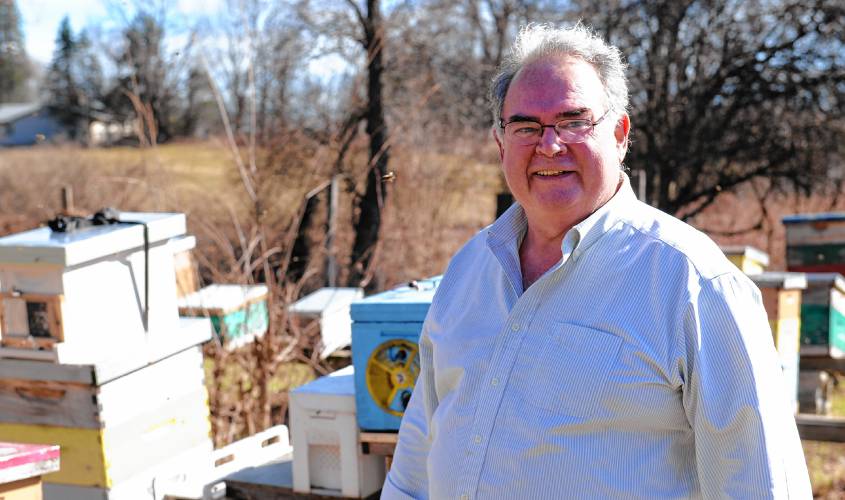 Dan Conlon in his bee yard.

Greenfield Recorder (MA) Senior Writer Richie Davis, who has reported on agricultural issues for over 40 years, will be honored as a CISA “Local Hero” along with Bonita and Dan Conlon of Deerfield’s Warm Colors Apiary, the agricultural organization announced Friday.

The awards, to “honor farms or individuals who exemplify CISA’s mission of strengthening farms and engaging the community to build the local food economy,” are scheduled to be presented at Thursday’s annual meeting at The Garden House at Look Park in Northampton.

“As we celebrate 25 years of supporting local farms and building a resilient and diverse local food system, we look forward to gathering with our members, supporters, and partners. We will reflect on what has worked over the last quarter-century, and the challenges and opportunities ahead,” said Philip Korman, executive director of Community Involved in Sustaining Agriculture, in announcing the annual awards.

Davis, who created an energy and environmental reporting beat at the newspaper when he first arrived, has won numerous awards for his agricultural reporting, including two Associated Press New England awards for overall agricultural coverage, in 2010 and 2011.

Davis, who joined the Recorder Staff in 1976 after several stays as a guest on a Shelburne dairy farm, “has been reporting on Franklin County and the surrounding region for over 40 years,” wrote CISA, “but it’s not just longevity that makes him stand out: his deep care for local farmers and farms and his dedication to clear communication about complex issues are what make him a Local Hero.”

The Conlon’s started Warm Colors in 2000, and “have set a high bar for local honey production, educated countless new beekeepers, and emerged as leaders and advocates in the beekeeping community,” according to CISA.

The apiary is established as “one of the best-known and most highly-respected beekeeping and honey producing operations in the area. Their honey, honeycomb, beeswax products, and more are sold out of the small farm store on their property in South Deerfield, and directly to grocery stores, restaurants, and dining services including UMass Amherst and Mount Holyoke College.”

Conlon himself manages about 1,000 hives — several hundred of them on the South Deerfield apiary site, with others around the region to help provide farmers with pollination. As part of the business supplying bees and equipment to beekeepers around the Northeast, he brings 1,000 packages of bees and starter kits from Georgia to fill hives. He is also the President of the Russian Bee Breeders Association.

The Conlon’s also offer beekeeping classes, workshops and lectures. And they advocate for the proper breeding and care of bees, which are under serious threat, posing a great risk to the food supply.