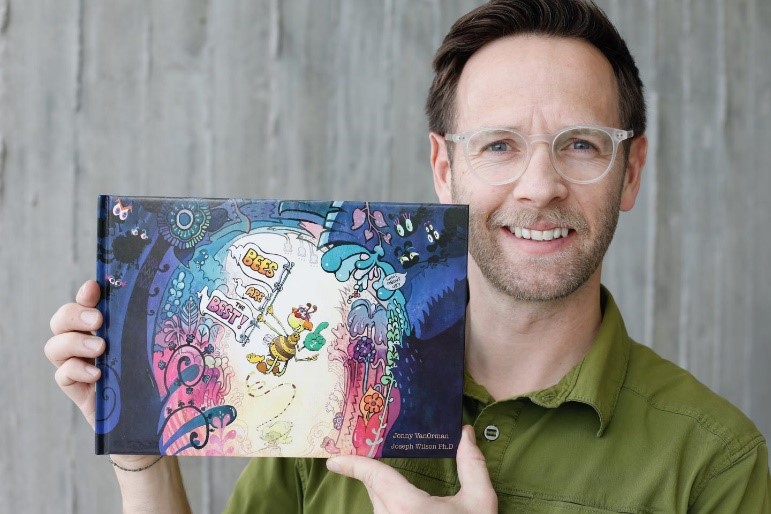 LOGAN, UTAH, USA — Utah State University scientist Joseph Wilson is on a mission. The conservation biologist wants to encourage efforts to protect bees, but realizes a lot of people know little about them.

“Most people have a bee sting story or they know some bees produce honey,” says Wilson, associate professor in the Department of Biology at USU Tooele. “Most are familiar with at least honey bees and bumble bees.”

But those are just two of the more than 4,000 bee species living in North America.

“As an academic, I’ve taught college classes on bees and written scholarly papers, but I’d like to reach more people,” says Wilson, associate professor in the Department of Biology at USU Tooele.

Among those people are children.

“If we want to conserve bees, teaching our rising generation may be the best strategy,” says Wilson, himself a dad of young children.

And what better way than through a storybook?

Wilson teamed with illustrator Jonny VanOrman to create “Bees are the Best,” a colorful picture book geared to preschoolers through fourth graders.

“Jonny is an artist and illustrator, as well as a storyteller, and he helped me convey important concepts about bee diversity in a welcoming, accessible format,” Wilson says.

The story, he says, revolves around a young honey bee, appropriately named “Honey,” who ventures into the world and discovers not everyone is like her.

“Along with our young readers, Honey learns about bee diversity and why her life, though wonderful, isn’t necessarily the only way to live,” Wilson says. “She discovers unexpected benefits of a community with members of varied talents.”

Readers may recognize VanOrman’s style from his previously published works, including illustrations of characters in Nickelodeon’s Sanjay and Craig series and Amazon Originals’ Costume Quest.

“Jonny and I experimented with characters that are fun and inviting, yet still somewhat scientifically accurate,” Wilson says.

He says an added section at the end of the story provides facts and actual photos of the varied bees in the story, paired with their illustrated characters.

“Bees are the Best,” available from Amazon.com, isn’t Wilson’s first foray into publishing or public outreach. In 2016, the USU alum, who earned bachelor’s and doctoral degrees from Utah State in 2005 and 2010, respectively, published “The Bees in Your Backyard” with fellow Aggie alumna Olivia Messinger Carril ’00, MS’06. The North

“With our complicated jargon, we scientists sometimes ‘talk over’ people,” he says. “My goal is to make science communication more understandable.”