Defra has issued its National Pollinator Strategy: Implementation Plan update a year on from the initial work, updating on its neonicotinoid strategy.

The National Pollinator Strategy (NPS) was launched in November 2014. It is a statement of collaborative action and cooperation between Government and other organizations to protect the future of pollinators. This Implementation Plan sets out how Defra will deliver the actions in the strategy and monitor their impacts.

Defra said: “Work is also progressing on determining the effects of neonicotinoids on wild and managed pollinators in field conditions through industry and research council funding, and on assessing the impacts of restrictions on neonicotinoids on farmers’ decisions on cropping and pesticide use. The industry field trials are part of a pan-European study to inform the European Commission’s review of the science following its restrictions on the use of three of these pesticides on crops visited by pollinators. In a separate study, Defra is assessing the levels of neonicotinoids in pollen and nectar of field margin and hedgerow flowers favoured by bumblebees that are found alongside treated crops.”

The themes from the strategy form the basis of the Plan. Under five key themes, there are 23  policy and 11 evidence actions.

Defra’s report stated: “Loss of habitat was identified as a likely main cause of pollinator declines. Thus key actions focus on expanding food, shelter and nest sites. Our call to action, Bees’ Needs: Food and a Home, gives practical and simple steps to help provide pollinators with food and shelter.”

Defra said progress included A Bees’ Needs website being set up, hosted by the Wildlife Trusts, to provide further information and encourage people to take action to provide pollinators with food and shelter. The website includes information sheets on creating habitats for pollinators on farms, in transport corridors, on industrial sites, in gardens and in woodlands.

The department has written case studies and run award and awareness weeks of pollinators.

Defra is also working with large-scale land managers to agree actions to support pollinators, and have received support from the Church of England, Highways England, Network Rail and the National Trust among others. Retailers, DIY outlets and garden centres have been encouraged to promote pollinator friendly displays in April and the autumn, says Defra.

Defra has collaborated with Keep Britain Tidy to introduce the first Pollinator (Bees’ Needs) award for the Green Flag Award scheme, and worked with Department for Communities and Local Government (DCLG) to include information on pollinators in their planning guidance under ‘Biodiversity, ecosystems and green infrastructure.’

Defra is working with Cambridge and Bristol Universities to organise knowledge exchange events.

The new Wild Pollinator and Farm Wildlife package was included in the Countryside Stewardship Scheme launched in July 2015.

The National Pollinator and Pollination Monitoring Framework has identified a range of potential monitoring methods that could be implemented by citizen-scientists and professionals and piloting of the methods has been undertaken at a range of sites in England, Wales and Scotland. During 2015, a plan is being developed to implement the results from the project and put in place a framework for monitoring pollinators and pollination services for the future. Defra is funding a project to enhance the understanding of the social and cultural values of pollinators. This aims to improve the way in which these (non-monetary) values are taken into account in policy development, decision-making and evaluation. Defra has partnered with the Natural Environment Research Council (NERC) to fund a taxonomy research fellow and studentship to develop new rapid methods of species identification, such as DNA sequencing. This work will utilise specimens collected as part of the Insect Pollinators Initiative to help develop the methods; the specimens will be archived at the Natural History Museum. If successful, these new analytical techniques could be applied to samples collected under a national pollinator monitoring framework. Defra has been working with external partners to progress understanding of volunteer motivations, the value of pollination services for crops and wild plants and improving the quality and relevance of data coming from existing monitoring schemes.

Defra is working on the manifesto commitment to develop a 25 Year Environment Plan, and Defra will “make sure that this recognises the importance of pollinators, and takes into account the objectives of the National Pollinator Strategy”. 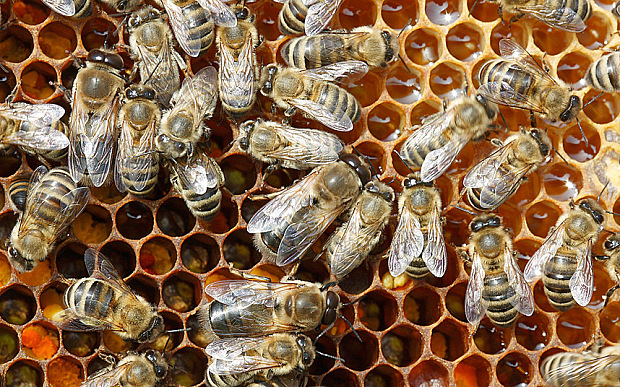 Homeowners across the country are getting together to save Britain’s dwindling bee population.

The announcement comes as research finds Britain’s bee population is plummeting and Honeybee colonies have slumped in the UK from 250,000 in the 1950s, to fewer than 100,000 today.

Many British apple crops, for example, which previously relied on honeybees, are now almost exclusively pollinated by a handful of wild bee species.

The Environment Minister will say the progress has been spearheaded by the government’s National Pollinator Strategy, which has encouraged a number of retailers and schools to set up a range of initiatives to encourage bee pollination.

The strategy, which was launched last year, encourages everyone to support pollinators by taking five simple steps to help pollinators known as the ‘Bees Needs’.

The government say as much as one third of the food we eat is pollinated by bees and estimate the value of insects pollinating crops and plants amounts to hundreds of millions of pounds.

Speaking at a Bee Summit organised by Friends of the Earth and the Women’s Institute, Mr Eustice said: “Protecting our pollinators is a priority for this government.

“They are an essential part of our environment and play a crucial role in food production.

“Our National Pollinator Strategy highlighted that everyone, be they landowners, councils, or window-box gardeners can do their bit to give a boost to our bees.

“The range of outstanding initiatives that have since taken off are a great testament to our country’s commitment to improving our environment and helping bees and other pollinators thrive.”

Earlier this year researchers at the University of Reading found that bees contribute £651 million to the UK economy a year, £150 million more than the Royal Family brings in through tourism.