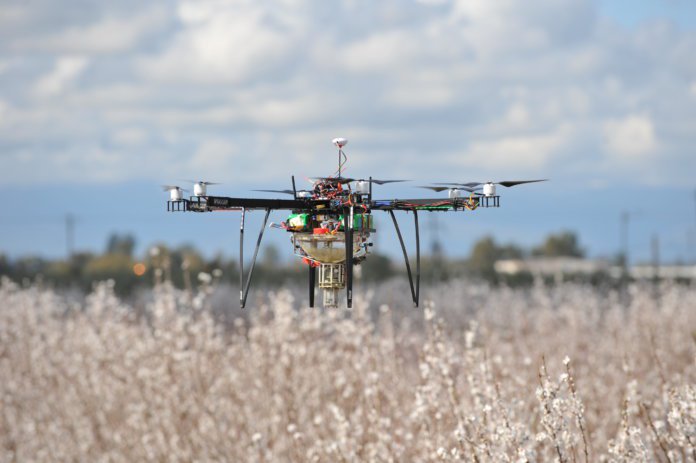 With bee populations continuing to decline, farmers, conservationists, and technologists alike are busy searching for a solution to help carry out pollination. A New York-based company recently lent a high-tech hand to assist a local apple orchard pollinate its 300 acres of tasty crops. The Beak & Skiff Apple Orchard in LaFayette called in startup Dropcopter and its pollen-spreading UAVs (unmanned aerial vehicles) to perform the world’s first apple orchard pollination by drone.

“Since 2015, we have been pollinating almond orchards with drones,” co-founder and CTO Adam Fine told Digital Trends. “We have a patent-pending device which accurately distributes a measured amount of pollen directly over the tree canopy. The drone flies an autonomous prewritten mission optimizing its speed to deliver the most effective application. We are the first real-world testing of automated aerial pollination in the nation.”

Pollination by drone isn’t the only alternative to insect pollination, but it may just be the most efficient current solution. Alternatives include using large tractor-mounted liquid sprayers or leaf blowers driven on quad bikes. Both of these are problematic due to the lack of reach and, in the case of liquid sprayers, the time-sensitive nature of the pollen once it gets mixed with liquid.

Dropcopter’s drones, meanwhile, can cover 40 acres per hour, and can double the pollination window by also flying at night. This is one advantage they even have over bees since bees don’t fly at nighttime, when flowers remain open. At present, the company is seeking funding to help further improve its drone’s flight path efficiency.

“One-third of all food products rely on insect pollination,” Fine said. “Over the past 25 years, the world has lost one-third of its insect biomass, which is a scary figure since 80 percent of all species on Earth are insects. At the same time, rising populations and changing climates mean we’re going to have less arable land and fresh water to feed the 9 billion people that will be on this planet in the next 50 years. We are going to have to farm far more efficiently with far fewer resources to meet the 60 percent increase in crop production necessary to feed those 9 billion people.”

Using drones to pollinate crops doesn’t mean we shouldn’t try to get to the bottom of the current crisis affecting bees. But just like other forward-looking projects such as robot bees (yes, really!), drones like Dropcopter’s could serve as a useful supplement for when bees are unavailable or weather prevents them from flying. Since a 1,000 acre farm can spend $400,000 on honeybees alone each year, they could even turn out to be a cost saver.

To view the Dropcopter actually pollinating that orchard, click this link or paste it into you’re your viewer. https://www.digitaltrends.com/cool-tech/apple-orchard-pollinated-drones/

By: Larry Connor In Nature In Nature, queen replacement is a family event. When a queen is being a replaced, the worker bees recognize…