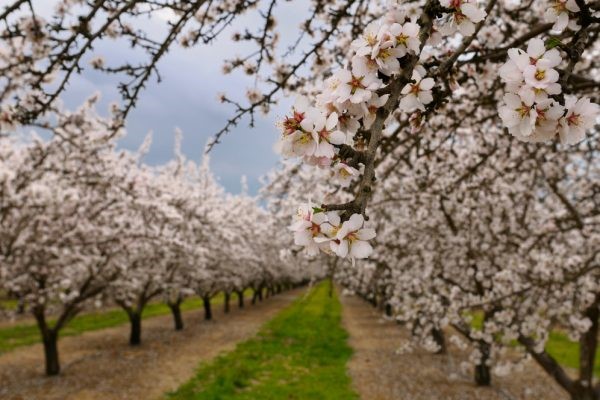 The Almond Board of California has committed to four new as sustainability goals that including achieving zero waste from its US orchards, reducing water used in production, and enhancing pest management tools.

As part of the initiative, which coincided with national almond day on Saturday, 16th February, also includes moves to help improve local air quality, as part of a holistic approach to minimse growers’ environmental impact.

Almonds have been named as the most popular inclusion within confectionery ranges, with 80 percent of the world’s supply coming from California, which has traditionally placed a strong emphasis on managing resources efficiently.

As the almond board, representing over 6,800 farmers, explained, its latest four goals that build on decades of previous achievements and further demonstrate the industry’s commitment to growing almonds in better, safer and healthier ways, while protecting local communities and the environment. The Almond Orchard 2025

For over four decades, almond farmers and processors have funded $80 million into scientific research schemes in a bid to improve the quality of its products and environmental management.

“We’ve always been focused on minimising our environmental footprint and being good neighbours—and we have the track record to prove it. But for the first time, we are publicly setting goals for how we will farm in the future and committing to transparently reporting on the progress we are making,” said Holly King, chair of the Almond Board of California. “There’s no doubt these goals will be challenging, but that’s a responsibility that comes with leadership and a commitment to innovation. We’re excited to be embarking on this journey.”

It is also examining greater markets for used almond shells, improved habitat management including promoting beneficial insects and improving air quality through adapting harvesting times and methods to avoid nuisance to neighbouring areas to production sites. It has committed to reducing dust by 50% during harvest times.

“We try to be a good steward of the land by doing more with less—less inputs, less applications, less trips into the field, obviously less water,” said Brian Wahlbrink, almond farmer in Stanislaus County and chair of the Almond Board’s Harvest Workgroup. “These goals will drive us to substantive improvements, building on past achievements and sharing our progress as we work toward 2025. I am very confident in where we are going.”

In addition to the 2025 goals, California almond farmers continue to support research in other areas critical to success, investing in seven new projects focused on honey bee health this year alone. This effort builds on a legacy of $3.2 million invested in 120 research projects since 1995 addressing the five major factors impacting honey bee health.

As part of its ongoing commitment to bee health, the Almond Board has also developed a comprehensive set of Honey Bee Best Management Practices for California almond farmers. Widely adopted, these best practices are constantly evolving to ensure the safety of honey bees during almond pollination and beyond.

“By working collectively towards the Almond Orchard 2025 Goals and key areas such as bee health, we are ensuring that we can farm here in California for the long haul. That means taking care of the land to the best ability we can and farming responsibly. This commitment is based on a history of improving growing practices and will truly impact how we farm in the future,” said Almond Board of California president and CEO, Richard Waycott.