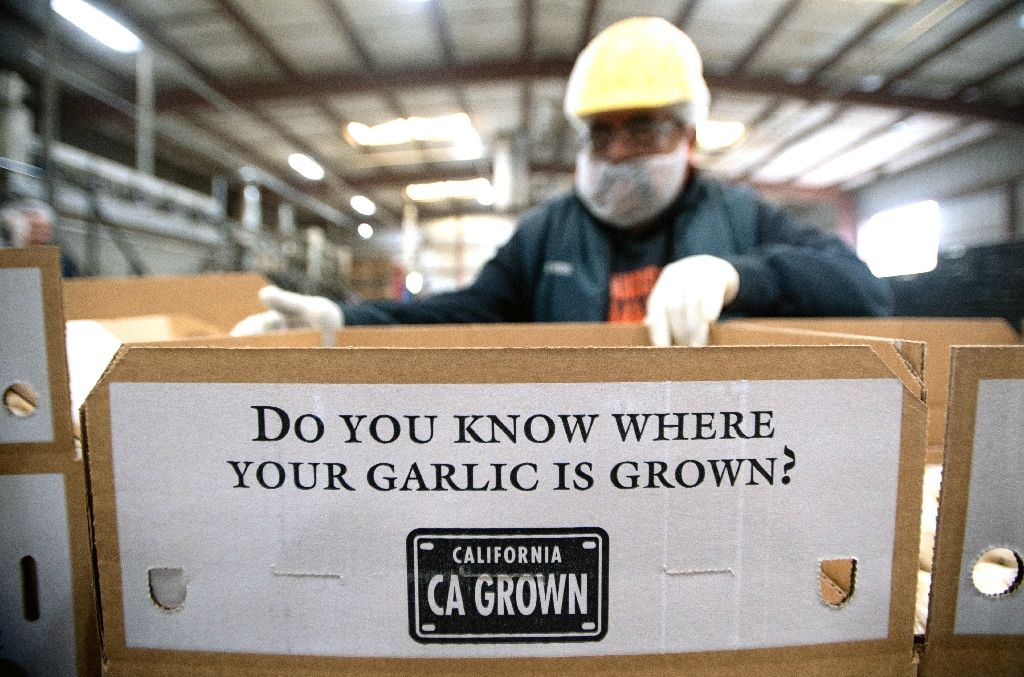 Employees on the production line at Christopher Ranch in Gilroy, California — the local garlic industry is reaping the benefits of US trade tariffs against China because it makes local produce more competitive in the United States (AFP Photo/Josh Edelson)

As most US farmers feel the brunt of the trade war with China, some, like garlic and honey producers who have struggled for years, are applauding new, higher tariffs on Chinese goods.

Though nearly all garlic consumed in America was grown in the US prior to 1993, that changed almost overnight when Chinese exporters began flooding the US market with their product, all but wiping out garlic growers across the country, Christopher said.

“Back in the 1990s, there used to be 12 commercial garlic farms in America and now there’s only three,” he said. “And that’s due to the illegal dumping of Chinese garlic.

“Since 1993 they have illegally flooded the US market with cheap garlic below the cost of their production.”

Under sweeping trade duties imposed by the Trump administration — part of an aggressive strategy to force Beijing to end what the US considers to be unfair practices — tariffs on Chinese garlic increased from 10 to 25 percent on May 10.

Christopher, whose company grows about 100 million pounds of garlic annually that represent 30 percent of total US consumption, said that has led to prices more in line with US growers who have higher labor costs and have struggled over the years to stay afloat.

A box of about 30 pounds of Chinese garlic that sold for some $25 before the latest tariffs increase is now selling for about $45.

“This has brought immediate relief for our industry,” said Christopher, whose family-run business is the largest employer in Gilroy, located south of San Francisco, with about 1,100 people working there full-time.

“For the last 25 years, it’s been a game of whack a mole,” he added, describing the difficulty in going after Chinese exporters dumping their produce on the US market for a fraction of the price of US-grown garlic.

“By the time the US Department of Commerce identified the Chinese exporter violating the US law, that company would fold and pop up as a brand new company.

“And often times many of the companies in China were subsidized by the Chinese government.”

Honey producers across the United States who have helplessly watched over the years as China blew them out of the market are also thrilled about the tariffs increase.

“It’s been probably 30 years that China’s been trying to destroy our domestic beekeepers by selling large amounts of honey at prices way below what we can produce at,” said Kelvin Adee, head of the American Honey Producers Association.

“It costs the US producer around $1.75 to $1.85 to produce a pound of honey,” said Adee, whose company Adee Honey Farms is the largest commercial beekeeping operation in the US with some 100,000 beehives.

“They’re bringing it in here under a dollar and there’s no way we can compete with that.”

Adee said that while the US is heavily dependent on imported honey — it consumes around 600 million pounds of the product a year and only produces between 150 to 170 million pounds — tariffs are needed to ensure fair trade practices.

Trump has imposed 25 percent tariffs on a total of $200 billion in Chinese goods, and has threatened even more — while Beijing has hit back with tariffs of its own, largely targeting soybeans and pork.

But despite hopes the tariffs will even the playing field, farmers like Adee and Christopher are well aware that Chinese producers can still beat the system by using evasion schemes.

And they realize that other farmers across the country, like soybean and hog farmers, are paying a steep price because of the spiralling trade dispute.

“We know that a lot of farmers in the middle of the country are hurting and our hearts go out to them,” said Christopher.

“And we know that a 25 percent tariff isn’t a long-term solution,” he added. “We know that at the end of the day there will have to be some kind of negotiation between China and the US.

“But it’s our hope that there will be enhanced enforcement on both sides to make sure that their illegal dumping stops.”

Check out the next LIVE KIM&JIM Show, on June 18, 2018. Kim and Jim are first going to take a look at the 4 bee hives on the A. I. Root Company property, right next to A. I. Root’s Home. There are 2 overwintered colonies, and 2 were installed as packages this spring. What’s up with the old and the new this spring? We’ll find out. Then, they’ll take a look at the new polystyrene hive just installed this spring to begin looking at thermal efficiency in a beehive. A new hive, with a new package will be the center of attention for a bit.

Then, because it’s Pollination Week, KIM&JIM will take a breather after all that work, and sip a cool one on the A. I. Root’s front porch and talk about all of the historical figures that have come and gone from that porch over the years, sort of a sneak preview of THE HISTORY OF AMERICAN BEEKEEPING event coming your way in October. And, because it’s pollination weeks, they’ll discuss a bit about the pollinator gardens, that they will visit later this summer, and about some of the activities going on around this most important subject.

After registering, you will receive a confirmation email containing information about joining the webinar.