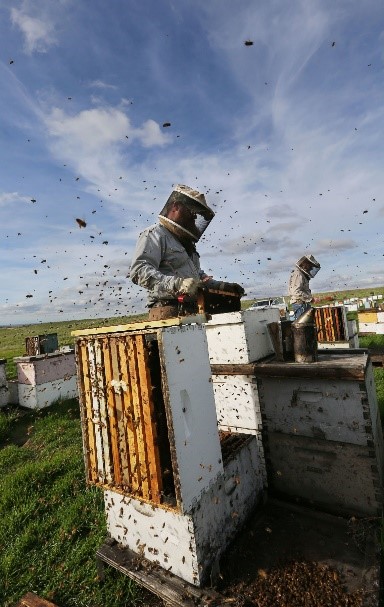 Brothers Matt and Evan Nissen of 5 Star Honey Farms check on bee colonies at one of the 25 sites where they store bees. Healthy bees are a critical element to Kern’s $1.2 billion almond harvest. 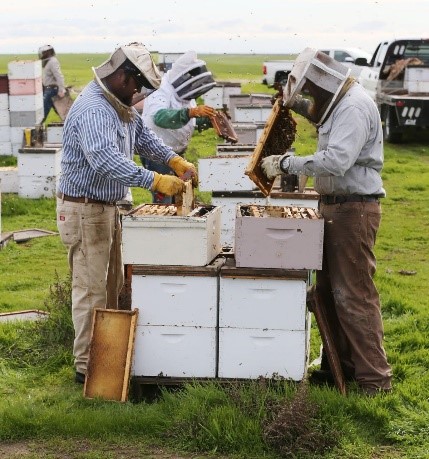 A sharp drop in the price of honey threatens new harm to an already battered industry that every year provides an integral service to Kern County’s $1.2 billion almond industry.

U.S. beekeepers say a recent glut of honey imported from Asia and elsewhere has caused prices to plummet during the last 12 months, past the point at which U.S. producers can hope to make a profit. Honey’s flagging popularity as a sweetener has also lowered honey prices.

The situation is not likely to impact the pollination expected to take place next month as almond orchards bloom across the Central Valley.

But there is expected to be some effect on the almond industry eventually if low honey prices persist.

Just what that impact would be, and whether it’s good or bad for almond growers, is unclear.

Because beekeepers on average get about a third of their annual income from honey production, according to Rabo AgriFinance, there is some concern the price drop will force some operations out of business.

That could lower the supply of pollinators available to service local almond orchards. It’s also possible, however, that beekeepers leaving the business would sell to others who would simply absorb the extra bee colonies.

On the other hand, some are speculating that beekeepers less focused on honey production would respond by turning their attention more squarely toward the Central Valley’s annual almond pollination, which Rabo AgriFinance said makes up close to half of beekeepers’ income.

“If there’s less reliance on honey as a revenue stream, then that makes the pollination part of the game that much more critical” to beekeepers, said Roland Fumasi, senior analyst at Rabo AgriFinance.

But Montana beekeeper Bill Dahle, who expects to have about 10,000 colonies for rental to local almond growers next month after losing 40 percent of his inventory last year, said lower honey prices will “absolutely” lead to fewer bees available for pollination in the future.

“There’s no way that pollination by itself will pay the bills,” he said. “You just cannot do it on pollination (income) alone.”
Shafter beekeeper and bee broker Mike Mulligan agreed, saying the lower honey prices will remove about a quarter of some beekeepers’ annual income and “that’s going to be enough to knock some guys out.”

According to U.S. Department of Agriculture data, honey prices paid to producers averaged $2.17 per pound in 2018. Although USDA’s official 2019 price report is not yet available, Fumasi said recent price reports show U.S. domestic prices have fallen to between $1.80 to $1.25 per pound, depending on the type and source.

Beekeepers say they do sometimes have to decide between focusing on honey production and preparing for the almond pollination. They say their actions can have implications for the availability and price of rental bee colonies, which for almond growers have increased from $50 or lower as recently as the early 2000s to about $200 this year.

The way this selection generally happens is that beekeepers trying to maximize honey production tend to keep their bee colonies large and intact through summer. But if the desire is to prepare for the almond pollination, where the emphasis is on offering high volumes of colonies for rent, beekeepers often divide their colonies in half and introduce a second queen.

The drop in honey prices has come as beekeepers continue to struggle with massive die-offs believed to be caused by a variety of factors including an insidious parasite called the varroa mite. Pesticides and fungicides are also seen as a threat to bee health.
Adding to beekeepers’ troubles are high trucking costs and a tight market for experienced labor.

At the same time, almond acreage in California — far and away the leader in global production — has risen significantly in recent years, even as international tariffs have limited prices.

The added acreage has put pressure on beekeepers to deliver more and more pollinators. But that has become difficult in light of annual colony losses.

Josette Lewis, director of agricultural affairs at the Almond Board of California, said she was unaware of growers having trouble finding sufficient numbers of bee colonies this year.

The Wonderful Co., one of the world’s largest almond producers, said it expects to have enough bees to pollinate its orchards next month.

“While it’s still a bit early for us to know how well all of our bees have fared,” spokesman Mark Carmel said by email, “initial indications are that this will be an average or better than average year.”

City of Orange beekeeper Steve Wernett envisioned a situation in which Midwestern beekeepers’ lack of income from honey sales keeps them from being able to pay to transport their bees to California for the almond bloom, leading to higher bee rental prices in Kern.

Then, the following year, he said, there could be an overcompensation in which beekeepers try to capitalize on the higher pollination prices, leading to a glut of bees and lower pollination fees.

He blamed the lower prices on major U.S. retailers insisting on lower prices. He said that, in turn, leads to blending of domestic and imported honey, resulting in lower quality.

“I don’t know how it’s going to be rectified,” he said.