To bee, or not to bee, a question for almond growers

By: University of Hawaii at Manoa 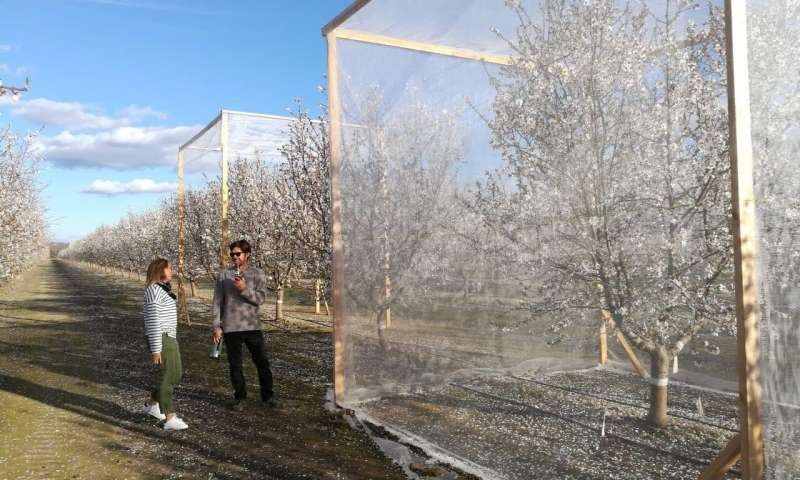 Pollination by bees is vital even when crops are assumed to be pollinator independent. That’s according to a study co-authored by Ethel Villalobos, a researcher in the University of Hawaii at Manoa’s College of Tropical Agriculture and Human Resources Department of Plant and Environmental Protection Sciences and lead of the UH Honeybee Project.

In a paper published in the February issue of Nature Scientific Reports, Villalobos collaborated with a team comprised mainly of Argentinian researchers and were led by Agustin Saez and Pedro Negri, co-founders of a start-up company called BeeFlow. Their series of field experiments examined the true “independence” of a new self-fertilizing almond variety called ‘Independence.’

Eighty percent of the world’s almonds are produced in California. The crop requires the pollination services of two million colonies of honey bees during the flowering season, which growers rent from beekeepers. Pollinating almonds requires the equivalent of moving half of all managed bees in the U.S. to California for a few weeks.

Besides the cost and effort, the pesticides used on almonds may be dangerous to bees. Thus there is intensive research going into breeding pollinator-independent almonds, which could cut the bees out of the equation entirely. However, this study shows the solution is not that simple.

“This article highlights the danger of misinformation—the variety is marketed as ‘self-fertilizing,’ but growers don’t know they will get less yield without bees,” Villalobos explained. “This could also generate conflicts between almond growers. If one grower’s self-fertile almonds are planted near another’s bee-dependent varieties, the bees will visit both, and growers who rent bees will be paying for services benefiting others and getting less for their own crops.”

Another potential problem is if allegedly pollinator-independent varieties continue replacing pollinator-dependent varieties, many beekeepers may lose one of their key annual incomes, threatening their financial well-being. This could lead to the loss of one of the most important incentives for maintaining a beekeeping industry in the U.S. and the narrowing of a work source for beekeepers.

Most important, Villalobos concluded, is that bees have played an important role in keeping agricultural pesticide use in check, and attempting to eliminate them removes this check.

“Since they are recognized and appreciated by most people, honey bees have helped raise awareness of how farm health is related to our own health,” she said. “We tend to lose sight of the benefits of protecting our natural world. Bees have helped us face that there are choices to be made.”