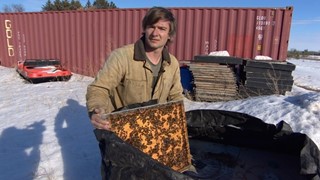 Simon Lalonde takes an early peek at one of his hives. They’re wrapped with insulation for the winter. (CBC)

The flight from Nicaragua appeared on the arrivals board at the Saskatoon airport as WG 2893. It may have deserved something a little catchier, given why its passengers were coming to Canada. Perhaps, the Flight of the Beekeepers.

The flight carried 138 seasonal workers, 48 destined for honey bee farms in Saskatchewan and the remainder for farms in Manitoba.

The Canadian Honey Council sponsored the charter, airlifting in the workers to help with the 2021 honey season on the Prairies, including 18 Saskatchewan farms. It’s the first of three such flights scheduled for this spring.

Lalonde says the industry would like to hire locally, but beekeeper hours are a tough sell.

“In the summer it’s a lot of hot work, and you get stung,” he said in an interview.

“So it’s not an easy job. And it’s tough to find Canadians who are willing to commit to six days a week, 12 hours a day, through the best parts of our lake season.” 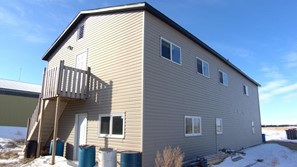 The honey industry started importing workers from Mexico, the Phillipines and Nicaragua about 20 years ago. They arrive in March and stay to October, many of the workers now veterans of multiple seasons.

This is important, Lalonde said, because successfully raising honey bees is both labour and science intensive.

Bees are living creatures in closed environments — hives — and they are susceptible to disease. Evaluating the health of hives, and properly feeding and caring for the bees, requires experience.

The pandemic has thrown an extra wrinkle into the program. The incoming workers need to be quarantined for 14 days before they can get out to the hives. This is the second year they’ve had to do so, as the pandemic was underway by the time last summer’s workers arrived.

On Lalonde’s farm, he has a quarantine house for his five workers. Each person has their own room and they’re checked daily to make sure everything is all right.

“We make sure everyone’s still feeling healthy, we see if they need anything. They’re not allowed to go grocery shopping, so the employer has to go out and purchase the groceries,” he said.

The workers are all tested for COVID-19 before leaving Nicaragua, again on arrival in Canada and then again 10 days later.

The house has wi-fi and the workers, although completely locked down indoors, are able to play video games and text with their families back home.

Lalonde said it’s challenging to be kept cooped up for the two weeks. He said the workers last year were more than ready to get out on the farm and start working once the quarantine was over.