Scientists follow the bees to learn about colony survival 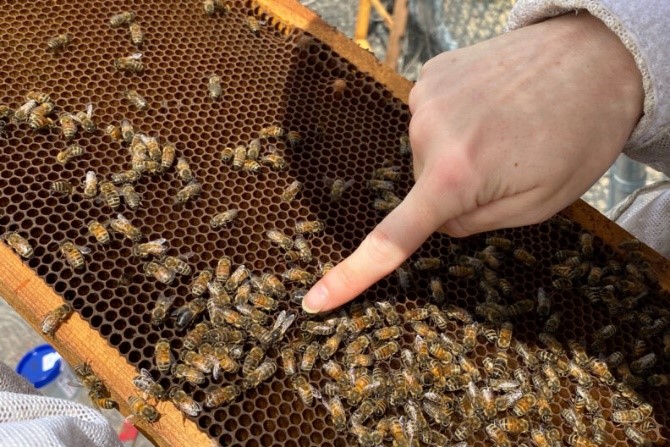 Trucked in great stacks of hives, bee colonies are dispersed across hundreds of miles. It’s very difficult for beekeepers to track the impact from pests, diseases, pesticides, and environmental factors at every location.

This spring, scientists at Washington State University are following the journey and inspecting hives to get a clearer picture of colony health across the annual cycle of pollination.

Funded by a $1.1 million grant from the U.S. Department of Agriculture’s Foreign Agricultural Service, the team is partnering with beekeepers to build a predictive model and decision aid system that helps manage and protect pollinators.

Pollination is vital to most fruit and seed crops, but the pollinators themselves face a tenuous existence: one recent study found 43% of managed bee colonies died from 2019 to 2020.

On the move themselves, beekeepers often have a hard time tracking the location, health, and treatment of each colony. This can lead to overuse of chemicals and the buildup of pesticides.

“Once a beekeeper puts colonies in an orchard for pollination, bees are really at the mercy of the farm’s practices, and those of neighboring farmers,” Olsson said.

“If a nearby farmer sprays a pesticide that is harmful to bees, and wind blows residues toward the crop where bees are located, the bees could be harmed or killed.”

Chemicals aren’t the only threat. If weather is exceptionally rainy or cold, flowers won’t bloom, meaning less food for bees.

“Beekeepers are often dealing with one or more of these factors, and some of the additive effects are unknown,” Olsson said.

To understand the relationship between location, environment, threats, and survival, WSU scientists want to create a standardized metric of colony health.

Partnering with Washington state beekeepers and a private technology company called Nectar, the team will follow colonies throughout their pollination journey over three years, testing and ground-truthing pesticide exposures and the availability of food sources across the landscape.

The study began while bees were visiting California’s almond crop earlier this year, and has continued as they move to various western crops, ultimately ending up in Montana and South Dakota in early autumn for flower crops such as clover. Bees will also be checked as they overwinter in their hives.

Scientists are checking hives and collecting monthly data on environmental and colony health, including the health of the queen, number of bees, food levels, and disease symptoms. They are also sampling pollen stores for pesticide residues.

Data will be used to create an overall score called Colony Health in Place and Season, or CHIPS, which will be used to develop a system that can predict and model colony health and survival. The system could tell a beekeeper if a given site and season will offer enough resources to sustain their bees.

“With colonies being constantly moved to new locations, there are many difficult-to-follow factors going back through the lifetime of the hive that may contribute to colony death,” Olsson said.

“Our technology could make things easier by allowing researchers to monitor thousands of hives remotely, and let beekeepers track their colonies in a streamlined way,” they added. “We’ll have a better understanding of how to keep hives healthy throughout the season.”