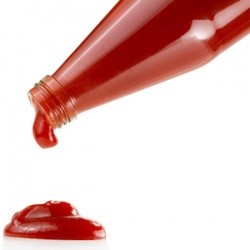 It is nearly impossible to get every last drop of liquid foods out of their containers. Ketchup and syrup are among the worst offenders. In fact, up to 15% of liquid foods can be wasted due to such inefficient packaging.

Superhydrophobic coatings, which are extremely water-repellent, have been proposed as a fix. A few years ago, a company called LiquiGlide made a big splash (no pun intended) with a video that showed ketchup sliding effortlessly out of a bottle. Their technology employs a “liquid-impregnated surface,” which as its name implies, involves a specialized surface that is able to contain within it a second liquid layer. In 2015, LiquiGlide signed a deal to license its technology to a European company that makes mayonnaise.

Now a separate team of engineers, mostly from Colorado State University, has devised its own solution to the world’s sticky container problem. Their superhydrophobic material is “fabricated with FDA-approved, edible materials using a simple, low-cost, scalable, single-step process.”

The team modified two natural products, carnauba wax and beeswax, by subjecting them to a spraying process that imparted a novel micro-texture. Then, they showed how liquids behaved when placed on a slide coated with their special wax. See figure below.

(In this photograph, they used carnauba wax. The superhydrophobic surface caused the beading up of all of the tested liquids. From top to bottom and left to right: Coke, pancake syrup, Lipton tea, Gatorade, ketchup, water. As a nice touch, the entire slide is resting on top of orange juice.) Then, the scientists coated polystyrene cups with their wax and filled them with honey or chocolate syrup. Coated cups were easily emptied of their contents. (See below. This photograph depicts honey.)

The authors believe that their superhydrophobic coating will not only prove useful for liquid foods but for medicine as well. LiquiGlide has some competition.

Where would we ‘bee’ without THEM? Campaign highlights importance of pollinators. Evelyn Graham was selected as the district winner for the K–1st grade category….