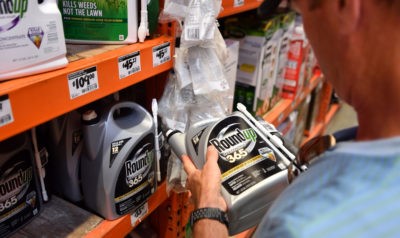 Is one of the world’s most widely used herbicides a danger not only to annoying weeds, but also to honeybees? While debates rage over whether certain powerful insecticides are responsible for so-called colony collapse disorder — or even whether bee populations are declining at all — recent research suggests that glyphosate, the active ingredient in weed killers such as Monsanto’s Roundup, could be having subtle effects on bee health.

Glyphosate has been in the news in recent months, but not for its possible harm to bees. Rather, some studies have suggested an association between exposure to glyphosate and higher risk of non-Hodgkin lymphoma (NHL), a cancer of the white blood cells. Glyphosate garnered headlines last August when a jury in California awarded groundskeeper DeWayne Johnson a massive judgement against Monsanto’s parent company, the German pharmaceutical giant Bayer. Johnson, along with more than 13,000 other plaintiffs, alleges that glyphosate caused his case of NHL.

But concerns about glyphosate are not limited to humans. Researchers have been accumulating evidence that glyphosphate may also be having deleterious effects on the environment and be harmful to fish, crustaceans, and amphibians, as well as to beneficial bacteria and other microorganisms in soil and water.

In recent years, a number of studies have concluded that glyphosate could also be hazardous to bees. Although the herbicide does not appear as toxic to bees as some other pesticides (notably neurotoxins known as neonicotinoids), researchers have found that glyphosate may impact bees in more subtle ways — for example, impeding the growth of bee larvae, diminishing bees’ navigational skills, altering their foraging behavior, or even disrupting their gut microorganisms, known as the microbiome.

The research is controversial because defenders of glyphosate use have long argued that it is benign in the environment. The herbicide is uniquely designed to target an enzyme that plants need to grow. That enzyme is essential to the so-called shikimate pathway, a metabolic process required for the production of certain essential amino acids and other plant compounds. However, the shikimate pathway is also used by some bacteria and other microorganisms, raising the possibility that glyphosate could have widespread and unexpected effects on a variety of natural organisms.

In a September study in the Proceedings of the National Academy of Sciences, Nancy Moran, an evolutionary biologist and entomologist at the University of Texas, Austin, and her coworkers found evidence that glyphosate disrupts microorganisms found in bees’ guts.

Mature bees have eight dominant gut bacterial species. Those strains are responsible for such benefits as promoting weight gain and providing resistance to harmful pathogens. The University of Texas team found almost all of them declined when the bees were exposed to concentrations of glyphosate commonly found in the environment. Young worker bees exposed to glyphosate were more susceptible to dying from infections. Moreover, the gut bacteria were more sensitive to the effects of glyphosate if the bacteria possessed an enzyme known to play a key role in the shikimate pathway.

Bayer disputes research findings suggesting Roundup or glyphosate is hazardous to bees. Utz Klages, Bayer’s head of external communications, says the “good news is that honeybee colonies are not in decline and rumors of their demise are greatly exaggerated.” Klages notes that regulatory authorities in a number of countries, including the United States, Canada, and the nations of the European Union, “have determined that glyphosate is safe when used as directed.”

A number of studies have suggested that glyphosate is not highly toxic to bees, including research performed by Monsanto and several other agrochemical companies. That research considered the “realistic worst-case” exposures to the herbicide and found no significant effect on bee mortality. Similarly, a series of studies led by Yu Cheng Zhu, a research entomologist at the U.S. Department of Agriculture, concluded that glyphosate did not seem to kill bees outright. “We did not find an unusual number of dead bees after spraying a bee yard with Roundup a few times each year,” Zhu said.

But Walter Farina, a researcher at the University of Buenos Aires in Argentina, says that the very fact that glyphosate is not immediately toxic to bees facilitates the harm it does. “Since glyphosate does not cause lethal effects, it can enter the colony and [be] assimilated by the younger individuals,” Farina says. “The negative effects of [glyphosate] are worse for younger bees, promoting an increased disorganization of the collective task within the hives.”

Farina and his team have looked at some of these effects in Argentina, where glyphosate is intensively used in agriculture. In a 2014 study, published in The Journal of Experimental Biology, they found that the “appetitive behavior” of honeybees — including how well they could detect sucrose and their ability to learn and remember where food sources were located — was significantly diminished after exposure to doses of glyphosate commonly found in farmlands.

In a second study, published in 2015 in the same journal, Farina’s team used harmonic radar to track how long it took honeybees to find their way back to their hives. They found that exposure to relatively low doses of glyphosate appeared to hinder the bees’ ability to navigate back to the hive, and concluded that glyphosate “impairs the cognitive capacities needed to retrieve and integrate spatial information for a successful return.”

In other research, scientists have found that glyphosate appears to interfere with the growth and survival of honeybee larvae. For example, in a study published last year in the Journal of Agricultural and Food Chemistry, Pingli Dai of the Institute of Apicultural Research in Beijing, China, and his colleagues found that elevated exposures to glyphosate can lower both the weight of bee larvae and the larval survival rate. This study also showed that glyphosate markedly decreased the diversity and richness of bacteria in the larvae’s intestines, indicators of reduced resilience.

As concerns about how glyphosate may be affecting honeybees mount, researchers are getting a boost from funding agencies that see this as an important research avenue. In March, the National Science Foundation awarded nearly $1 million in grant money to researchers at Virginia Tech and Eastern Washington University to further study the honeybee microbiome.