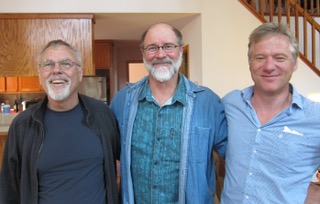 Newly published research by a team of Germany-based honey bee geneticists, collaborating with Robert Page Jr. of Arizona State University/UC Davis, offers new insights in the ability to modify and study the chromosomes of honey bees.

Martin Beye, a professor at the University of Düsseldorf, Germany and a former postdoctoral fellow in Page’s lab at UC Davis, served as the lead author of the research, “Improving Genetic Transformation Rates in Honeybees,” published in Scientific Reports in the journal Nature.

The work was accomplished in Beye’s lab in Germany and the Page labs.

“The significance of this paper lies in the ability to modify the chromosomes of honey bees and study the effects of individual genes,” said Page, former professor and chair of the UC Davis entomology department before capping his academic career as the Arizona State University provost.

“The honey bee genome,” Page explained, “is composed of about 15,000 genes, each of which operates within a complex network of genes, doing its small, or large, share of work in building the bee, keeping its internal functions operating, or helping it function and behave in its environment. The ability to transform, change, genes, or add or delete genes from chromosomes of bees, has been exceptionally challenging and the effort spans decades. Martin tackles problems such as this. He takes on the most challenging genetic problems and solves them.”

Beye was the first to map the major sex-determining gene for honey bees, considered one of the most important papers ever published on honey bee genetics. He “then moved on and developed a way to implement gene editing, being able to alter single genes within the genome,” Page related. “Now he has developed a method to introduce new genetic material into the honey bee.”

In their abstract, the six-member team wrote that “Functional genetic studies in honeybees have been limited by transformation tools that lead to a high rate of transposon integration into the germline of the queens. A high transformation rate is required to reduce screening efforts because each treated queen needs to be maintained in a separate honeybee colony. Here, we report on further improvement of the transformation rate in honeybees by using a combination of different procedures.”

Specifically, the geneticists employed a hyperactive transposase protein (hyPBaseapis), tripling the amount of injected transposase mRNAs. They injected embryos into the first third (anterior part) of the embryo. These three improvements together doubled the transformation rate from 19 percent to 44 percent.

“We propose that the hyperactive transposase (hyPBaseapis) and the other steps used may also help to improve the transformation rates in other species in which screening and crossing procedures are laborious,” they wrote in their abstract.

For their research, the scientists chose feral Carniolan or carnica colonies. Carniolans, a darker bee, are a subspecies of the Western honey bee, Apis mellifera.

Beye joined the Page lab in 1999 as the recipient of a Feodor Lynen Research Fellowship, an award given to the brightest young German Ph.Ds to provide an opportunity for them to work in the laboratories of U.S. recipients of the Alexander von Humboldt Research Prize. Page, who won the Humboldt Prize in 1995, continues to focus his research on honey bee behavior and population genetics, particularly the evolution of complex social behavior.

Following his postdoctoral fellowship, Beye returned to the Page labs at UC Davis and ASU as a visiting scientist. Beye spoke at UC Davis this spring as part of his Humboldt-funded mini-sabbatical, the guest of Page and hosted by the department of entomology and nematology. During his visit, he and UC Davis bee scientist Brian Johnson developed collaborative projects that they will begin in the spring of 2019.

“This is exactly what the Alexander von Humboldt foundation wants — to build and extend interactive networks of researchers,” Page said.