References to bees and honey in the three monotheistic religions 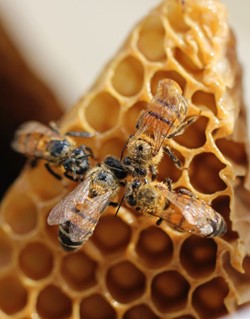 “Like a honey bee gathering honey from all types of flowers, the wise men search everywhere for truth and sees only good in all religions” (Hindu scripture Srimad Mahabhagavatam). The Hindus refer to honey as the “nectar of the sun.” When I came across this quote, I realized that I’ve never really thought about bees in depth. Sure we know they are essential to life, but who are the bees? Maybe you haven’t given them in-depth thought either.

As this quote was religiously based, I thought I’d start building my knowledge by looking at references of honey and bees in the three monotheistic religions of Christianity, Islam, and Judaism.

In Christianity, there are several references to bees and honey. Most refer to the sweetness of honey. However, a few, such as in Deuteronomy 1:44, bees are akin to armies that go against Amorites, which considers the power of bees. Indeed, the bee’s sting is symbolic of Jesus’ crown of thorns and dying on the cross, while the honey produced reflects the gentle characteristics of Jesus.

Curing the celebration of Rosh Hashana in September, apples and leavened bread are dipped in honey to symbolize hope and good health through the New Year. Honey is to remind Jews that goodness and abundance come from God’s grace. Cohen, in 1,001 Questions and Answers on Rosh Hashana and Yom Kipper, writes that honey is associated with manna – “sweet wafers.”

Perhaps, the most fascinating and directly meaningful lesson comes from Islam. In the Islamic holy book, An-Nahl translates to “The Bee,” a chapter that instructs Muslims to study and learn from the industrious bee and live like them. The bees’ gender assignment is female, which on the surface appears to be inaccurate. However, delving further Referee seems to indicate otherwise. I believe the intention was to draw attention to the importance of females; their female energy in the hive, or as in the case of humans, the home, and community.

Chapter 16 in “The Bee” is dedicated solely to bees with 16 words and 16 Arabic letters. Female bees have 16 pairs of chromosomes, and males have 16 chromosomes and hatched from unfertilized eggs, not dissimilar from how Jesus was born into this world. I found this connection to be particularly fascinating.

I know this information is the tip of the iceberg, and I’m not a theologian, so my understanding is rudimentary. Yet, I hope it whets our appetite for more knowledge. Honey references go back at least 4,000 years in written text. It may be that references to honey that far back is because it was the sweetener that best known at the time. This fact, however, doesn’t lessen the impact of the teachings and symbolism—another way we can learn from nature how to be the best humans.