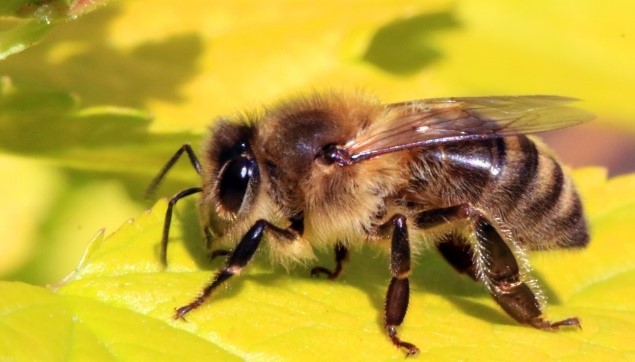 A recent study at RMIT University, Australia, led by Scarlett Howard and Adrian Dyer, has demonstrated the ability of honey bees to distinguish between numbers, suggesting that they are more accomplished at quantity evaluation than previously thought.

The study, which was also conducted by Jair Garcia, Andrew Greentree, and Aurore Avarguès-Weber, took place in France, in April, to ensure enough bees would be present for a representative sample size. It involved a Y-shaped maze and two groups of honey bees. Each end of the maze featured a different card: one with four shapes, and one with a number of shapes ranging from one to ten, with four treated as the “correct” response. In the first group, bees that selected the correct response were rewarded with a sip of sugar water, and given plain water when the other option was chosen. In the second group, the plain water was replaced with a bitter-tasting quinine-water.
Once the bees had been trained to choose four, the researchers made the other option more specific: the subjects had to choose between a four-shape card and an eight-shape card each time, with their success – or lack thereof – recorded.

Then, over several stages, the shape numbers on the two cards became closer together. After four and eight, the bees chose between four and seven, and so on.

The results, published in the Journal of Experimental Biology, indicated that using quinine water as a response to the wrong choice, instead of plain water, was a better method of training, as the honey bees in this group were more successful in distinguishing between numbers, including between four and five – the most difficult comparison. By contrast, the other group’s subjects struggled to differentiate between four and eight. The conclusions of the new study shows that honey bees can learn the rules of “less than” and “greater than” and can then apply these rules to evaluate numbers from zero to six. Previous studies had shown that they were capable of distinguishing between three and four, similar to other creatures such as angelfish and guppies. However, this research also suggested that honey bees struggled with quantities between four and five, possibly due to the use of plain water rather than quinine water for incorrect choices. The earlier method simply rewarded the correct decision, whereas the new method also dissuaded the honey bees from selecting the wrong option, further reinforcing the training.

In addition to the mathematical skill demonstrated in this experiment, honey bees have a wide range of abilities. They are known for their methods of communication with one another, through chemicals, odours, and a dance “language”, all of which can direct other bees to a particular location. They defend each other and their hives through the use of stingers, warning pheromones, and even heat – through the muscle vibrations of worker bees – when attacked by hornets or intruding queens.

Recent studies indicate that they can recognise human faces and that they can learn simple tasks by copying the behaviour of other bees. All of this suggests that, despite their relatively tiny brains, honey bees could be surprisingly intelligent.

BOZEMAN, Mont. — Though colony collapse disorder has generated a great deal of concern, the phenomenon has had “very small effects” on commercial pollinators, according to an author of a new study on the economic impacts of colony collapse disorder, or CCD, among commercial honey bees.
The research found “remarkably little to suggest dramatic and widespread economic effects from CCD,” according to the report.

“When we started this project, we expected to find huge effects, but we found very small ones,” said Randy Rucker, a professor in Montana State University’s Department of Agricultural Economics and Economic. “The only effects we found on consumers, for example, is that they probably pay about 10 cents more for a $7, 1-pound can of almonds at the grocery store.”

“Almond pollination fees did go up substantially, but they went up before CCD hit,” Rucker said. “You can’t attribute those increases to colony collapse disorder.”

Overall, few of the changes in commercial pollinator markets can be linked directly to CCD or other recent pollinator health concerns, he said.

The negative effects of CCD have been minimized because “beekeepers are savvy,” Rucker said. “Our research provides reason for optimism about the future ability of commercial beekeepers to adapt to environmental or biological shocks to their operations and to pollination markets.”

The report sought to identify trends in four areas: the number of commercial honeybee colonies nationwide, honey production, prices of queens and packaged bees, and pollination fees charged by commercial beekeepers to growers.

The report’s conclusions include:
• Prices of queens and packaged bees “have not increased dramatically.”
• Though there were “pre-existing downward trends” in both colony numbers and honey production before the onset of CCD, the rate of decline has not increased. In fact, colony numbers in 2018 were higher than they had been over the last 20 years.

But the report doesn’t address non-managed pollinators, data on which is scarce, Rucker said.

He also said there are many unknowns about CCD.

“There is definitely much more work to be done to grasp the effects of CCD and other threats to bee health,” he said.

The report was published in the Journal of the Association of Environmental and Resource Economists. More information: https://www.journals.uchicago.edu/doi/full/10.1086/704360.

In 2018, U.S. honey production rose 2% to 152 million pounds and the number of colonies rose 4% to 2.8 million, according to the U.S. Department of Agriculture.