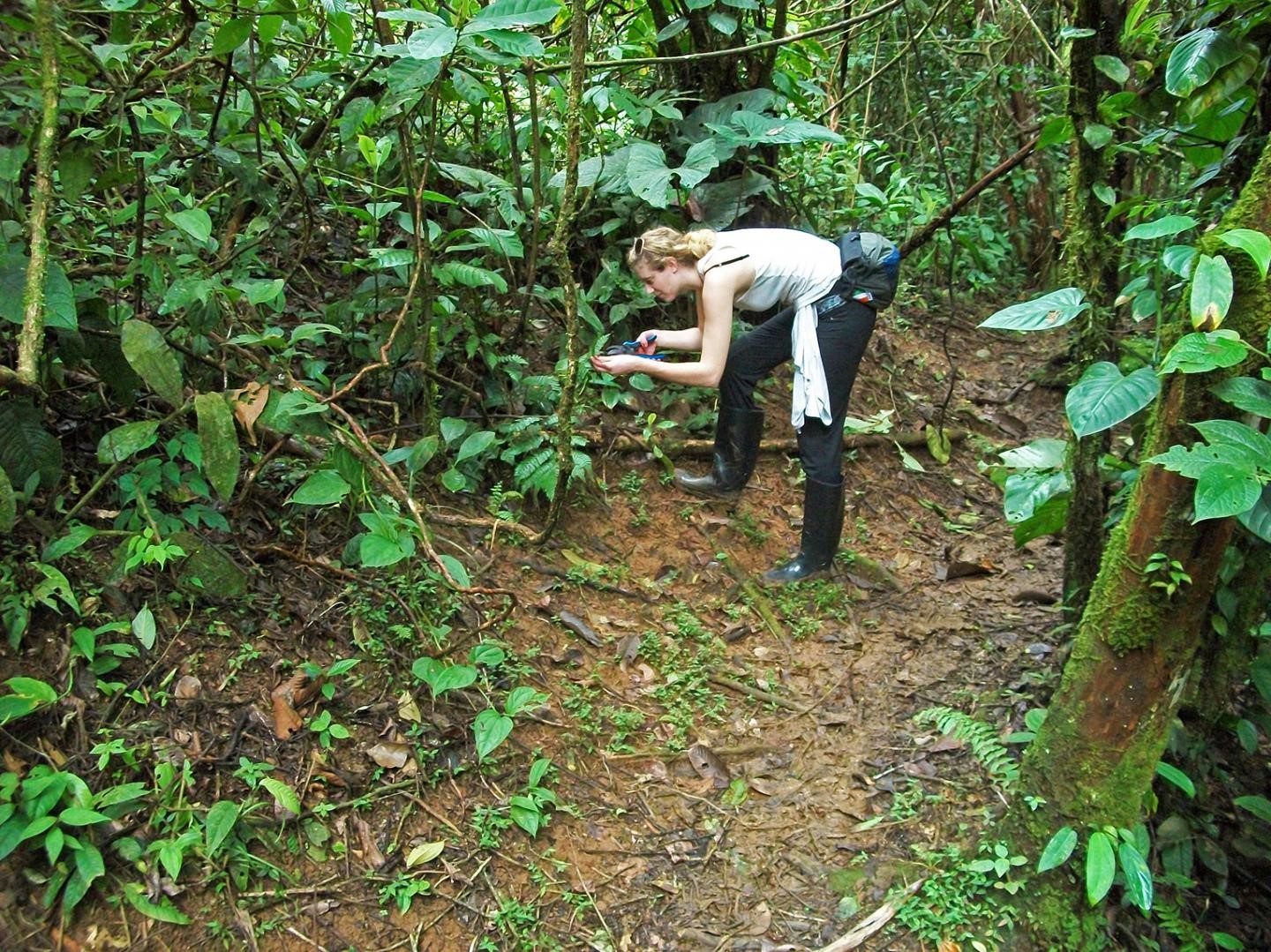 Image: Michigan State University Post-Doctoral Scholar Andrea Glassmire, an Entomologist, checks out the leaves of the Tropical Shrub Piper Kelleyi, Nicknamed “Pink Belly ” because of the color of its young.

Michigan State University scholar Andrea Glassmire and her colleagues have revealed how the mixture of chemical weapons deployed by plants keeps marauding insects off base better than a one-note defense. This insight goes beyond the ecological convention of studying a single chemical compound a plant is packing and offers new ways to approach agricultural pest management. The research was published in today’s Ecology Letters.

Glassmire, a post-doctoral scholar in MSU’s Department of Entomology and colleagues from the University of Nevada, Reno, found important relationships between plant defensive chemistry in the neotropical shrub, Piper kelleyi, and its associated insect pests.
Since plants cannot move, they defend against pests that eat them using a bouquet of chemical compounds. Ecology, however, has been biased towards studying effects of single compounds even though a feeding insect would encounter a blend of plant compounds. It turns out that the type of defense bouquet matters, whether bouquets have the same compounds or a blend of different compounds.

“If we can figure out the specific type of defense bouquet that is most effective at reducing insect feeding, then we can extrapolate these findings to agricultural systems to cut down on pesticide use,” said Glassmire.

Glassmire and colleagues manipulated plant chemical defenses in the Andes Mountains of Ecuador using a field experiment where plants were hung at different heights in the forest understory, exposing them to a range of light levels.

Their results suggest P. kelleyi plants consisting of defense bouquets having more kinds of defensive chemicals were more effective at reducing insect damage compared to defense bouquets having one kind of defensive chemical. The composition of defensive chemicals was dependent on the amount of light available. Subtle differences in light in the shaded forest understory induced changes in the defense bouquet. Remarkably, lower amounts of light increased the defense effectiveness of plants compared to higher amounts of light. Consequently, insect damage was reduced by up to 37% when P. kelleyi plants had bouquets of a blend of different compounds. Insects had difficulty consuming plants with different compound blends compared to plants with similar compound blends.

Understanding how plants’ chemical defenses vary across the geographic landscape could have important implications for agriculture. Glassmire and colleagues’ results suggest that feeding insects have difficulty adjusting to neighboring plants that are chemically different and that reduces damage. Agricultural systems comprised of a single crop monoculture lack differences in their defense bouquet because they are all the same.

“I’m excited to see how future applications of this knowledge could help farmers,” said Glassmire. “In the Wetzel lab, we are using a model crop system created by breeding commercial tomatoes with wild tomatoes to manipulate plant defense bouquets. This work will lead to new means of agricultural pest management in the future.”

The paper was co-authored by Casey Philbin, Lora Richards, Christopher Jeffrey and Lee Dyer of the University of Nevada, Reno, along with MSU’s Joshua Snook. The work was funded by the National Science Foundation, Earthwatch Institute, and a generous donation by the Hitchcock Fund for Chemical Ecology Research.