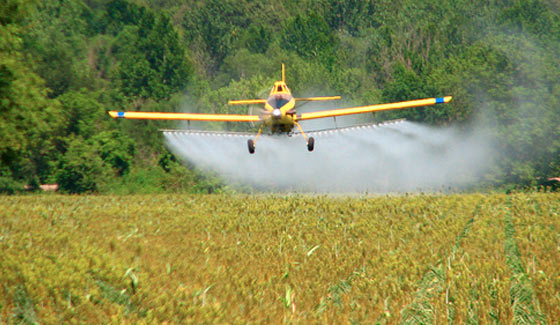 Dicamba herbicide drift onto plants growing adjacent to farm fields causes significant delays in flowering, as well as reduced flowering, of those plants, and results in decreased visitation by honey bees, according to researchers at Penn State and the Pennsylvania Association for Sustainable Agriculture.

“Because of the challenge of glyphosate-resistant weeds, new types of transgenic crops that are resistant to synthetic-auxin herbicides including dicamba and 2,4-D will be widely planted in coming growing seasons, raising concerns about damage from these drift-prone herbicides,” said John Tooker, associate professor of entomology, Penn State. “The expected high rate of adoption of the new transgenic crops will increase dicamba and 2,4-D use by four to eight times. Our results suggest that widespread non-target damage from these herbicides may adversely affect pollinator communities.”

The team examined the crop species alfalfa (Medicago sativa), which requires insect pollination to produce seeds, and the native plant species common boneset (Eupatorium perfoliatum), which is highly attractive to a wide range of pollinator species. The researchers applied a range of sub-lethal doses of dicamba to the plants, then tracked flowering and floral visitation by insect species. They identified the types of insects visiting the flowers and analyzed pollen quality to determine if herbicide exposure altered pollen quality.

The scientists found that exposure to drift-level doses of herbicide reduced flowering in both plant species. In addition, herbicide-damaged common boneset experienced significantly reduced visitation by insect species, including honeybees (pollinators) and syrphid flies (natural enemies). The results appear in the November 24 online issue of Environmental Toxicology, and will be published in the January 2016 print issue.

According to David Mortensen, professor of weed and applied plant ecology, Penn State, synthetic-auxin herbicides are usually used early in the growing season, but with the new transgenic crop varieties coming on the market, these herbicides will be used later when temperatures are warmer and more plant species are leafed out.

“This will lead to higher levels of non-target damage to susceptible crop plants and native, wild vegetation,” he said. “For susceptible crop varieties, this sort of damage could reduce yield. For non-crop plant species, this drift-induced damage could significantly decrease the pollinator and natural enemy communities that these plants can support.”

The team currently is working to determine the proportion of non-crop habitat in the corn/soybean belt that could be degraded for pollinator communities by drift of dicamba and/or 2,4-D.

“This is particularly relevant because the great majority of floristic diversity in agro-ecosystems resides in small fragments of semi-natural habitat around arable fields,” said Mortensen. “And the quality of these fragments may be substantially degraded by repeat exposure of dicamba or 2,4-D drift.”