No, Not Those Drones, These Drones 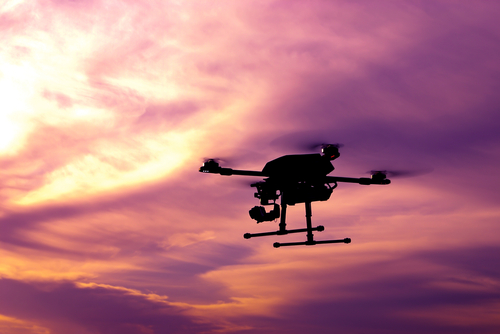 Two drones hover above a parking lot. The larger drone suddenly shoots a white net at the smaller drone, ensnaring it. The captive drone drops to the ground, but is quickly hauled upwards by a tether attached to the captor drone.

There’s been a myriad of suggestions for disabling drones. Lasers and radio frequency inhibition are among the drone-dismantling techniques R&D Magazine has written about.

Prof. Mo Rastgaar, who teaches mechanical engineering at Michigan Technological Univ., is taking a different approach: one that pits drones against one another.

According to the university, Rastgaar first conceived his idea after hearing about snipers protecting the crowds during the World Cup. “I thought, ‘If the threat is a drone, you really don’t want to shoot it down—it might contain explosives and blow up. What you want to do is catch it and get it out of there,” Rastgaar said.

The system—comprised of a launcher that shoots a big net, which is attached to the drone—can be controlled autonomously, or by a human-pilot, or a combination of the two methods.

The net can be fired at distances up to 40 ft.

After being caught in the captor drone’s net, the captive drone can be flown to a safe and secure area. “It’s like robotic falconry,” said Rastgaar.

Rastgaar and research engineer Evandro Ficanha have filed for a patent for their system. They believe the system is applicable for capturing spy and smuggling drones.

In November, the U.S. Dept. of Justice announced that it is seeking solutions to stop the smuggling of contraband into prisons via drones.

But the system, according to the researchers, could also be used to capture drones unregistered with the Federal Aviation Administration, in light of the new registration requirements.