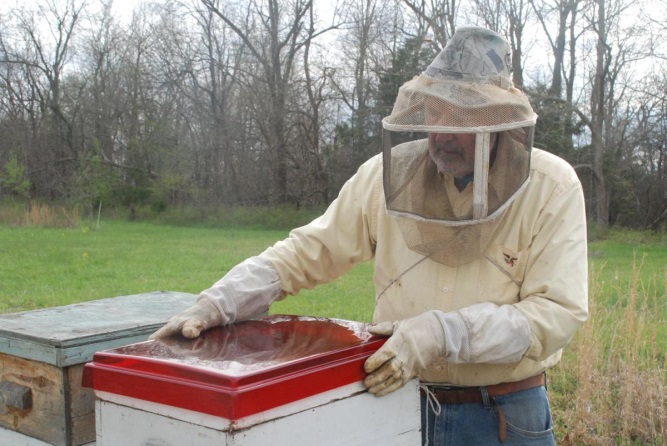 At their worst, honey bees are known for delivering painful stings, ripping apart their own tiny bodies in the process, just to protect their own hive. At their best, however, honey bees are much more impressive — not to mention, way less gruesome.

According to the Animal and Plant Health Inspection Service of the United States Department of Agriculture, honey bees’ pollination is responsible for over $15 billion in added crop value, particularly for specialty crops such as nuts, berries, fruits and vegetables.

With 2.5 million colonies in the United States, nearly every American citizen should be thankful for honey bees and their keepers.

“Growers depend increasingly on beekeepers from other states to transport honey bee colonies across the county to meet the pollination demand (a practice known as migratory beekeeping),” the USDA’s website reads.

But human behavior also puts the insects in danger.

According to the website for the Natural Resources Defense Council, pesticides, the loss of habitat and climate change are all factors that have contributed to the loss of honey bees. Some disease has, too. Pathogens carried by mites, often known as varroa destructors are known to weaken bees.

Locally, a pest known as the small hive beetle affects bees in many parts of the country. Two area businessmen, however, are working to change that.

“For about 22 years, we’ve had a problem with small hive beetles,” Superior Hive Solutions’ Michael Richardson tells a group of roughly 50 people. He’s speaking at a networking event at the Springfield Art Museum, known as 1 Million Cups. “They eat the bees.”

Richardson tells the audience the beetles were first found in 1996 in Charleston, South Carolina, where they were most likely imported on a loaded fruit from South Africa.

He moves on to explain his company’s idea: a transparent, red piece of acrylic shaped like a lid. It fits over a honey bee box hive, known professionally as a Langstroth hive, which almost looks like a small set of drawers. As sunlight shines through the acrylic, it creates red light inside the hive that disturbs small hive beetles and deters them away. He calls the product the Beetle Banisher.

After using a white light to build and repair honey bee hives at night, the partners went home covered in stings.

“The bees don’t like white lights, so they got really angry and we got stung a lot through our suits,” Bennett says. “We were wondering if we even wanted to be messing with bees from then on.”

Later, Bennett and Richardson learned through another beekeeping friend that while white light is troublesome to bees, red light doesn’t bother them.

“We did some research and found bees see red as black, so we got some lights and went out at night and started working on the hives, and we didn’t get stung,” Bennett said. “They just didn’t care.”

The discovery led them back to the small hive beetle — a pest they were growing tired of dealing with, Bennett says. They wanted to test whether the parasite had an aversion the red light.

“Sure enough, they couldn’t stand it,” Bennett said. “So, we decided to make a top.”

Once prototypes for Bennett and Richardson’s product came in, several were sent to beekeepers in Florida, where small hive beetles are a year-round concern.

“I must admit I was skeptical at first as everyone seems to have the absolute answer with their theories and gimmicks,” one testimonial on the Beetle Banisher’s website reads. “Bottom line … I’m impressed. I think this is really a step in the right direction for a minimally-invasive, chemical-free process for reducing or eliminating small hive beetle presence in the hive.”

One prototype went to Raleigh, too.

“I put the lid on a hive and I left it there for six days,” John said. “I went back and looked at the hive and in the top box, there were no beetles. The second box had a few, in the third box there was a few—you get less light as you go through there—but I put it back on four more days, and I came back and looked, and basically, they were gone.”

All in the numbers

Of course, there are similar tools in the beekeeping world that protect bees from the pests, but Richardson and Bennett say they have yet to find a product that works as well.

“Beetle Banishers are the safest, easiest, most effective way to eliminate the threat (of) Small Hive Beetles,” the product’s description reads on its website.

The product is currently available for order online, but Richardson says the pricing is hefty.

“They’re expensive, because I’m having to have them made in the United States,” Richardson says, noting the price at $65.

They soon hope to find commercial beekeepers interested in placing a significant order, so the company can work with China, where Beetle Banishers can be manufactured for a cheaper price.

All in all, however, the pair just want to protect as many bees from beetles as possible.

“It started south and two years ago, there was the first real infestation here,” Raleigh says. “And then last year, was just about as bad, if not worse.”

Richardson says the truth lies in the numbers.

“From spring of 2016, they claimed there were 2.6 million bee hives in the United States at that time,” he says, quoting a U.S. Department of Agriculture statistic. “For their same count in Spring 2017, they recorded it down to 2.5 million. They lost 100,000.”

He says the beetles are just as responsible for killing bees as any other factor. The three want people to know the seriousness of the situation.