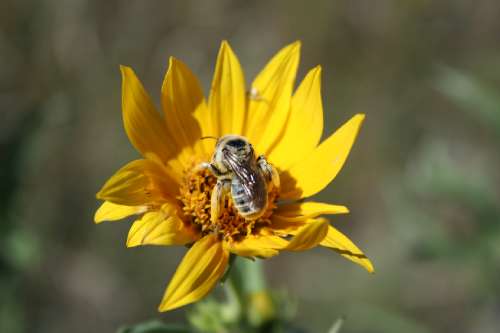 According to the first-ever study of pesticide residues on field-caught bees, native bees are exposed to neonicotinoid insecticides and other pesticides. This report was conducted by the U.S. Geological Survey and published in the journal Science of the Total Environment.

This research focused on native bees, because there is limited information on their exposure to pesticides. In fact, little is known about how toxic these pesticides are to native bee species at the levels detected in the environment. This study did not look at pesticide exposure to honey bees.

“We found that the presence and proximity of nearby agricultural fields was an important factor resulting in the exposure of native bees to pesticides,” said USGS scientist Michelle Hladik, the report’s lead author. “Pesticides were detected in the bees caught in grasslands with no known direct pesticide applications.”

Although conservation efforts have been shown by other investigators to benefit pollinators, this study raises questions about the potential for unintended pesticide exposures where various land uses overlap or are in proximity to one another.

The research consisted of collecting native bees from cultivated agricultural fields and grasslands in northeastern Colorado, then processing the composite bee samples to test for 122 different pesticides, as well as 14 chemicals formed by the breakdown of pesticides. Scientists tested for the presence of pesticides both in and on the bees.

The most common pesticide detected was the neonicotinoid insecticide thiamethoxam, which was found in 46 percent of the composite bee samples. Thiamethoxam is used as a seed coating on a variety of different crops. Pesticides were not found in all bee samples, with 15 of the 54 total samples testing negative for the 122 chemicals examined.

Although this study did not investigate the effects of pesticide exposures to native bees, previous toxicological studies have shown that the chemicals do not have to kill the bees to have an adverse effect at the levels of exposure documented here. For example, neonicotinoids can cause a reduction in population densities and reproductive success, and impair the bees’ ability to forage.  Follow-up research is now being designed to further investigate adverse effects at these exposure levels.

There are about 4,000 native species of bees in the United States. They pollinate native plants like cherries, blueberries and cranberries, and were here long before European honeybees were brought to the country by settlers.  In addition, many native bees are quite efficient crop pollinators, a role that may become more crucially important if honey bees continue to decline.

This paper is a preliminary, field-based reconnaissance study that provides critical information necessary to design more focused research on exposure, uptake and accumulation of pesticides relative to land-use, agricultural practices and pollinator conservation efforts on the landscape. Another USGS study published in August discovered neonicotinoids in in a little more than half of both urban and agricultural streams sampled across the United States and Puerto Rico.

“This foundational study is needed to prioritize and design new environmental exposure experiments on the potential for adverse impacts to terrestrial organisms,” said Mike Focazio, program coordinator for the USGS Toxic Substances Hydrology Program. “This and other USGS research is helping support the overall goals of the White House Strategy to Promote the Health of Honey Bees and Other Pollinators by helping us understand whether these pesticides, particularly at low levels, pose a risk for pollinators.”

More information can be found on this paper here. USGS research on the occurrence, transport and fate of pesticides can be found with the USGS Toxic Substance Hydrology Program webpage or the USGS Pesticide Fate Research project in California. Stay up to date with USGS Environmental Health science by signing up for our GeoHealth Newsletter.