WSUV to replace lawn with wildflower meadow to promote pollinators 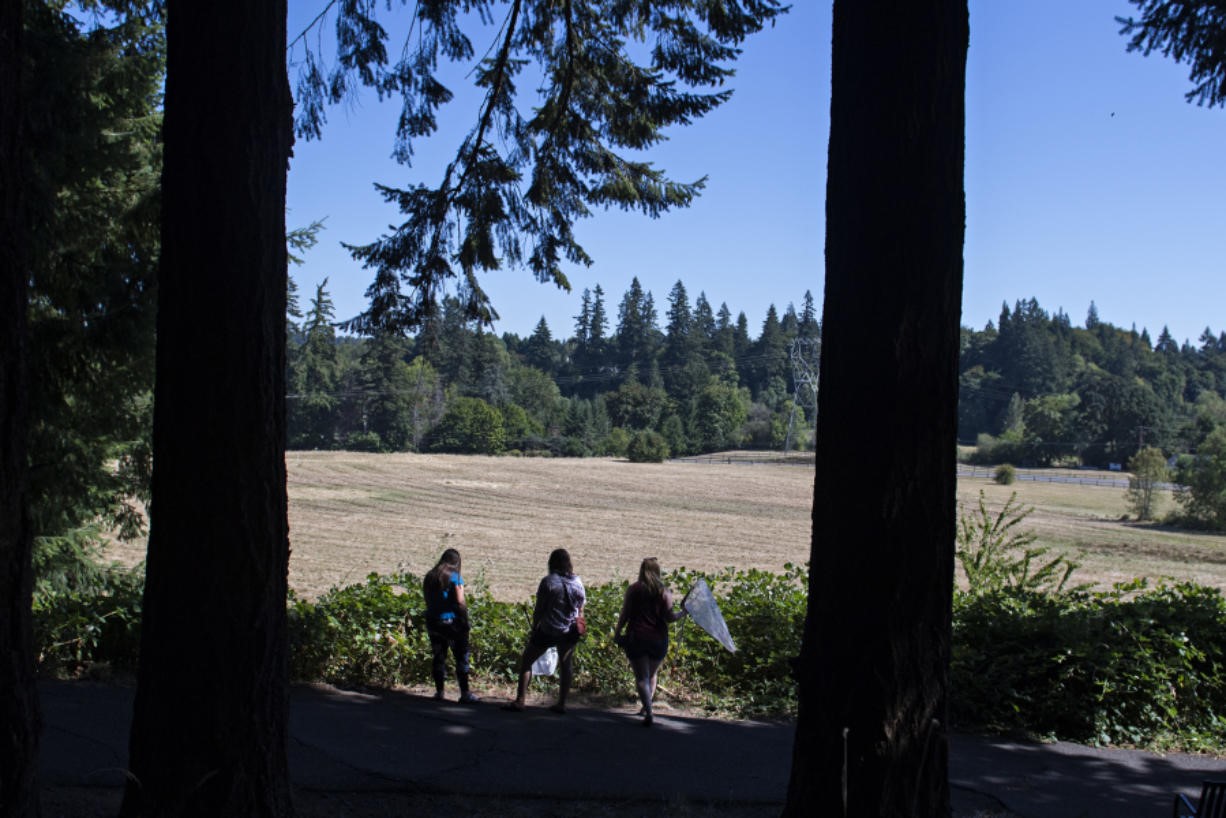 People are few and far between on the Washington State University Vancouver campus these days, but a trio of graduate biology students intend to start filling the landscape with native wildflowers and the pollinators that love them. Their goal is to achieve the Bee Campus USA designation for WSUV’s 351-acre spread from the Xerces Society, a Portland-based nonprofit organization that promotes pollinator health and certifies both college campuses and cities as officially bee-friendly.

And why not be friendly? Bees provide the free labor that generates about one-third of all the world’s food crops, including many fruits, vegetables, nuts and even coffee. The global crop production generated by bees is valued at $577 billion. Many animals other than humans depend on bee activity to produce the foods they need to survive.

If you’ve been paying any attention to ecology news in recent years, you know that pollution and habitat disappearance are killing bees off quickly, all over the world.

People are just waking up to that serious threat and to the importance of pollinators for our food system, Rebekah Gaxiola said.

“What the public figures out is usually 10 to 15 years behind what’s really going on,” said Gaxiola, whose doctoral research focuses on how nitrogen pollution affects pollinators in the Columbia River Gorge.

The WSUV campus is pretty clean and careful when it comes to herbicide applications, Gaxiola said, but there’s still one huge, underlying, green dilemma there: hundreds of acres of grass turf.

“An ecologist has to wonder, why is this even here?” Kelsey King said about WSUV’s vast stretches of lawn. A lawn is a profoundly artificial, unsustainably uniform type of landscape that’s not good for much beyond pretty pictures, said King, whose doctoral research focuses on the effects of climate change on endangered butterflies.

“Lawns are ecological deserts,” said doctoral candidate Samantha Bussan, who studies how butterflies are affected by cattle grazing. “They take so much work to maintain. They don’t let water penetrate. They’re really bad for the soil. They’re antithetical to seeing nature flourish.”

Lawns first became popular status symbols in the 1700s in England, as nobles and aristocrats enjoyed maintaining conspicuous expanses of natural green carpet. They were the only ones who could afford to keep private land uniform and unproductive, King said. Modern American lawns are made of those invasive European grasses, she added.

“The whole idea of a tame green lawn, it’s a very classist British idea,” she said.
On the first week of classes, Gaxiola, Bussan and King strolled down a paved campus path and took in an overall view of the low-lying field of grass along Northeast Salmon Creek Avenue that they intend to transform into a rich wildflower habitat that’s perfect for pollinators.

Along the way they deployed insect nets and glass vials to trap, examine and release bees, wasps and butterflies, all the while trading tales of stings avoided and stings endured in the cause of science.

The real work on their Bee Campus project begins in spring 2021 with a detailed inventory of exactly what species of plants and pollinators are already in that meadow. The trio intends to enlist undergraduate students to help with that process and gain some real-world field experience. Local naturalist groups and interested community members can join in, too.

Then, in the heat of summer, the group will work with campus facilities and landscaping managers to till the soil and remove all the noxious weeds. That will take grunt work, careful use of pesticides, as well as “solarization,” which means spreading dark tarps on the ground to trap solar energy and “cook” weeds and seeds in the soil.

After that, the group will work to plant native, locally sourced seeds and grasses throughout the zone in question, which will be about half of that field along Northeast Salmon Creek Avenue. (The other half, closest to the road, will probably end up covered by a new building as the campus continues to grow, King said.) Oregon sunshine, yarrow, tufted hairgrass, slender cinquefoil and lupine are among the species the trio have in mind.

Meanwhile, the campus is already trying to encourage native white oak trees, which were common throughout this region before white settlers moved in, to drop seeds and spread across this zone too.

It’s an ambitious plan that may take years of careful management to thrive and start looking beautiful, King said. In the meantime, the view from the street may stay pretty raw for a while. The project has gotten buy-in from campus facilities director Phil Oaks, who has joined a new Bee Campus committee. He plans to tweak mowing schedules so they’re optimal for the project — which means postponing, and being selective, about exactly when and where mowing happens.

“Mowing should be done once the plants you want to reproduce have finished flowering and seeding,” King wrote in an email. “Our plans are to continue annual mowing in the late summer or fall because this actually helps mimic some of the natural disturbance that grasslands thrive on.”