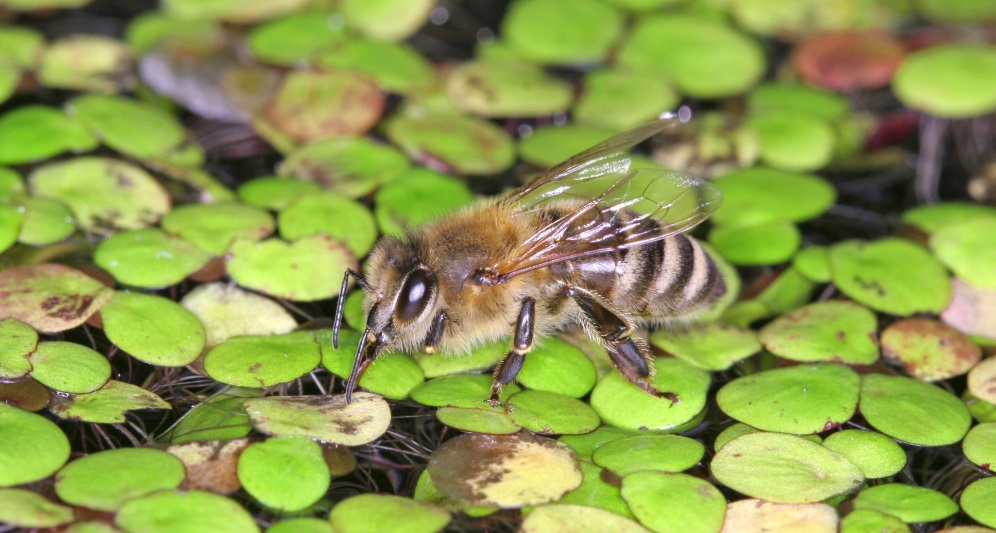 SUPER GULP When a honeybee colony gets too hot, specialist drinker bees fly off to collect water (one shown tanking up at a pond dotted with duckweed plants). Helga R. Heilmann

When a honey bee colony gets hot and bothered, the crisis sets tongues wagging. Middle-aged bees stick their tongues into the mouths of their elders, launching these special drinker bees to go collect water. That’s just one detail uncovered during a new study of how a colony superorganism cools in hot weather.

Using light bulbs to make heat waves in beehives, researchers have traced how honeybees communicate about collecting water and work together in deploying it as air-conditioning.    The tests show just how important water is for protecting a colony from overheating, Thomas Seeley of Cornell University and his colleagues report online July 20 in the Journal of Experimental Biology.

Water collection is an aspect of bee biology that we know little about, says insect physiologist Sue Nicolson of the University of Pretoria in South Africa. Collecting pollen and nectar have gotten more attention, perhaps because honey bees store them. Water mostly gets picked up as needed.

Bees often get as much water as they need in the nectar they sip. But they do need extra water at times, such as during overheating in the center of the nest where eggs and young are coddled. When researchers artificially heated that zone in two colonies confined in a greenhouse, worker bees fought back. They used their wings to fan hot air out of the hive. “You can put your hand in the opening of a hive on a hot day and feel the blast of air that’s being pushed out,” Seeley says. Several hundred bees also moved out of the nest to cluster in a beardlike mass nearby. Their evacuation reduces body heat within the nest and opens up passageways for greater airflow, he says.

The bees also had a Plan C — evaporative cooling. Middle-aged bees inside a hive walked toward the nest entrance to where a small number of elderly bees, less than 1 percent of the colony, hang out and wait until water is needed. Heat by itself doesn’t activate these bees, especially since they’re not in the overheating core. Seeley now proposes that the burst of middle-aged bees’ repeated begging for water by tongue extension eventually sends the water-collecting bees into action. They return carrying some 80 percent of their weight in water. “The water carrier comes in looking really fat, and the water receivers start out looking very skinny,” Seeley says. “Over a minute when the transfer takes place, their forms reverse.” Then the receiving bees go to the hot zone, regurgitate their load of water and use their tongues to spread it over the fevered surfaces.

In a water-deprivation experiment, bees prevented from gathering water could not prevent temperatures from rising dangerously, up to 44° Celsius, in their hive. When researchers permitted water-collector squadrons to tank up again, colonies could control temperatures. Even for multitalented bees, water is necessary for cooling, the researchers conclude.

After a severe heat stress, the researchers noticed some bees with plumped-up abdomens hanging inside the colony. “Sometime they would be lined up like bottles of beer in the refrigerator,” Seeley says. Bottled beverages is what they were, he argues, storing water and remaining available if the coming night proved as water-stressed as the day.

“Honeybees continue to amaze,” says Dennis vanEngelsdorp of the University of Maryland in College Park, who studies bee health. “Even after centuries of study, we have something new.”