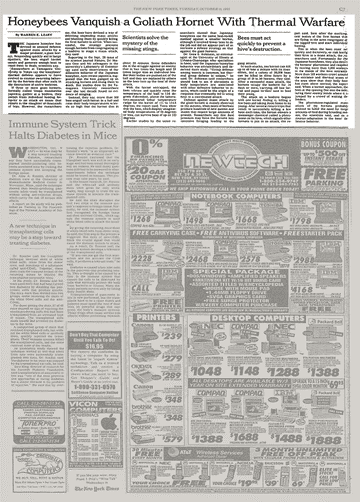 About the Archive
This is a digitized version of an article from The Times’s print archive, before the start of online publication in 1996. To preserve these articles as they originally appeared, The Times does not alter, edit or update them.
Occasionally the digitization process introduces transcription errors or other problems; we are continuing to work to improve these archived versions.

The Japanese honeybee has devised an unusual defense against mass attacks by a major predator, a giant hornet. Responding quickly and in large numbers, the bees engulf hornet scouts and generate enough heat to roast them to death, scientists say.

Researchers at Tamagawa University in Tokyo say the honeybees’ thermal defense appears to have evolved to counter swarming behavior by the hornets that often ends in the destruction of entire beehives.
If three or more giant hornets, formally called Vespa mandarinia japonica, gather at a beehive, they switch from individual hunting behavior to an attack en masse that results in the slaughter of thousands of bees. However, the researchers say, the bees have devised a way of detecting impending mass attacks and blunting them by quickly killing the first hornets to arrive. When successful, the strategy prevents enough hornets from congregating at a beehive to stage a mass attack, they said.

Reporting in the Sept. 28 issue of the science journal Nature, Dr. Masato Ono and his colleagues in the university’s Laboratory of Entomology said early observations of the defensive behavior of the Japanese honeybee, Apis cerana japonica, suggested that the bees ganged up on attacking hornets and stung them to death.

Instead, they say, more than 500 bees engulf each hornet in a ball and raise their body temperatures to levels so high that the hornet dies in about 20 minutes. Some defenders die in the struggle against an enemy that is four times the length and 20 times larger than an individual bee. But their bodies are pushed out of the ball and they are replaced by others as the bees turn up the heat of their attack.

With the hornet entrapped, the bees vibrate and quickly raise the temperature of the ball to 116 degrees Fahrenheit, above the laboratory-measured lethal temperature range for the hornet of 111 to 114.8 degrees, the report said. Tests show that the bees, which display unagitated body temperatures of 95 degrees or less, can survive heat of up to 122 degrees.

Earlier studies by the same researchers showed that Japanese honeybees use the same heat-to-kill method against a smaller hornet, although it involved fewer bees to do the job and did not appear part of as intricate a defense strategy as that against the giant hornets.

Dr. Gene E. Robinson, an entomologist at the University of Illinois at Urbana-Champaign who specializes in bees, said the Japanese honeybee behavior was extraordinary and deserved more study. “Group defense among insects is common, but thermal group defense is unique,” he said. Dr. Robinson said researchers should look to see if elevations in body temperature are associated with other defensive behavior in insects, which could be the origin of a response that eventually led to using heat in a coordinated attack.

Defense against mass attack by the giant hornets is mainly observed in the autumn, when nests of hornets produce hundreds of new queens and males that require large amounts of protein. Researchers say this food pressure may force the hornets into intensive foraging leading to the gang attacks.

In such attacks, one hornet can kill up to 40 bees a minute with its mandibles, and a colony of 30,000 bees can be killed in three hours by a group of 20 to 30 hornets, they said. After a successful mass attack, the hornets occupy the beehive for 10 days or more, carrying off bee larvae and pupae to their nest to feed their young.

The attack on a beehive begins with one hornet finding it, killing a few bees and taking them home to its young. After several return trips that result in successfully killing a few bees each time, the hornet smears a messenger chemical called a pheromone on the hive, which signals other hornets to join in an attack, the report said. Soon after the marking, nest mates of the first hornet that are flying in the area congregate at the tagged hive and start individual hunting.

This is when the bees must act quickly and decisively, or risk losing their hive in a mass attack, the researchers said. Fortunately for the Japanese honeybees, they also detect the hornets’ pheromone and respond by moving more than 1,000 workers to the inside of the hive entrance. More than 100 workers crawl around the entrance and thermal scans of the area show that their body heat has risen above normal, the report said. When a hornet approaches, the bees at the opening flee into the nest, luring their enemy inside where it is jumped by a crowd of waiting defenders.
The pheromone-regulated mass attack of the hornets probably evolved to fulfill the need for large amounts of food during breeding season, the scientists said, and as a counter-adaptation to the bees’ defensive behavior.

A version of this article appears in print on Oct. 10, 1995, Section C, Page 7 of the National edition with the headline: Honeybees Vanquish a Goliath Hornet with Thermal Warfare. 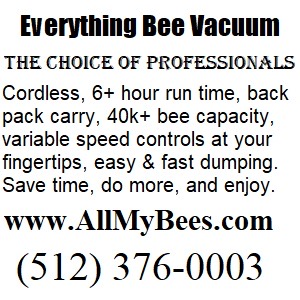