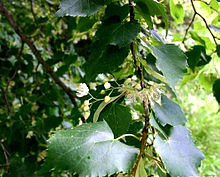 There was a Linden tree associated kill event in Reston, VA this week. Table below documents the species involved (Sam Droge did all the identifications)

Here is what is known: