Honey bees rally to their queen via ‘game of telephone’ 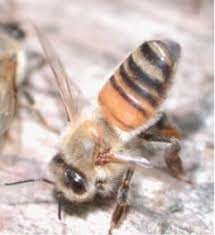 “Buzz. Buzz. The queen is that way,” said one honey bee to another. “Pass it on.”

Honey bees can’t speak, of course, but scientists have found that the insects combine teamwork and odor chemicals to relay the queen’s location to the rest of the colony, revealing an extraordinary means of long distance, mass communication.

The research is “really nice, and really careful,” says Gordon Berman, a biologist at Emory University who was not involved in the study. It shows once again, he says, that insects are capable of “exquisite and complex behaviors.”

Honey bees communicate with chemicals called pheromones, which they sense through their antennae. Like a monarch pressing a button, the queen emits pheromones to summon worker bees to fulfill her needs. But her pheromones only travel so far. Busy worker bees, however, roam around, and they, too, can call to each other by releasing a pheromone called Nasanov, through a gesticulation known as “scenting; they raise their abdomens to expose their pheromone glands and fan their wings to direct the smelly chemicals backward (seen in the video above, and close-up in the video below).

Scientists have long known individual bees scented, but just how these individual signals work together to gather tens of thousands of bees around a queen, such as when the colony leaves the hive to swarm, has remained a mystery.

In the new study, Dieu My Nguyen, a computer scientist at the University of Colorado (CU), Boulder, and colleagues focused on a colony of western honey bees (Apis mellifera L.), the most common honey bee species in the world. The researchers set up a flat, pizza box–size arena with a transparent ceiling, in which the bees could walk around, but not fly. They tucked the queen bee into a cage on one side and released the worker honey bees on the other. The scientists then recorded the insects’ movements from above with a camera; artificial intelligence software tracked bees that were releasing Nasanov pheromones.

Once the first worker honey bees located the queen, they began to assemble chains of evenly spaced bees that extended outward from the queen, with each bee wafting Nasanov to its neighbor down the line. The findings, reported this month in the Proceedings of the National Academy of Sciences, are the first direct observations of this collective communication in honey bees. Like smelly bread crumbs, the branching communication lines guided far-off honey bees back to the queen’s location—a feat no single bee could achieve alone.

“A really great analogy is the game of telephone,” says Orit Peleg, a computer scientist at CU and a senior author on the study. “You whisper a word in your neighbor’s ear, and they pass it to their neighbor, and so on.”

The researchers shed some light on how honey bees recruited one another into these scent relays. They noticed that bees in the relays spaced themselves about 6 centimeters apart. According to Peleg, this suggests the bees are detecting a certain amount of pheromones, dropping what they’re doing, and joining in to pass on their own pheromones.

Mark Carroll, an entomologist at the U.S. Department of Agriculture, cautions that the work was done in an enclosed, practically 2D space. In reality, he notes, honey bee colonies are 3D, and they often have to contend with elements like wind and rain, which make communicating more complicated.

But by simplifying the problem, he says, this research offers insights into how swarming honey bee colonies might self-organize in nature. “The next step will be to observe natural honey bee swarms and see if they’re actually doing this.”