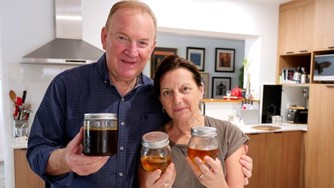 A country music honey competition could be on, with Graeme Connors not the only musician in Australia with a beekeeping hobby. (ABC Rural: Melanie Groves)

The only downside to keeping bees, according to country music star Graeme Connors, is that his wife Lyn would like him to learn a lesson about how busy they

“When Lyn sees those bees really working hard, she says: ‘Come out here and see how busy the bees are, Graeme’,” Connors said.

The couple started beekeeping completely by accident, witnessing a swarm of bees in their yard and calling a beekeeper to remove them, but deciding to let them stay after watching them move into a hive.

“They turned into our little gold-fish bowl, we were watching them every afternoon,” he said.

“I feel like I’ve got to look after them.” 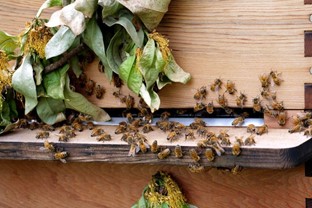 The busy bees in Graeme and Lyn Connors’ backyard moved in around three or four years ago. (ABC Rural: Melanie Groves)

The Mackay musician and his wife are not the only people in the country music scene to have an interest in the little livestock.

“Anne Kirkpatrick’s husband, Greg Arneman also, for the last 10 years every time we see each other at Tamworth he tells me about keeping bees,” Connors said.

“Now I can go toe-to-toe and say I know about the pleasures you’re getting from this.

“And Tania [Kernaghan] I know is very generous because she has a little honey jar for everyone who signs up to her page.”

The Connors have just harvested 25 litres of honey from their backyard hives, with plans to enjoy the produce with family and use it at their son’s Mackay restaurants and cafes.

“We’re accidental beekeepers, at the end of the day,” Connors said.

“And now, there’s like this secret handshake among those in the [music] industry who know.”

Despite the unconventional introduction to their newfound love, there could be potential business opportunities.

“I suppose if we have extra honey, we do hope to start bottling it and putting it in the cafes to sell,” Ms. Connors said.

“All those other budding beekeepers, maybe they want to send us their honey to sell it as well.”

Should a country-music-themed honey brand take off, Graeme and Lyn want it known they’re not biased about their own, being the best, excellent bees.

Graeme and Lyn Connors have just harvested around 25 litres of honey from their hives.

“They’re very busy, they’re quiet, they’ve all got their own GPSs, we don’t even have to encourage them to come home at night,” Ms. Connors joked.