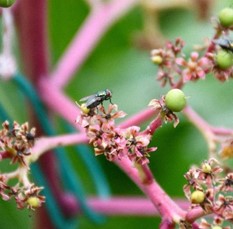 A Bee Fly, or a common green bottle fly, is seen on mango flowers in Ibusuki, Kagoshima Prefecture, in March 2021. (Mainichi)

KAGOSHIMA — An increasing number of agricultural farms in Japan are using flies instead of honeybees to pollinate vegetables and fruits, because the supply of bees is in decline and flies have proven to be good pollinators despite their negative image.

In mid-March, shiny metallic green flies were seen buzzing around pink flowers in a plastic greenhouse in the southwest Japan city of Ibusuki, Kagoshima Prefecture. Takao Arimura, a 76-year-old mango producer said that he expected them to become “the saviors of the farm.” He has been conducting an experimental cultivation of mangoes using flies for pollination for two years.

Arimura previously used only honey bees, but was not happy with poor fruit production when bees’ performance declined.( Honey Bees are poor Greenhouse pollinators because of restricted flight.) He then learned about pollinating flies, namely the “Bee Fly” launched in 2012 by Japan Maggot Co., a venture firm based in the city of Okayama established by Okayama University’s School of Medicine.

Bee Flies, named for their role as pollinators like honeybees, are a type of green bottle fly species, and found widely in Japan. The company has the flies lay eggs in sealed devices, and raises them at its facility until they become pupae before shipping. Farms that purchase the flies let them emerge from pupae inside a greenhouse in which crop plants are grown for pollination.

Japan Maggot President Takuya Sato, 60, said, “They are sanitary because we keep them in a clean environment and take thorough safety measures.”

A thousand flies are sold for 2,200 yen (about $20). So far, more than 500 farms that produce strawberries, mangoes and other crops have bought the flies.

Behind the flies being widely used for pollination is the serious shortage of honeybees. In addition to the mass mortality of bees, for which mites and agricultural chemicals have been blamed, the aging of beekeepers has led to the falling supply of the buzzing insects.

There are also advantages in using flies. Honeybees work best in a temperature range between 15 and 25 degrees Celsius, so their performance is reduced during winter, when temperatures are low, and when there is limited sunlight. As a result, there is a lack of pollination, which causes strawberry plants, for example, to bear crooked-shaped fruits. In contrast, flies work well between 10 and 35 C, making it easier for farmers to manage their crops.

Flies do not hurt flowers because of their light-weight bodies, and they do not sting workers. Their lifespan is about two weeks in a greenhouse, which is shorter than that of honeybees, making it necessary to replenish flies about once every 10 days, and they are not suitable for pollinating some crops including melons because they are picky about the smell and shape of flowers. Nevertheless, flies are about to become essential to supplement the shortage of honeybees.

To make pollinating flies more common, groups including Japan Maggot, the Nara Prefecture Agricultural Research and Development Center and Okayama University have created a user guide for growing strawberries. As there is also an issue to clear the image that flies are “unsanitary,” Api Co., the largest beekeeping firm in Japan based in the city of Gifu that also sells the Bee Fly, is aiming to promote the flies by creating a mascot character likened to “a fairy that helps crops bear fruits while honeybees are resting.”

In tropical regions like Thailand, flies apparently are contributing to pollination for various fruits including mangoes. Yuichi Yoshida, a vegetable crop science professor at Okayama University, said, “Flies for pollination are sanitary and resistant to diseases. Recently, some strawberry farms for agritourism are proactively using them. As there is no indication when the bee shortage will be eased, I hope the flies become more widely used.”