From the military to beekeeping: A look into a veteran’s unique retirement hobby 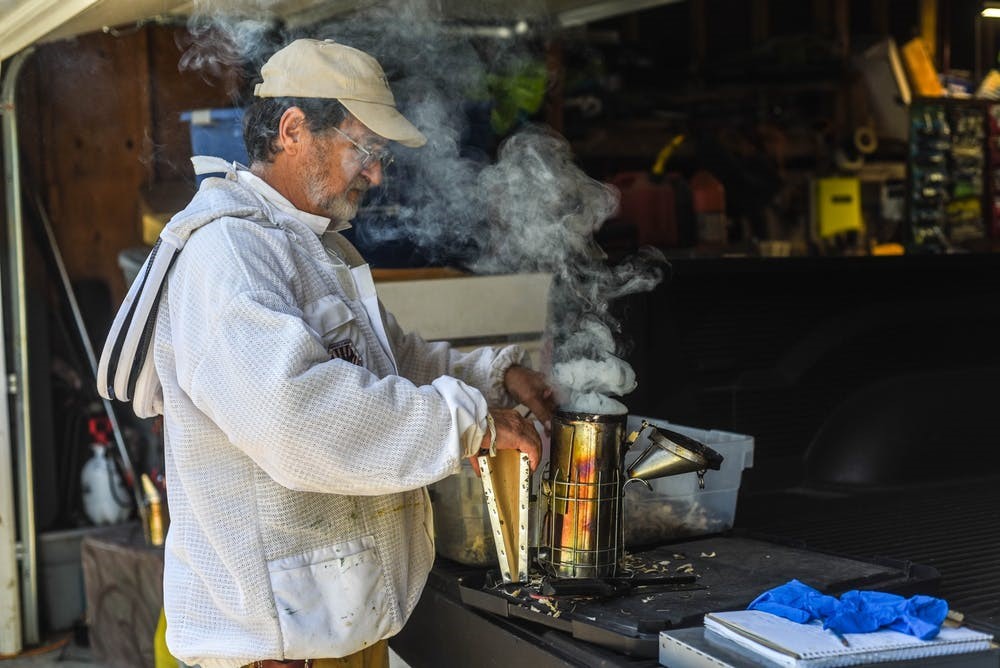 Brown is a Michigan beekeeper who trained through the program Heroes to Hives, whose goal is to set up veterans with free beekeeping knowledge and training. The nine-month program features online lectures and hands-on lessons.

Brown’s curiosity was piqued when his wife brought home honey purchased from a friend who was a beekeeper. He started off with two hives, but his farm has grown significantly since 2018.

To grow his bee yard, Brown rescues hives and pulls them from homes. Just this past week, he had three calls for his extraction and relocation services but had to turn them down as he only deals with honey bees.

Removal isn’t always an easy task, as the swarm can migrate and clump together on the ground or become aggressive.

“We had one house … big, old two-story farmhouse again,” Brown said. “And those bees have been in that guy’s house for over 10 years. And they had been, tried to get them out of that house numerous times and the bees were very, very offensive. And you walk into their driveway and they start smacking you … and they go right for your eyes.”

Overall, he’s happy with the temperament of his hives.

“They’ve always been kind of a mild-mannered bee,” Brown said. “I don’t over-smoke them. I try to keep away from having to do that to them because the more you smoke them, the more irritated they get. Well, you would too if your house is on fire.”

Brown stressed the importance of getting training before starting your first hive, as honey bees require special care and maintenance.

“And there’s a lot of stuff that beekeepers get into that they didn’t take training into or didn’t get researching it before they did it,” Brown said. “They thought ‘Oh anybody can do bees.’ They’ll buy a box of honeybees, they’ll put them in a box and think that’s all they got to do. Well, no. Bees are considered livestock. So, every one of those are considered like a cow, a sheep, a horse, whatever, but they’re livestock.”

Brown advises to be wary of the multitude of beekeeping videos on YouTube, as the validity varies by the experience of the creator.

“I’ve learned an awful lot of stuff,” Brown said. “And there’s no way you can learn it all. I mean, I’ve went through the growing pains. I’m still going through growing pains. I come across (issues) all the time.”

Brown has found his flow while doing inspections and care, but it took some practice to get there.

“When I first started doing this, it was nerve wracking in the beginning because I hadn’t done that many hive inspections. To get into my first box and do (an inspection) and understand what I’m looking at instead of panic city when you look at all these bees staring at you wondering what you’re going to do with them is you learn how to make your moves,” Brown said.

Although Brown has gained experience with inspections, he still has a slew of other potential issues to worry about. Numerous problems can pop up including diseases, mites and beetles, and figuring out ways to keep the bees alive through the winter.

“You have to find a vet that’s bee trained … So, if I ever have to have an issue taken care of, they’ll come out, they’ll get in the hive with me and we’ll check em out,” Brown said.

Brown is able to deal with Varroa mites, a parasitic mite that kills bees and causes damage to hives, by doing a hive treatment that is safe and non-toxic to humans.

It’s a team effort between Brown and his honey bees to remove hive beetles that damage the honeycomb. He initiates the removal by putting unscented Swiffer sheets into two corners of his boxes, which the beetles get stuck on.

Once Brown keeps his hive safe from invaders, he still needs to consider Michigan’s climate. To accommodate for the cold months, he picked the Saskatchewan bee, a Russian hybrid.

In addition to checking his hives for honey production and the health of the bees, Brown must look for signs of potential swarming, or over population resulting in bees leaving the hive. If this occurs, he transfers bees into a new hive.

“You’re going to end up splitting that hive because it’s just the way they are,” Brown said. “They’re going to increase and if you don’t (split the hive), they’re going to swarm. If you don’t mind watching … half your hive fly off into the sky, then don’t worry about it.”

Eventually, the hives fill up and the honey must come out for processing. 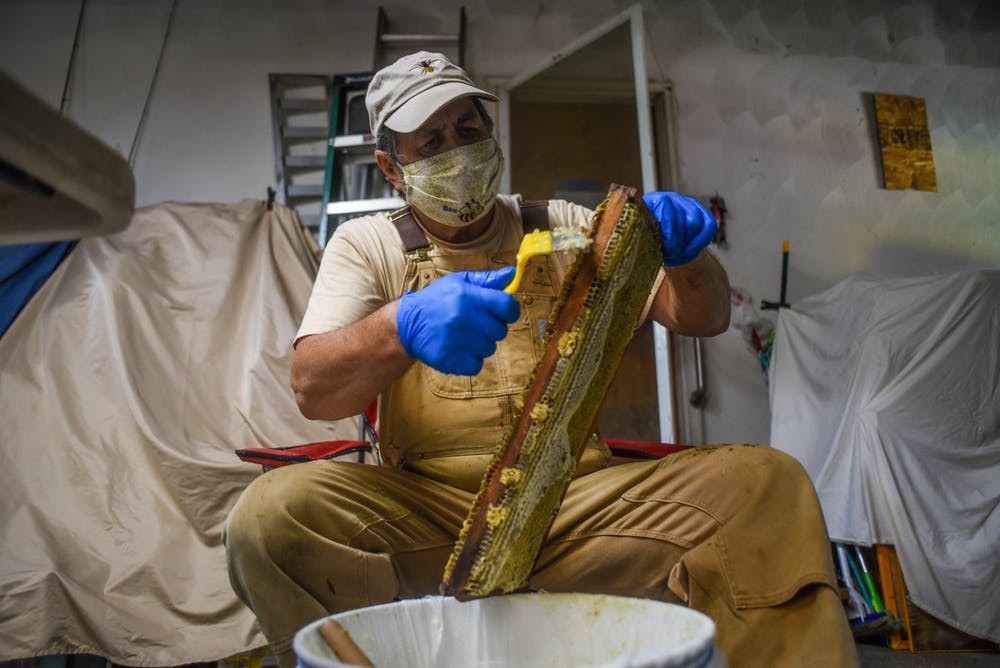 Beekeeper Gary Brown removes wax capping to reveal the honey on the frame in his garage at his home on July 31, 2020.

First, he takes the capping — a layer of wax — off of the frames revealing the honey beneath. He then places 18-20 frames into a spinner that uses centripetal force to pull the honey out. The honey then runs out into strainers that catch any remaining pieces of wax or honeycomb. Here, Brown gets to see the result of his hard work.

Though Brown loves what he does, he acknowledges the time, commitment and effort that goes into this unique hobby.

“For a guy who retired, this is not retirement,” Brown said. 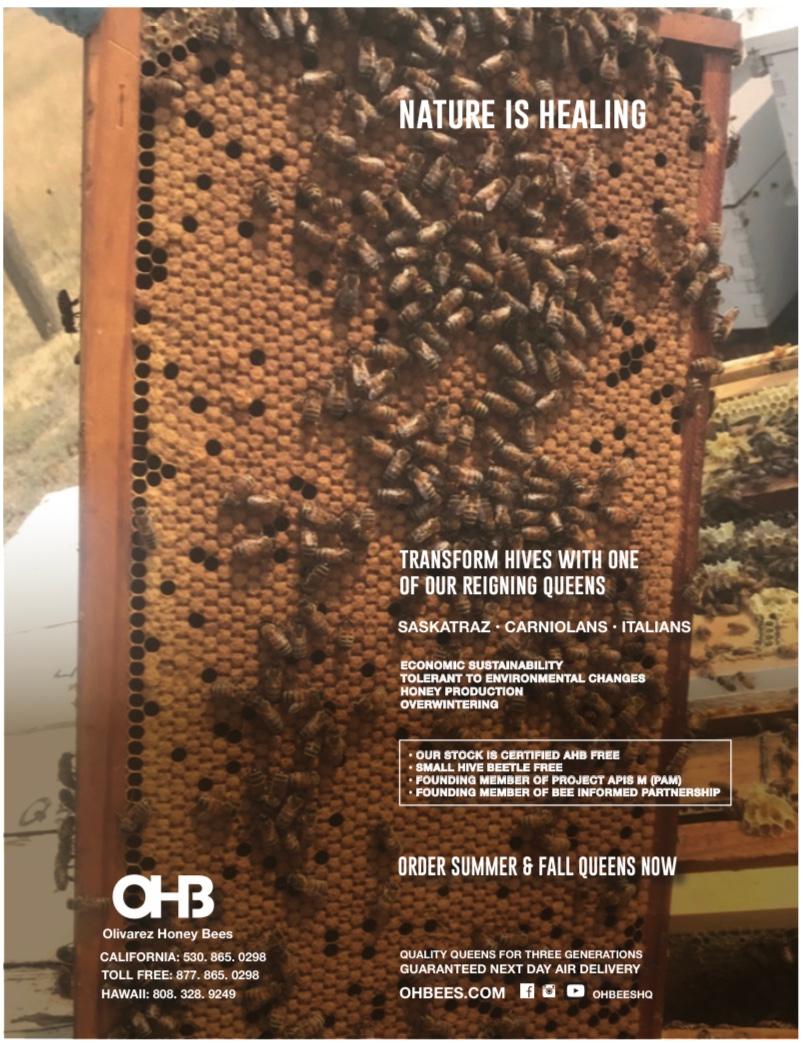