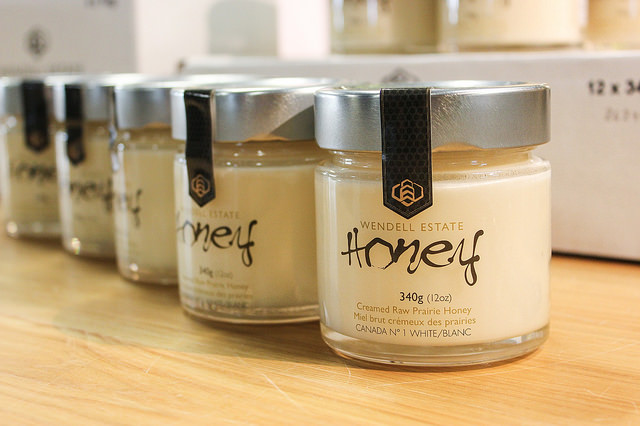 ROBLIN, Man. — The surge of counterfeit honey into global honey supplies has been devastating for Canadian beekeepers.

“It’s been twisting my hand because I can’t stay here,” said Tim Wendell of Wendell Honey.

“I don’t know if the price is coming back or how long it’s going to take. It always has come back, but is it even going to happen this time because no one seems to care.”

Wendell has been in the business a long time. He and his wife, Isabel, officially took over the hives from his father in 1974, but bees have always been part of his life.

Wendell’s father, John, was fascinated by bees and started the business in the 1930s after catching a few hives in the late 1920s.

Wendell Honey, which is based out of MacNutt, Sask., has experienced good years and struggled through times when the price of honey dropped or when a treatment was ineffective against an ever-changing mite population that caused a spike in bee mortality.

Recently, from 2010-12, the price for a pound of honey surged to more than $2 in Canada, and honey producers enjoyed healthy profits.

But the boon was short lived as fraudulent honey flowed into world honey markets.

The extra volume of “honey” on the world market quickly weighed on prices, which fell to as low as $1.10 per lb., well below the cost of production for Canadian producers.

Today bulk honey returns are showing some strength and it is possible for honey producers to reap a small profit. However, the problem of fraudulent honey persists, and how long the price will stay at this level is anyone’s guess.

“(Adulterated honey is) a worldwide problem. What it has done is it’s basically downgraded the price of Canadian honey, of basically all honeys,” said Rod Scarlett, executive director of the Canadian Honey Council.

“They will take honey and they will add corn syrup, rice syrup, or another sweetener to add more bulk. They will sell it as honey, and the corn syrup and rice syrup is very cheap. So they adulterate the product to get more product to sell at a higher price.”

It confirmed the practice of adulterating honey is common and widespread.

Canadian honey is considered among the safest in the world, largely because the industry has to follow strict rules set out by the Canadian Food Inspection Agency. However, this reality doesn’t seem to matter to American processors, which treat Canadian honey the same as honey from areas where adulteration is a known problem.

The U.S. is the world’s top consumer of honey, but there is a large price spread between what’s paid for honey produced in the U.S. and imported honey, partially because of concerns over adulterated honey.

“We receive at least a dollar less than American producers per pound, yet our biosecurity and food safety standards certainly exceed theirs, and everybody that exports to the U.S. can be examined by the USDA,” Scarlett said.

With the use of anti-dumping laws, the U.S. no longer imports honey from China, where much of the adulterated honey is suspected to originate.

However, Chinese honey still makes it into the U.S. through transshipments.

Canada produces much more honey than is consumed in the country, but imported adulterated honey has been found in Canadian stores.

“A few years ago we were able to take a product from Spain off the shelves. It was a Spanish adulterated honey,” Scarlett said.

“I know the CFIA is continuing to do testing on an ongoing basis.”

Before April 1, 2017, the CFIA tested between 64 and 100 samples of imported honey a year for the presence of foreign sugars and found three to nine samples that contained added sugar.

Starting in April 2017, the agency increased the amount of honey it tested and collected 186 samples of imported honey in 2017, 11 of which were found to be adulterated.

The CFIA uses a technique known as stable isotope ratio analysis to look for C-4 sugars (sugars from cane or corn syrups) in the honey, but these are not the only sugars being added to adulterated honey.

“The CFIA is aware of reports indicating that sugars other than cane and corn syrups were being added to honey. As a result, the CFIA is investigating the potential to use nuclear magnetic resonance spectroscopy (NMR) profiling to identify other sugars which may be used to adulterate honey (e.g. C3 sugars from rice and beets),” the agency said in an email.

In 2017 Canadian honey production was worth approximately $188 million: $79 million of this was exported, while imports of honey into the country were worth $41million.

Scarlett said the value of imported honey is largely made up of high value organic honey and manuka honey from Australia and New Zealand.

There are two major end uses of honey: pure honey sold on store shelves directly to consumers and the baking and processing market.

The adulterated honey is primarily sold in barrels to the processing market.
Packers in the U.S. seem content to purchase low-price honey regardless of where it comes from, which has Canadian producers competing with low-priced fraudulent honey for the large American packing market.

“The American packers are trying to drive the price down and are buying cheaper honeys from other countries where the honey being produced is not necessarily produced to the same degree of food safety and biosecurity as Canadian honey,” Scarlett said.

Wendell Honey is a good example of how Canadian honey producers are adapting to the times by changing their business model.

The volatility of the bulk honey price has always made Wendell uneasy because it made his business vulnerable, and there was little he could do about it.

In 2011, during the last price up-swing when there was a little extra money around, the company started to increase the amount of honey it bottled.

Wendell said the company started to develop its own brand and markets because the price it receives for packaged honey is much more stable than bulk sales, and they have more control over the packaged honey price.

When the company began to develop its own brand and market, it had to find a way to differentiate itself in a food market considered one of the world’s most fraudulent.

So the company focused on describing its honey as uniquely pure because of the processes it uses. Its website uses the slogan: “Naturally from the hive to the jar with zero processing. It’s pure Canadian honey from the prairies.”

“There is the standard dyce method of creaming honey, but we don’t use that,” he said.

“Everybody is doing that, but we don’t want to do that. We want to be different and we think we have a superior product because of it.

“The dyce method always uses other honey that gets mixed with it, and I think that takes a little bit away, although it’s still better than most of the stuff the big packers are doing out there.”

Wendell said the process they use moves the honey from the hive to jars as quickly as possible to maintain the flavour bouquet from the hive, without mixing it with other honey.

“We try not to filter our honey,” he said. “It’s really more of a straining process than a filtering process. We try to keep it as natural as we’re allowed by the regulations to still meet Canada No. 1 standards.”

Glass jars from Italy were chosen to package the honey to help showcase the product as high end.

Wendell said they focus on producing and marketing a premium product in countries, primarily in South East Asia, where it’s difficult to source safe and authentic food.

“Our biggest market to date has been China,” he said.

“I listened to some people at a conference I was at years ago who said China is a good market, they are interested in clean food because the people with money in China don’t want to buy food produced in China,” Wendell said.

He said they struggled to establish foreign markets in the beginning with some traders taking fewer packages than promised and trying to pay less than originally agreed.

“We packaged too much honey in the beginning and we ended up dumping a bunch of it because I thought it would sell better than it did,” Wendell said.

In 2013 the company made a pitch on the Dragon’s Den television show but decided not to take the deal that was offered.

However, Wendell said the exposure the company received from being on the show helped open doors that had previously been closed to it.

Eventually perseverance paid off and demand for the honey steadily increased.

In 2017 the company again doubled the amount of honey it packaged and 200 pallets were wrapped up, which sold out by the end of February.

Wendell said the demand for honey in the company’s current markets is beginning to soften, so they are looking to develop other markets, including South Korea, Taiwan and Japan.

To keep up to its changing business model, Wendell said the company continues to adjust.

Wendell Honey has brought in three long-term employees as well as Wendell’s son, Nathan, as shareholders.

Another company was formed called Wendell Estate Honey, which handles the bottling and marketing side of the business. It is managed by Tim, Isabel, their sons, Jeremy and Nathan, and Nathan’s wife, Carolyn Wendell.

During the fall the companies employ up to 55 people, who help bring in the hives and then extract and bottle the honey.

The Roblin Co-op grocery story recently moved into a new building, and Wendell Estate bought the old store and is now in the middle of renovating it.

Wendell said the facility will provide options for the business as it expands.

He said the honey industry has faced significant challenges before, such as in 1987 when beekeepers were no longer allowed to import queen bees from the U.S.

“There were a group of beekeepers from Nipawin, Sask., who were quite progressive in their thinking. They sold most Saskatchewan beekeepers on preparing your losses and your needs the season before by making small units that we call nucleus colonies,” Wendell said.

Establishing nucleus colonies created more work for beekeepers, but it helped them become more self-sufficient and productive in the long run.

“You can select for what works for you and your outfit, you can select the stock you want to breed from,” Wendell said.

He said with the challenge of counterfeit honey undermining beekeepers’ profits, and in the absence of any sign the issue will be dealt with in the near future, it may be the case that packaging and branding clean Canadian honey is the way forward for the Canadian honey industry.

Similarly to how Canadian beekeepers became more resilient through sourcing queens from their own nucleus colonies, in the long run they may be better off once their businesses are less reliant on bulk honey prices set by an adulterated world supply, he added.

Canadian honey stats
In 2017:
• There were a record 789,598 honey bee colonies in Canada.
• 10,544 Canadian beekeepers kept one or more honey bee colonies, up 19 percent from the five-year average.
• Alberta, Saskatchewan and Manitoba accounted for 68 percent of the country’s total bee colonies and for 86 percent of the total honey production.
• Alberta bees produced the most honey with 43 percent of total production, followed by Saskatchewan (24 percent) and Manitoba (19 percent).
• Ontario has the most beekeepers, with 3,331 beekeepers or 32 percent of national total. B.C. and Alberta come in second and third, with 2,640 and 1,360 beekeepers respectively.
• Canada produced 92.1 million pounds of honey in 2017, down three percent from 2016. In 2015 the value of honey produced in Canada fell from $210 million to $169 million in 2016, but prices rebounded in 2017 by 14 percent to $188 million, despite a three percent reduction in total production.