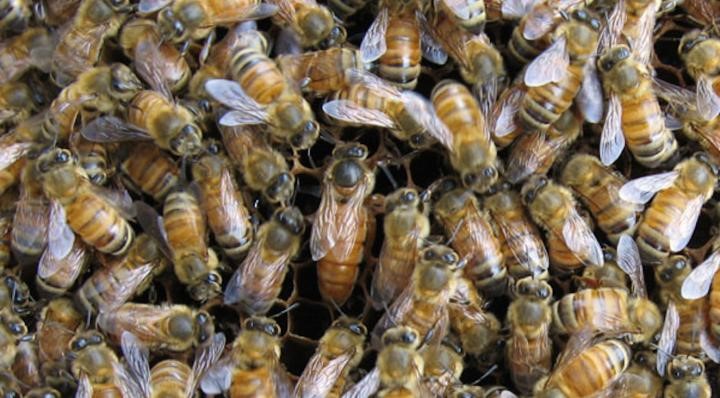 Researchers from Virginia Tech were part of a collaborative $958,415 National Science Foundation (NSF) grant to study the host-microbiome-parasite interactions in the honey bee gut, with $750,000 coming to Virginia Tech.

“Using the honey bee gut microbiome as a model to study host defense against parasites could have implications for understanding the human microbiome and host defense, as well,” said Belden, the lead investigator on the grant and professor in the Department of Biological Sciences in the College of Science at Virginia Tech.

A microbiome is a complex community of bacteria and other microbes that inhabit a specific environment; in this case, the honey bee gut.

“We know that gut microbiomes change in response to various stressors in the environment. What we don’t yet understand are the intricate interactions that happen between the host, the microbiome, and parasites,” said Haak, assistant professor of plant and microbial genomics in the School of Plant and Environmental Sciences and affiliated faculty of the

Walke, now an assistant professor at Eastern Washington University, completed her Ph.D. under Belden in 2014 and returned as a postdoctoral fellow from 2015 to 2017, when she studied the microbiomes of amphibian skin and honey bees. Her postdoctoral work led her to Fell, professor emeritus in apiculture, the practice of beekeeping, in the Department of Entomology in the College of Agriculture and Life Sciences.

“There has been a tremendous loss in the honey bee population since the 1990s that continues to afflict U.S. beekeepers and agricultural producers. Virginia beekeepers lost almost 60 percent of their colonies over the winter of 2017-2018 — the highest percentage in state history, and almost twice the national average,” said Fell, who has studied honey bees for over 40 years.

Belden, Fell, and Walke worked together on a grant to study the effect of pesticides on honey bee gut microbiomes funded by the Virginia Department of Agriculture.

Honey bees were also chosen as the model for this current grant because of their reduced gut microbiome, making it easier to test the roles of the interacting genes from the host, the microbes, and the parasites. Researchers have identified approximately 10 key components of the honey bee gut microbiome, in comparison to the thousands found in humans.
Haak will focus on sequencing the genomes of the microbes in the honey bee gut microbiome to look at the true impact of genetic variation within the microbial community and how that reflects its function. He is also working to determine which genes are actively involved in the interactions between the gut microbiome and the host using a tool called metatranscriptomics.

By starting with a simpler model, the team hopes to extrapolate the findings to advance the understanding of wildlife and human health.

“The host-microbiome-parasite interactions can be mathematically modeled as a network where, for instance, the biochemical products produced by genes from host cells directly affect the bacteria and vice versa,” said Belden, also an affiliated faculty member of the Global Change Center.

One goal of the newly funded study is to develop a network of the genes from the parasite, microbiome, and host to determine their interactions with each other and to develop an idea of the key points where they interact.

“We will develop computational tools that can compare the parasite-microbiome-host gene networks in different conditions (for example, between infected bees and normal bees or between a bee strain that is infected and another that is resistant to infection) to identify modules of genes that might be important for resistance to the parasite. These changes in interconnections might help in identifying focal nodes that can be tested experimentally in honey bees,” said Murali, professor of computer science in the College of Engineering and co-director of the ICTAS Center for Systems Biology of Engineered Tissues.

The researchers expect that this approach can then be applied to other systems.

Part of the grant funding allows for Haak, with the support of the team, to develop a biology and computer science-based outreach module for local elementary school students. Students and teachers will be guided through building Raspberry Pi clusters, a small computer to teach programming to beginners. Students will be doing microbiome analysis on their mini computers and develop computer science skills at a young age.