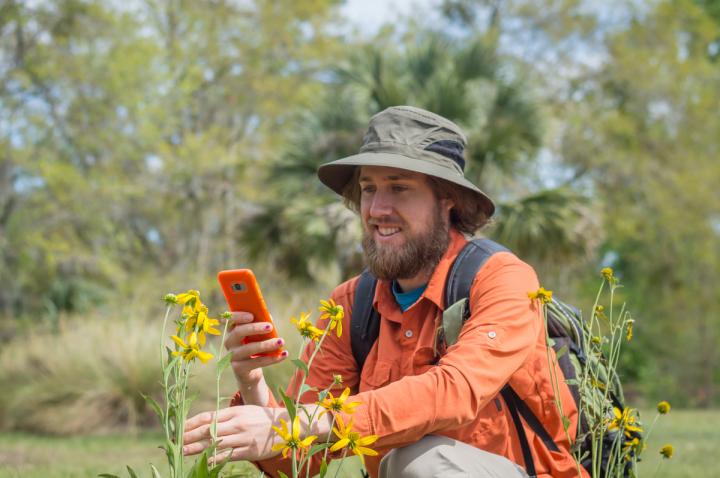 With a $338,613 grant from the foundation’s Pollinator Health Fund, UCF Biologist Barbara Sharanowski and her team will make native seeds (specific to each ecoregion in the USA) widely available. Credit: University of Central Florida.

Funded by the Foundation for Food and Agriculture Research, Barbara Sharanowski, at the University of Central Florida will coordinate a nationwide team of citizen scientists who will convert lawns into native wildflower havens especially designed to attract native bees and other insects that pollinate plants.

Bees and other pollinators are essential to food production. Some scientists estimate that one out of every three bites of food eaten exists because of pollinators like bees.

But bees have been dying off since the early 2000s. The reasons for the decline vary from disease to habitat reduction. Scientists around the world are working on reversing the trend, but one of the things everyone can do to help now is to increase the bee’s native habitat, Sharanowski said.

“Lawns provide no habitat for pollinators and occupy far more area than any one crop,” she said. “Lawns provide an opportunity for habitat restoration to help conserve pollinators. Each person, whether in an apartment or house, can make a difference by creating pollinator habitat using local, native wildflowers.”

With a $338,613 grant from the foundation’s Pollinator Health Fund, Sharanowski and her team will make native seeds (specific to each ecoregion in the USA) widely available through online distributors. Think of an Amazon for wildflowers. The team will also create an app and online tools to educate the public and volunteers about the important role bees play in food production and how to properly sow the seeds.

“Through the development of a fun mobile app, we hope to teach the general public about pollinator identification and planting native wildflowers so that these citizens can contribute to data on pollinator abundance and diversity,” she said. “By engaging a large number of people across the US, we hope to create a national movement where Americans participate in conserving and documenting native pollinators. These small steps by individuals collectively contribute to our national food security through pollinator conservation.” Individuals wanting to help beta test the project can sign up here: https://lawntowildflower.squarespace.com/

Bees are vital to food production and to the species that depend on food for their survival – including humans. According to the USDA, three-fourths of the world’s flowering plants and about 35 percent of the world’s food crops depend on animal pollinators to reproduce.

Bees eat nectar and pollen almost exclusively so they require flowers to survive. But many flowers need bees as well, they require that their pollen be transported to other flowers so they can generate fruits and seeds. By buzzing from flower to flower, bees eat and ensure flowers are fertilized and can reproduce. These mutually beneficial interactions are necessary to sustain the over 5000 bee species that live in North America, but also ensures that grocery stores around the world are stocked.

Sharanowski is an associate professor in the Department of Biology. She joined UCF in 2016. She has a doctorate from the University of Kentucky in Entomology and degrees from the University of Saskatchewan. She runs a lab focused on molecular systematics and evolution of Hymenoptera (bees, ants, and wasps). She is also the curator of UCF’s Bug Closet. http://sciences.ucf.edu/biology/bugcloset/