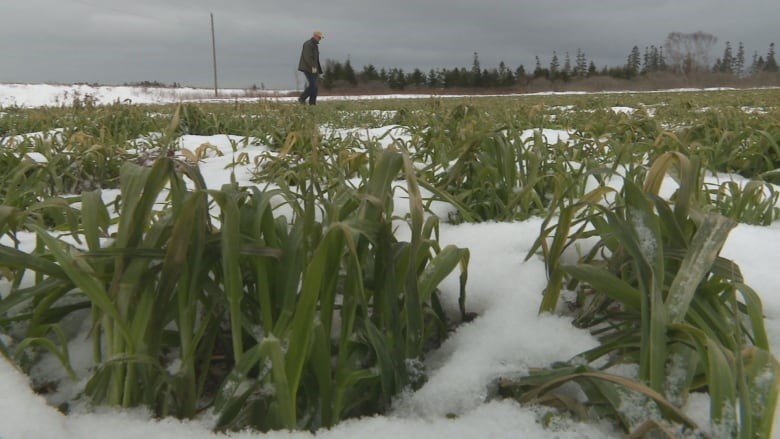 Cover crops grown in fields during winter may be warming temperatures in the northern United States and southern Canada, according to a new study by scientists at the National Center for Atmospheric Research. The crops, a land management strategy farmers use between growing seasons, create a darker surface than a snow-covered field, absorbing more heat from the Sun and producing a local warming effect.

Cover crops have several ecological benefits, such as reducing erosion and increasing soil productivity, but until now researchers have not looked at the way cover crops could be affecting winter temperatures.

“Most people look at cover crops for the localized benefits, but the fact that they might increase winter temperature means they could contribute to regional climate change,” said Danica Lombardozzi, a plant ecologist at NCAR and lead author on the paper.

Vegetation protruding above the snow will reduce the reflectivity, or albedo, of the surface. Instead of the bright snow reflecting solar heat back into space, crop stems and leaves absorb the heat and warm the atmosphere around them.

The new study, published in the journal Geophysical Research Letters, suggests that tall, leafy cover crops can warm the surface in the growing region by up to 3 degrees Celsius (nearly 5.5 degrees Fahrenheit).

“Dark cover crops absorb the Sun’s heat and then warm the atmosphere. Even crops partially covered by snow could decrease reflectivity enough to influence the winter temperature,” said Lombardozzi.

This research also suggests that wintertime warming is particularly pronounced in regions where winter snowpack is variable, such as the American Midwest. Climate change is already projected to warm North American winters in the coming decades, and the results of this study suggest that cover crops could magnify these effects.

Researchers used advanced simulations of the NCAR-based Community Earth System Model (CESM) to understand the interaction between cover crops, the land surface, and the atmosphere.

“We wanted to look at the characteristics of cover crops: are they tall or short, do they have lots of leaves or few leaves?” said Gordon Bonan, an NCAR senior scientist and co-author of the study.

To represent this range of crops, the scientists ran a series of simulations. The first simulation had tall plants, 50 centimeters (20 inches) in height, with few leaves. The second crop type was also tall but very leafy, and the third was short, 10 centimeters (4 inches) in height, and also leafy. For each of the three crop scenarios, the percentage of crop likely to completely fall over under the weight of the snowfall was set at 20 percent.

The simulations revealed that through the winter months (December through February), tall and leafy cover crops increase temperatures just above Earth’s surface by 3 degrees C (nearly 5.5 degrees F) in growing regions in the central and northern United States and southern Canada.

The study also revealed patterns of warming for the shorter and less leafy cover crops. However, the change is not as significant as for the tall, leafy crops, and the effects occur across a smaller region in the midwestern United States and western Canada.

“In general, the height tends to matter more than the leafiness, but together they have a strong impact,” said Lombardozzi. “The study’s results suggest that farmers could reap the full benefits of winter cover crops and reduce the impact on climate by planting shorter and less leafy crops.”

More research is needed to understand the costs and benefits of winter cover crops in North America, the scientists said. The next step would be to look at the total effects of these crops and model a more realistic representation of how cover crops are employed as a land management practice.

“It is essential to understand how our land management practices might affect climate,” said Lombardozzi. “If we want all of the benefits that cover crops can provide, like carbon storage and erosion control, we also need information on cover crops that can minimize regional warming impacts.”