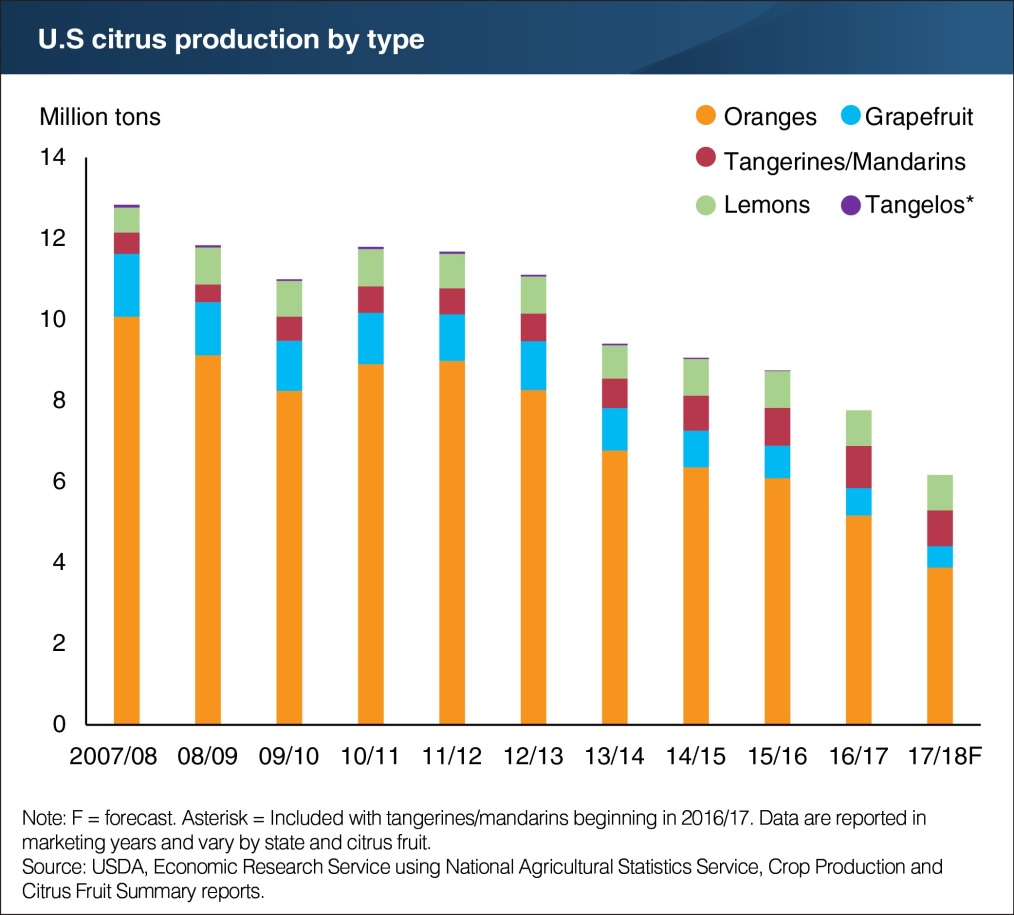 U.S. citrus production continues to decline. At the current forecast of 6.16 million tons for the 2017/18 marketing year, ERS expects the U.S. citrus crop to drop 21 percent from the previous season. The decline reflects expected reductions in national production across all major citrus commodities and overall smaller crops in the four major-producing States (Florida, California, Texas, and Arizona). The drop in citrus production is expected to be the greatest in Florida, largely driven by crop losses from Hurricane Irma. At the same time, orange and grapefruit crops are anticipated to have the largest declines in national citrus output, with reductions of as much as 25 percent and 22 percent, respectively, if realized.

The US Department of Agriculture forecasts a reduction in Florida’s orange crops by 35% in the 2017/18 season, compared to the previous season to 45 million boxes (at 40.8 kg). Florida’s orange crop is expected to be the lowest of the last 75 years – since 1942. Note that before hurricane Irma began, the crop forecast in Florida was 75 million boxes.

Tight supplies have pushed citrus prices higher in the domestic market. January 2018 prices for fresh oranges, grapefruit, and lemons were at their highest average levels for the month since the 1990s.

The long term downward trend in orange production is largely attributable to citrus greening disease, a bacterial disease that can ultimately kill orange trees. The majority of citrus farms in Florida have been battling the disease since the mid-2000s. This chart appears in the bi-annual ERS Fruit and Tree Nut Outlook newsletter, released March 2018.

Expectations of a larger orange crop in Brazil may prevent the growth of orange juice prices. According to the forecast of Fundecitrus, in the 2017/18 season, it may amount to 398.3 million boxes, which is 62% more than in the 2016/17 season and a quarter more than the average orange crop in the country over the past 10 years. Currently, it is difficult to say which forecast will have a major impact on price dynamics.