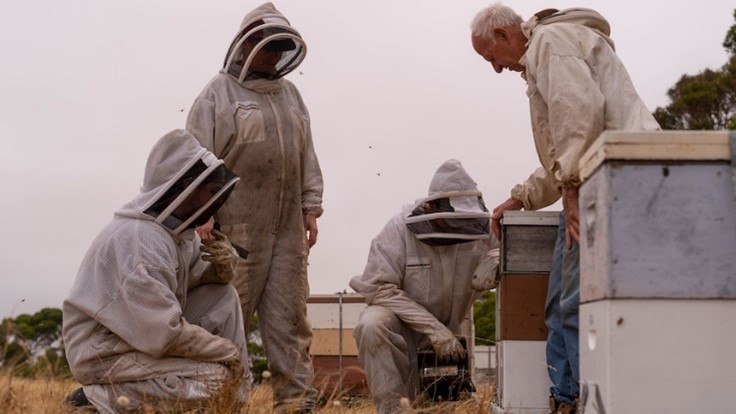 Beekeepers on Kangaroo Island are planting flowers that they have not tried before which will lead to new flavours of honey.

The taste of Kangaroo Island honey could be set to change, as struggling local beekeepers try everything to keep the world’s purest strain of bees alive and thriving after the deadly bushfires.

Kangaroo Island is home to the Ligurian bee and is considered a disease-free bee sanctuary.

But that has come under threat after thousands of bees were killed and more than a thousand hives destroyed when fire ripped through Kangaroo Island in January last year.

Beekeeper Mick Geursen is rebuilding his business of 10 years from scratch, after losing 500 hives and the bees inside, along with his packing shed, stock, equipment and new hives he was planning to use, as well as his home.

But it is a mammoth job to rebuild given tough biosecurity rules mean all hives must be built on the island using local tools.

“It’s just another challenge — we can’t buy bulk things or second-hand things that are made on the mainland, we have to make it all ourselves,” Mr Geursen said.

“We’re the last pure strain of Ligurian bee left in the world, we’re also disease free — we don’t have AFB (American foulbrood) — so everything we can do to keep the industry going over here is really important.”

Beekeeper Mick Geursen has had to rebuild his beekeeping business from scratch after losing everything in the bushfires.

To read the whole article go to;