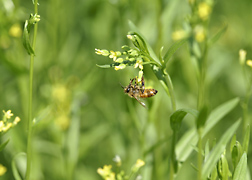 Camelina is an herbaceous, yellow-flowering member of the mustard family whose oil-rich seed and cold tolerance has piqued the interest of U.S. Department of Agriculture (USDA) scientists for its potential as both a winter cover crop and biodiesel resource.

Now, in the process of studying this plant, scientists with USDA’s Agricultural Research Service (ARS) have found that its flowering period can provide honey bees and other insects with a critical, early-spring source of nectar and pollen that’s usually unavailable then. This is especially true in Minnesota, South Dakota and North Dakota, where about one-third of the nation’s managed bee colonies are kept from May through October.

The researchers observed that fields of winter camelina and winter canola (another alternate oilseed crop) produced about 100 pounds per acre of nectar sugar over the course of a two- to three-week flowering season. That quantity, produced in such a short time, is enough to support the annual energy requirements of a typical bee hive, which is 100-200 pounds of sugar per year, according to Frank Forcella, an agronomist with ARS’ Soil Management Research Unit in Morris, Minnesota. He participated on a team of ARS and university scientists which evaluated the attractiveness of camelina, canola and a third oilseed crop—pennycress—during two years of outdoor field trials.

Highlights of the team’s findings—reported in the June 2015 issue of Industrial Crops and Products—are:

Read more about this research in the November issue of AgResearch. ARS is USDA’s chief intramural scientific research agency.

Apimondia is an exciting, dynamic, diverse meeting of the world beekeeping industry. It is the bi-annual congress of the International Federation of Beekeepers’ Associations….