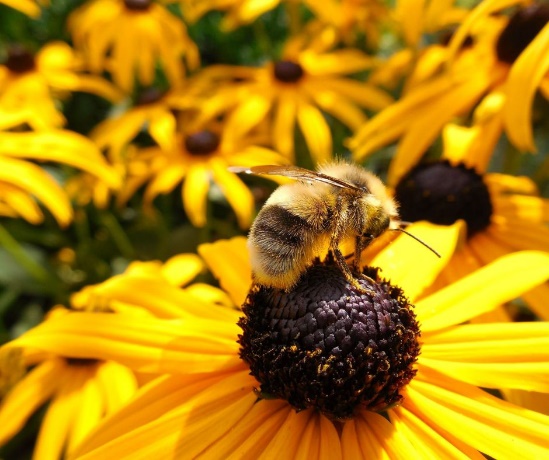 Ames, Iowa — Iowa State University Extension experts say honey bees are facing tough times. Colonies of these pollinators are being lost at an unprecedented rate, and some are blaming farming practices, in particular, the intensive corn and soybean production systems in the Midwest.

New research by Iowa State University and University of Illinois scientists offers a more nuanced view of the role of agriculture in honey bee health than what has been previously known.

Scientists placed honey bee hives next to soybean fields in Iowa and tracked how the bee colonies fared over two growing seasons. The bees did well for much of the summer, they found. The colonies thrived and gained weight, building up their honey stores.

But in August, the trend reversed. By mid-October, most of the honey was gone, the team discovered, and the bees themselves were malnourished.

The researchers moved some of the affected hives to reconstructed prairie sites with a lot of late-flowering prairie plants. Those hives rebounded to healthier levels and were better prepared for winter.

Amy Toth, professor of ecology, evolution, and organismal biology at Iowa State says, “We saw a feast or famine kind of dynamic happening, where in the middle of the summer the hives in ag fields were doing great. In fact, the hives in the most highly agricultural areas out-competed hives in areas with less row-crop production. But then they all just crashed and burned at the end of the season.”

Toth was part of a collaborative team that included ISU entomology professor Matthew O’Neal and others.

Their findings, published in the Proceedings of the National Academy of Sciences, offer new insights into the role of agriculture on honey bee survival, according to the report’s authors.

Overall, the results show that intensively farmed areas can provide a short-term feast, but such landscapes are unlikely to sustain the long-term nutritional health of colonies. However, reintegration of biodiversity into such landscapes may provide relief from late-season nutritional stress.

Soybean and clover bloom until late July in central Iowa, where the study was conducted. In early August, that food supply dwindles greatly, however. Between early August and mid-October, the researchers found that the weight of the study hives next to soybean fields dropped, on average, more than 50 percent. The bees were eating through their winter stores before the onset of cold weather.

The team is testing an intervention, where strips of reconstructed prairie are installed inside or alongside agricultural fields. In addition to feeding the bees at a crucial time in their life cycle, prairie strips could also reduce erosion and prevent the flow of nutrients from farm fields into waterways, the team said.