The president can set a powerful example for the U.S. and the world by filling the White House grounds with America’s native plants and animals 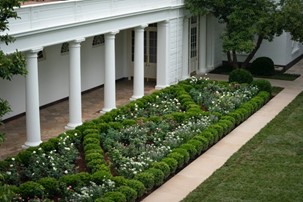 The manicured Rose Garden at the White House as of August, 2020. Credit: Drew Angerer Getty Images

In 1908, when President Teddy Roosevelt was asked about what birds could be seen around the White House, he listed an impressive 93 species. That list included iconic Mid-Atlantic breeding birds like Eastern whip-poor-wills and Baltimore orioles. Unfortunately, due to habitat loss and destruction, these birds and many others on Roosevelt’s list cannot be seen at the White House today. In fact, the past century has witnessed tremendous losses in mammals, amphibians, reptiles, insects, plants and literally billions of birds in just the past 50 years.

To bring back biodiversity, scientists now understand that conservation cannot be restricted to big public parks like Yosemite or Yellowstone. Since more than 60 percent of U.S land is privately owned, with much of it in cities and suburbs, conservation must also include our own yards and gardens. And as the home of a new president who is sympathetic to environmental preservation, the grounds and gardens of the White House—a national park in their own right—are an excellent place to start. The White House and President’s Park should be managed, not as a political football but as a celebration of our nation’s natural identity and as an exemplar of conservation stewardship.

And what better way to celebrate that identity than by filling the White House grounds with America’s native plants and animals? How we landscape our cities and suburbs shapes whether we also support biodiversity, enrich our lives and well-being and adapt to climate change. We can restore America’s endangered songbirds, butterflies, bees and other pollinators by prioritizing native plants over invasive species and lawns, and by reducing pesticides and mowing. Adding small ponds provides new homes for threatened aquatic critters like frogs, turtles and dragonflies. Each tree or pond we include for wildlife also stores carbon, reduces flooding, cleans water and air, cools summer temperatures and improves human health. The White House should exemplify all of this, for the president and for the American people.

If the Biden-Harris administration needs planting suggestions, they can look to the beautiful native wildflower genus Bidens which supports more than 10 percent of the region’s pollen-specialist native bee species. (The name Bidens, which dates to the 18th century, is unrelated to the president.) Native shrubs like cherry viburnum (Viburnum prunifolium) provide safe havens for nests and abundant insects and fruit for the wood thrush, Washington, D.C.’s official bird.

Because the capital is a major stopping point for migrating monarch butterflies, milkweed, asters and goldenrods in the Rose Garden would benefit America’s most famous cross-continent migration. Moreover, revitalizing the biodiversity value of President’s Park’s 82 acres would offer educational opportunities and natural experiences for visiting children along the White House’s walking trails by showcasing the beauty and value of American nature.

Over time, the White House has been an evolving landscape that changes across administrations and serves as an inspirational symbol of American values and policies. Presidential spouses Ellen Wilson, Eleanor Roosevelt and Michelle Obama all used the White House gardens for speeches and events and to inspire American initiatives like victory gardens and healthy diets. Like the administrations of Wilson, Roosevelt and Obama, the Biden-Harris administration should complement its patriotic environmental agenda by infusing a conservation ethos into the most iconic residential parcel on Earth to inspire Americans to protect our nation’s biodiversity at home.

Landscaping the White House to celebrate our national natural identity also signals to world leaders the value of conservation in overlooked green spaces, public or private. By discussing critical geopolitical issues with our president against a backdrop of D.C.’s unique ecosystems and species, influential diplomats worldwide may be inspired to preserve their own nations’ natural identities.

There are already examples of U.S. embassies modifying their grounds in response to federal commitments to celebrate local biodiversity (with pollinator-friendly design, for example) and inspire personal conservation ethics.

Biodiversity loss, like climate change and food insecurity, is a national emergency.

The Biden-Harris administration is embarking on the most ambitious environmental agenda proposed to date, with plans to address climate change, revolutionize clean energy economies, prioritize environmental justice and reactivate America’s commitment to global environmental agreements. One of Biden’s stated goals is to conserve 30 percent of America’s land and water for biodiversity by 2030; a grand challenge given the scale of this conservation initiative must rely on complementary efforts in parks and private lands.

At the same time, the administration has proposed a once-in-a-lifetime infrastructure bill, parts of it which may be seemingly at odds with these environmental goals. The reality is that reimagining how we reinvigorate existing infrastructure and build modern, cutting-edge developed spaces can be done to bolster biodiversity while also enhancing our economy and supporting society. Biden should start this work right at the White House.

To “Build Back Better,” the Biden-Harris administration must build sustainable cities and suburbs. Doing so will combat the biodiversity crisis and also improve climate resilience and societal well-being. Restoring the ecological integrity of the president’s home is an opportunity to rethink the role that everyone plays in conservation and showcase to America and the world our country’s commitment to the environment. It is time to heal ourselves and our homes and ensure that everyone, including and especially those who live in urban communities of color and low-income communities, has access to green spaces and wildlife. The White House should be re-landscaped as the first home of America’s conservation vision to protect biodiversity where we live.

Biodiversity at the White House