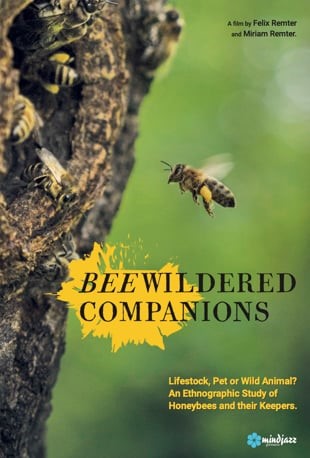 A film for Everyone

Reviewed by David Heaf, with thanks to Patricia Heaf for suggestions and amendments.

Felix and Miriam Remter had 10 years hobby beekeeping experience before they embarked on this film project. Miriam lectures at the Institute of Social and Cultural Anthropology, Munich and Felix is a researcher at Munich Centre for Technology in Society. Both have practical experience of film documentation of culture and this film is an ethnographic study, differing greatly from other bee films, as I hope this review will show.

The film title’s play on words deserves some explanation. Of course, it’s about bees, but the rest of the title seems a bit obscure until you discover that the wildness or otherwise of the bee is one of the themes. And who are the companions? Are they the bees and the humans whose relationship the film is all about? Or are the companions the beekeepers themselves, thrown into companionship by their common struggle against the Varroa mite, the parasite that forms a linking thread throughout the film? Such speculations are not triggered by the film’s original German title, Eine Frage der Haltung, but even that title has subtle ambiguity: at its simplest, it could translate as either ‘A Question of Husbandry’ or a ‘A Question of Attitude’. Yes, the film is certainly about the different bee husbandries of the beekeepers, zeidlers and breeders featured in the film, but they husband their bees with very contrasting fundamental attitudes regarding a pivotal question asked two-thirds of the way through the film by a breeder: ‘What is natural anyway?’.

To view the ‘trailer’ for Beewildered Companions;