When their son’s seasonal allergies became unbearable, Summer and Kam Johnson turned their search for a cure into a family-run honey business. 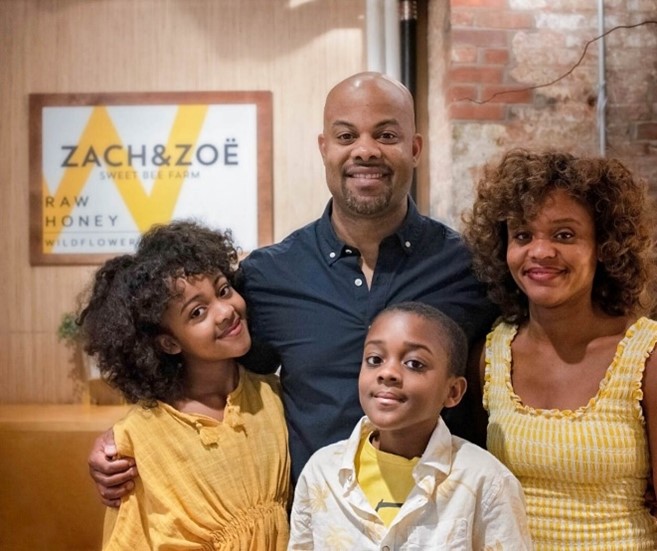 Five years ago, Kam and Summer Johnson were excited to move from Montclair to Hunterdon County, a more rural part of New Jersey. But joy turned to frustration when their son Zach’s seasonal allergies and asthma became worse. “We were in the emergency room a lot, and we didn’t like giving him the steroidal medicines doctors prescribed,” Summer says.

When a friend mentioned the benefits of raw, unprocessed honey, Summer was skeptical, but she did research on immunotherapy, a preventative measure that involves exposing the body to the natural allergens in the air—in Zach’s case, the pollen found in honeybees. Summer decided to conduct an experiment. For a year, she fed Zach two heaping tablespoons of raw honey before bed and incorporated it into as many family meals as possible. By the following year, Zach’s allergies were gone. “Unlike commercial honeys that are mainly corn syrup, raw honey is packed with vitamins and minerals, and it’s a natural remedy,” Summer says.

The Johnsons became believers. If it worked for Zach, they thought it could work for other people, too. So they decided to become beekeepers, turning to apiarist Larry Saums, owner of Bee Flower and Sun Honey, for help.

“We bought three hives from Larry, and within months got our first harvest. It was euphoric,” recalls Kam, who has a career in tech. “From then on, we were hooked.” They named the business Zach & Zoë Sweet Bee Farm after their children.

For Summer, who homeschooled her kids at the time, it was a great opportunity to teach them lessons about agriculture and the effect honeybees have on the environment. It also provided hands-on work experience as the kids learned to smoke the hives and harvest, filter, and extract the honey. They picked up entrepreneurial skills by marketing the business and selling jars at farmers’ markets and popups. What started as three hives has now grown to nearly 50 with about two million honey bees buzzing around their nearly six-acre property.

In spring 2019, the family opened a shop in New York City’s Chelsea Market. A few months later, they got a call from O Magazine requesting samples. Summer put her Bachelor of Fine Arts degree from Howard University to work and designed a beautifully wrapped box that made Oprah’s Favorite Things 2020 holiday list. Business took off, and they now ship worldwide via their online store and Amazon.

“We have a customer who loves the Wildflower Honey with Ginger Root because it clears up her sinuses, sore throats, and bronchial issues,” says Summer. Fans also love their Wildflower Lavender and Wildflower Matcha honeys, and Honeycomb and jarred Bee Pollen were recently added to the online shop. Their business got another boost when it was featured in a national Chase Business Banking commercial. “It was very unexpected, and the timing could not have been better, especially with the pandemic shutdown,” says Kam, who is already eyeing the next ambitious business venture.

Working with the local township and Chase bank, the Johnsons hope to bring an educational farm experience to the area. “We’re an hour and a half west of New York, near Bucks County, Pennsylvania, and the Delaware River. We want to make it a bespoke experience where visitors can come for the day, learn about beekeeping, make honey, and patronize area bakeries, cheesemakers, and vineyards,” Kam says. “It’s super ambitious but we love it here and think others will, too.”

They also hope to expose more African Americans to the beekeeping world. “We are first generation beekeepers, but we’re not alone. There’s a Black beekeeper in Harlem. In Queens. And at least a dozen Black beekeeping clubs. Anyone can do it, and we’re happy to share the tips we’ve learned along the way.” Summer agrees: “The more we can teach people about agriculture, ecology, and health, the better. As Black people, we need to love on our land again, and own land. We lost that pride of ownership because of the stigma of having to work the land and the money made from our labor during slavery.” Zach and Zoë also do their part by speaking at schools and via Zoom. Kam is now balancing his day job with the family’s growing enterprise, raising baby Gabriella who they welcomed last year, and fielding production offers.

“I asked God, where all of this was when I was 20,” Kam says. “He knew best because we probably would not have been ready for it all then.” Summer says, “We feel incredibly blessed to be able to pass a legacy on to our children doing what we love and also helping people live healthier lives.”