Oliver Milman in New York, For The Guardian 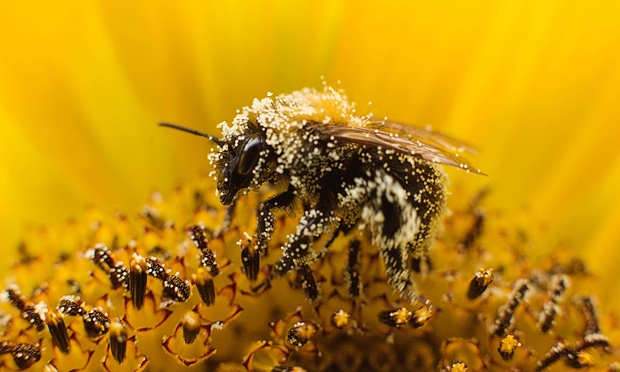 A bee collects pollen from a sunflower. Honeybee populations in the US are under severe pressure, with many pointing the finger of blame at neonicotinoids in pesticides.

Pharmaceutical giant Bayer has said it has put forward proposals for extra protections for bees after initially accusing the Environmental Protection Agency of overestimating the harm caused to the vital pollinators by a widely used pesticide.

A preliminary risk assessment released by the EPA last week found that that imidacloprid, one of the world’s most common pesticides, can cause honey bee populations to fall in some circumstances.

The agency determined that imidacloprid in nectar at levels of 25 parts per billion or above were harmful to colonies, which have suffered an alarming decline in abundance over the past year.

Two crops – citrus and cotton – exceeded this level for imidacloprid, which is in the neonicotinoid class of insecticides, while bees visiting potatoes, rice, corn and wheat didn’t face as great a risk. Further work needs to be done to assess the threat of imidacloprid upon bees that interact with other plants.

Bayer, a dominant player in the neonicotinoid pesticide market, initially said the report:

“appears to overestimate the potential for harmful exposures in certain crops, such as citrus and cotton, while ignoring the important benefits these products provide and management practices to protect bees”.

But the company has now clarified its stance, telling the Guardian that it believes the assessment is “quite good and scientifically sound”. A spokesman said Bayer will look to work with the EPA to reduce risks to bees.

“EPA concluded that when used on citrus and cotton imidacloprid might pose a risk. Note that they didn’t say they are a risk to honey bee colonies,” he said.

“That’s because there are many ways farmers can use these neonics on cotton and citrus crops in ways that reduce risk to honey bee colonies. In fact, there are many restrictions in place that already do this and Bayer has proposed several more to EPA to consider that would put in place additional protections for bees.”

The EPA is in the process of reviewing the impact of three other neonicotinoids – clothianidin, thiamethoxam, and dinotefuran – as well as how other species, such as butterflies and aquatic animals, are affected by pesticides. This work is set to be unveiled in December.

Habitat loss, pesticide use, parasites, disease and poor nutrition have been blamed for the precipitous decline of the animals that pollinate around a third of all the food eaten by humans.

Two studies published in Nature last year cited evidence that overuse of neonicotinoid pesticides was harming bee populations. One of the studies found that bees were drawn to neonicotinoids, which are derived from nicotine, possibly similarly to how humans are attracted to nicotine. This means that bees may prefer a food source that harms their nervous system.

Neonicotinoids are typically coated upon the seeds that farmers plant to grow their crops. The chemicals are absorbed into a plant as it grows, protecting it from pests. But the pesticide can seep into the nectar and pollen, even when the plant is flowering much later. A potential mitigation would be limiting the time before or after blooming when pesticides are used.

The Center for Food Safety, in alliance with various beekeepers and farmers, filed a lawsuit against the EPA last week, accusing it of allowing seeds coated in neonicotinoids to be planted across 150m acres of US soil each year without proper assessments of the impact. Seeds coated in pesticides were not within the scope of the EPA study released last week.

“The report fails to illuminate the risks from a variety of areas, it ignores some the greatest uses of neonicotinoids,” said Paul Towers, spokesman for the Pesticide Action Network. “It only provides a piecemeal view of the threat, given that whole plant pesticides have far larger impacts. The EPA is missing the big picture of the cocktail of pesticides put on plants.

“This report is a cause for concern but what the EPA has failed to acknowledge is also very concerning, not just for honeybees but all bees and the entire food system that rests upon them. The EPA should follow the path of Europe and suspend the use of imidacloprid.”