Bacteria Engineered to Protect Bees from Pests and Pathogens 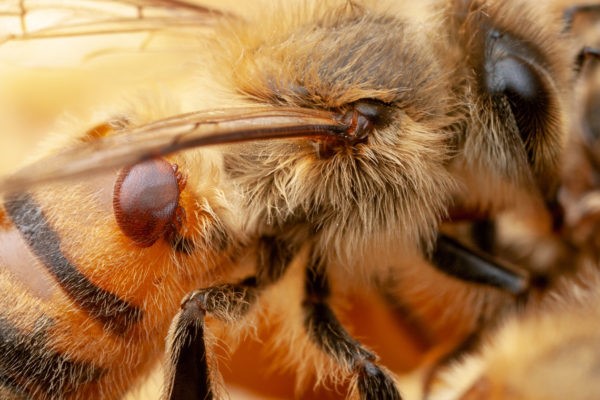 A Varroa mite, a common pest that can weaken bees and make them more susceptible to pathogens, feeds on a honey bee.

AUSTIN, Texas — Scientists from The University of Texas at Austin report in the journal Science that they have developed a new strategy to protect honey bees from a deadly trend known as colony collapse: genetically engineered strains of bacteria.

An increasing number of honey bee colonies in the U.S. have seen the dwindling of their adult bees. According to a national survey, beekeepers lost nearly 40% of their honey bee colonies last winter, the highest rate reported since the survey began 13 years ago.

“It has direct implications for bee health,” said Nancy Moran, a professor of integrative biology and the primary investigator on the study.

“This is the first time anyone has improved the health of bees by genetically engineering their microbiome,” added Sean Leonard, a graduate student and first author of the study.

Varroa mites and deformed wing virus often come together; as the mites feed on bees, they can spread the virus, while also weakening the bees and making them more vulnerable to pathogens in the environment. 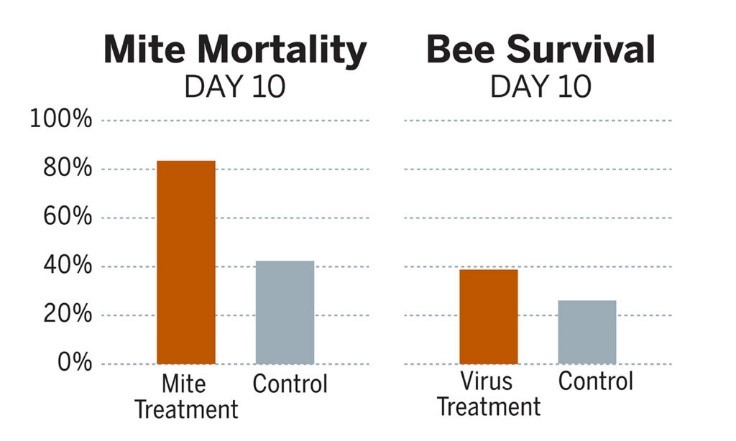 Compared with control bees, the bees treated with the strain of bacteria targeting the deformed wing virus were 36.5% more likely to survive to day 10. Meanwhile, Varroa mites feeding on another set of bees treated with the mite-targeting strain of bacteria were about 70% more likely to die by day 10 than mites feeding on control bees. Credit: University of Texas at Austin.

According to the American Beekeeping Federation, honey bees contribute nearly $20 billion each year to the value of U.S. crop production, and they play an enormous role in global food production. Without honey bees, dozens of crops, from almonds to berries to broccoli, would either vanish or produce significantly less food.

Like humans, honey bees have an ecosystem of bacteria in their guts called a microbiome and also an antiviral defense mechanism called RNA interference (RNAi) that helps the body fight off certain viruses, called RNA viruses. When an RNA virus is introduced, it produces molecules called double-stranded RNAs that a healthy cell detects, triggering an RNAi immune response.

“You usually only get signs of these molecules when an RNA virus is replicating,” Moran said. “It’s a signal that this might be an evil thing and you should attack it.”

To promote a helpful RNAi response to viruses in bees — and trigger a lethal RNAi response in the mites — the team introduced modified bacteria to hundreds of bees in a laboratory setting. Sprayed with a sugar water solution containing the bacteria, the bees groomed one another and ingested the solution. The team found inoculating young worker bees with the engineered bacteria led the bees’ immune systems to be primed to protect them against deformed wing virus, which is an RNA virus, and caused the mites’ own immune systems to fight against and ultimately kill them.

While the experiments occurred under strict biocontainment protocols used with genetic engineering, Moran said, even absent such protocols, the risk of the engineered bacteria escaping into the wild and infecting other insects — and thereby conferring some anti-pest or anti-pathogen superpowers — is very low. The type of bacteria used are highly specialized to live in the bee gut, can’t survive for long outside of it and are protective for a virus that strikes only bees. Still, further research will be needed to determine the effectiveness and safety of the treatments in agricultural settings.

Another benefit of the approach is for researchers to use it as a tool in studying bee genetics. The engineered bacteria can knock down specific bee genes, enabling insights into the workings of the bee genome, and possibly enabling new breeding strategies to produce more robust bee colonies.