Beekeeper Ian Cane normally uses the “sugar shake” to check if his bees have been infested by a tiny but incredibly dangerous alien pest.

Mr. Cane gathers 300 bees in a jar, fills it with icing sugar, rattles it and looks to see if a millimetre-long mite called Varroa destructor falls from the bees’ abdomens. 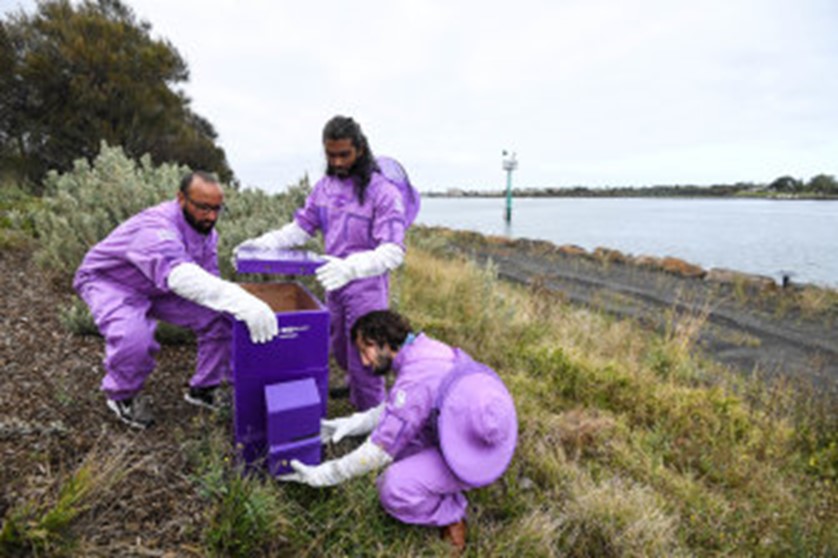 Artificial intelligence experts from startups Vimana Tech and Xailient prepare the purple hives at the Port of Melbourne on Monday. Credit: Joe Armao

Fortunately, he has never found Varroa destructor, which sucks fat tissue out of individual bees, spreads viruses, and can eventually kill off entire hives.

Australia is the only continent in the world free of the exotic mite that would threaten 20,000 horticulture businesses if it entered the country. It would also profoundly disrupt Australia’s food production – about two-thirds of Victoria’s plant-based food requires pollination by bees.

Imagine Mr. Cane’s excitement, then, at Australia’s first artificially intelligent beehives launching at the Port of Melbourne on Tuesday.

Bold purple in colour and shaped like a Ned Kelly mask, the hives feature 360-degree cameras that feed back a rolling video of bees entering and exiting. An algorithm has been trained to detect a healthy bee from one carrying Varroa destructor, saving beekeepers hours of manual labour every week.

“If you look in a beehive, say, in the middle of summer, we’re in full production, there’s 45,000 to 60,000 bees in that hive. So to find two varroa [mites] is literally the needle in the haystack, and a big haystack. It’s painstaking,” Mr Cane, who is based in East Gippsland, said.

“With this I can have bees 600 or 700 kilometres away from my home, I can sit there on a laptop, see this happening and flag any problems in real time.”

The Port of Melbourne was chosen for the first purple hives because the greatest threat of Varroa destructor entering Australia is via cargo ships, where infested bees from overseas could be lodged between shipping containers.

A savvy sea captain who noticed a swarm of bees and alerted the Victorian government in 2018 prevented an outbreak of the pest. 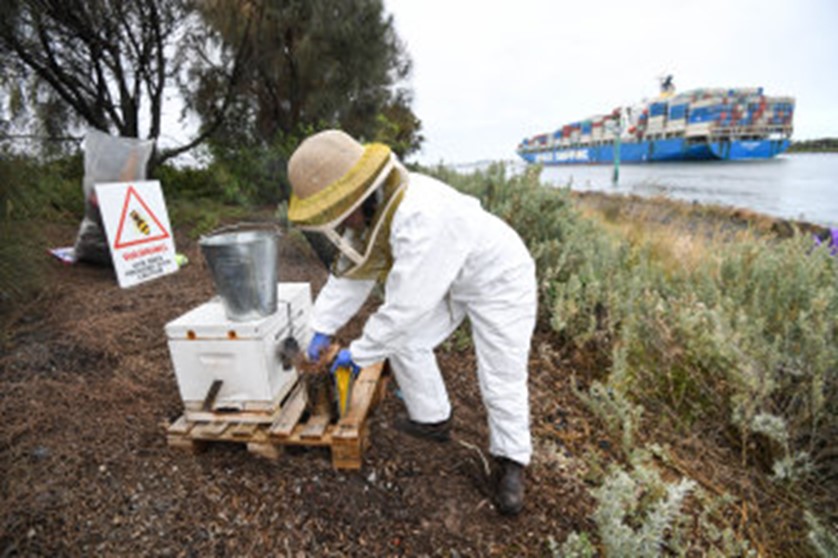 Earlier this month Woolworths released images of what their shelves would look like without bees. Apples, avocados, canola oil, nuts, coffee beans and strawberries were just some of the items off the menu. And, you guessed it, honey too.

Melbourne startup Vimana Tech and Sydney and Silicon Valley-based startup Xailient worked on what they called world-first technology for over a year.

“Just like teaching a child, we trained the algorithm and over time, like all AI, it gets better and better” detection can prevent the pest spreading widely.

The harmony of artificial intelligence and agriculture is an area expected to grow exponentially – in recent years it’s been used to forecast weather conditions, assess plant nutrition on farms and identify weeds.

Joel Kuperholz, co-founder of Vimana Tech, said even within beekeeping his team is eyeing further steps.

“We have the ability to upload new algorithms to detect any other anomaly or other pests or insects that might be trying to penetrate the hive and pose a risk,” he said.

Mr. Cane, whose family has been breeding bees for more than 100 years in Victoria, said his “head is just spinning” at what other efficiencies the technology could bring to his industry.

“It will really change how we operate as beekeepers,” he said.

Bee team: How hives at Canberra Airport are our biosecurity frontline

“We’re currently preparing hives to do almond pollination, that’s a billion dollar farming industry in Australia. The world would be a very different place for humans without honey bees.”

“We know that the varroa mite is in New Zealand already, and we’re working very hard to ensure that it does not enter Victoria,” she said.

“I would look forward to a project like the purple hive rolling out across the country.”