Bees and the Australian Fires

Australia is on fire. When I heard about the thousands of people who were fleeing – some being rescued from beaches by the navy – and then saw photos of black smoke, red skies, and stampeding kangaroos, I worried about the firefighters, homeowners, and displaced people. Then I began to worry about the bees of Australia.

The country has hundreds of species of bees, many residing in eucalyptus forests, which are comprised of oily trees capable of igniting like candles. Australia’s native bees are being consumed by flames, even as you read these words. The bush fires have killed trillions of insects and half a billion vertebrates. Those estimates are based on the landscape, 60,000 km² (24,000 square miles), burned so far. That’s an area larger than the state of West Virginia. It’s an area equal to 15% of all the arable land in Australia. The entire country is affected by ash and drifting smoke. Some of the soot has travelled at least 2,000 miles to New Zealand, causing mountain-top glaciers to turn grey.

Yesterday, the temperature topped 120 °F, (49 °C) around Sydney, Australia’s largest city, and 111 °F (44 °C) in Canberra, the capital. Even without fire, honey bees have a rough time surviving such heat. 120 °F is the temperature that honey combs, laden with honey and brood, begin to sag. Comb will eventually be wrecked in the hive, especially if covers aren’t shaded or insulated. Before 100 °F, most bees quit foraging and those that are flying carry water to cool their colony.

Smoke from forest and bush fires also cause severe problems. With black sooty smoke shrouding vast areas, nearly every bee in the country has had days of disrupted foraging. Just like you and me, bees can’t work well when the air is thick with smoke.

Australia’s drought – now in its fifth or sixth year – was devastating this spring.  Even without bush fires, honey bees have been doing poorly because flowers have dried out. Due to the lack of rain, beekeepers have been losing money in Australia for several years. In Tasmania, honey production has dropped by 90% due to drought and smoke. Now it’s much worse.

It’s much worse because bee yards have been ravaged, colonies killed, equipment torched, combs destroyed. I haven’t heard all the bad news, but what I’ve heard is sobbering. Beekeepers are emotionally drained. They live their lives around bees. They build their equipment themselves, by hand. They care for their honey bees, work to prevent diseases and strive to keep their little helpers safe and healthy. Beekeepers become attached to the wonders of the hive and the bees themselves.

So, it’s devastating when you can’t help the bees. Late last month, when a beekeeper tried to move his hives out of a threatened forest (fires were 60 kilometres away), he found the road barred by police who wouldn’t let him enter. Fire fighters said it was too dangerous, and they would know the risks. It took almost a week for the flames to burn a path to his apiaries, but fire eventually arrived. The beekeeper lost eight hundred colonies in the blaze. Financially, it’s almost impossible to recover from such a loss. The emotional strain of losing the beautiful insects will take years to overcome.

I know a hard-working beekeeping family, the Curkpatricks, in the state of South Australia. I’ve done a little business with them in the past. I’d been worrying about their south-coast honey farm for a few weeks. Here are pictures from one of their apiaries – after fire swept in during the last few days of 2019.

This is what they saw, driving into their apiary, at 8am December 31: 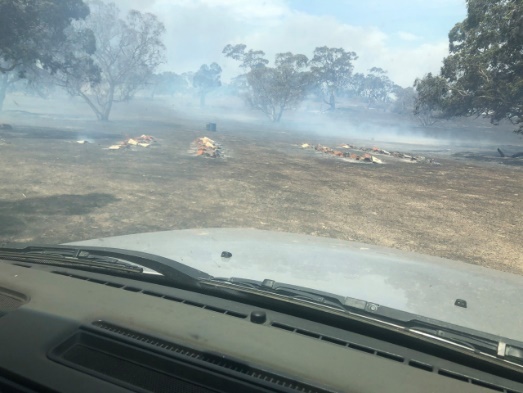 The colonies were completely destroyed. Below, you can see the mix of melted comb, hundreds of pounds of honey, and charred honey bees. 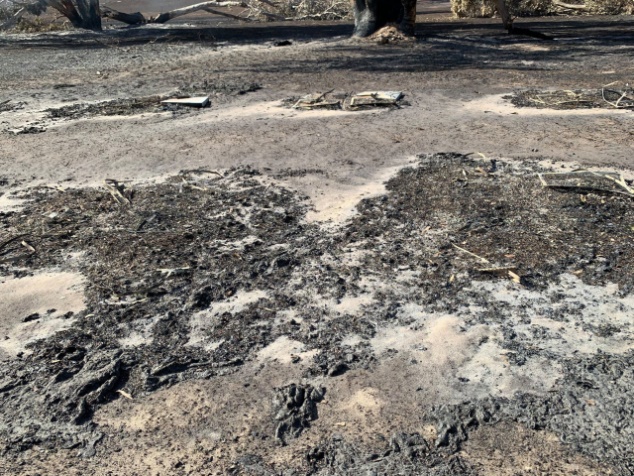 Destruction and loss. Honey bees won’t leave their hives, even when their combs are burning. The fire swept through the yard, burned the hives, and kept moving. It doesn’t look like there was a lot of brush, probably mostly tall dry grass. The fire was likely moving very fast, propelled by high winds, as the lower tree trunks were scorched, but not the upper branches. Unfortunately, when the flames reached the hives, the equipment (and bees) burned.

Below is a detail from the photograph above. You can see that the eucalyptus trees took quite a bit of trunk damage. The debris in the foreground, of course, is from beehives that caught fire. 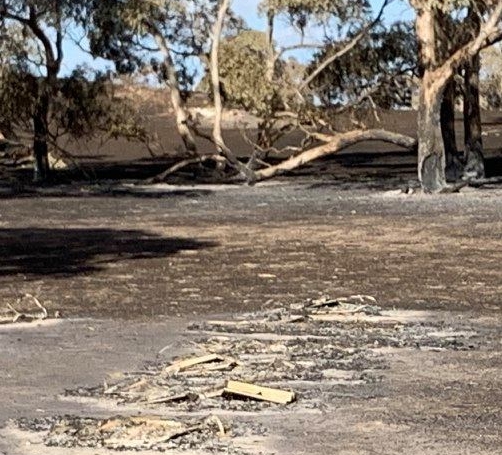 This was a horrific fire. I hope that the family that managed these bees will quickly recover from their nightmare. If you would like to help them (they produce beautiful comb honey) check their store, restaurant, and Facebook website.

The Curkpatrick family is not the only beekeeping family with major losses. As a result, several initiatives have started fundraising campaigns for Australia’s beekeepers. Here is one that details why beekeepers particularly need help and it offers a way that you can participate. Please do what you can to help.

Reporting the honey bee damage does not trivialize the loss of human life, homes, and larger animals in Australia. So far, over two dozen people have perished while fleeing or fighting the fires. Today I learned about cattle dogs who died alongside the cows they were trained to protect. The cattle were trapped against a barbed-wire fence. The dogs wouldn’t leave their cattle, even as the fire consumed them.

Meanwhile, there has been some nasty press about the Australian government’s lack of climate action. Even the New York Times has pointed out the irony of a government in climate-change denial, now trying to sweep up the ashes. As a person who has spent thirty years working in geophysics, and now involved in statistical ecology, I’ve seen the data and I understand it. Although the Earth has experienced higher temperatures in the distant past, I know that this disaster has been fuelled by coal and oil. But I won’t blame the hard-working farmers, ranchers, and beekeepers. They are the victims here.

There has also been finger-pointing directed at land managers who didn’t burn off the bush from time to time in controlled fires that would have reduced this week’s carnage. Indigenous Australian traditions included regular, well-timed burning of the brush. Western practises ignored those customs, greatly exasperating the inferno. There is plenty of blame to share for the conditions that led to this summer’s Australian bush fire disasters. Changes will be made on all fronts.

Summer is far from over. The damage will last for years, especially the mental trauma. Beekeepers often work in very remote areas. Some have reported that hearing the anguished screams of injured, burnt animals in bush and forest apiaries has severely affected them and their young beekeeper-labourers. This is horrific, it won’t end soon, and effects will last for years. For today, let Australians focus on recovery and the challenges ahead. Then they will roll up their sleeves and do what needs to be done to prevent future catastrophes.