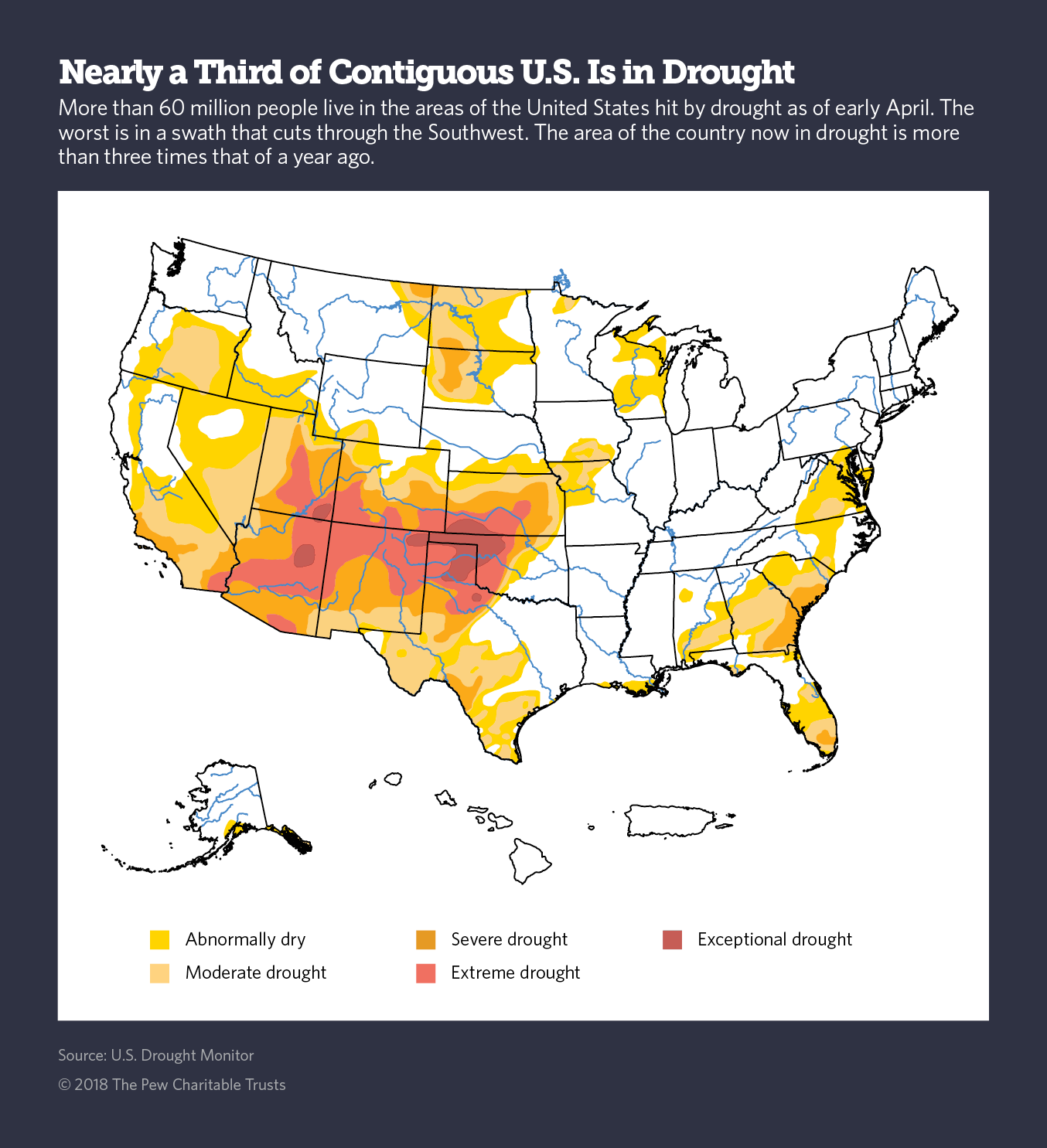 AUSTIN, Texas — Less than eight months after Hurricane Harvey pelted the Texas Gulf Coast with torrential rainfall, drought has returned to Texas and other parts of the West, Southwest and Southeast, rekindling old worries for residents who dealt with earlier waves of dry spells and once again forcing state governments to reckon with how to keep the water flowing.

Nearly a third of the continental United States was in drought as of April 10, more than three times the coverage of a year ago. And the specter of a drought-ridden summer has focused renewed urgency on state and local conservation efforts, some of which would fundamentally alter Americans’ behavior in how they use water.  Moreover, 6 of the 10 top honey producing states are already under drought conditions, including  ND, SD, CA, FL, TX, and ID. A second year of drought in these states would be disastrous for the 2018 US honey crop.

In California, for example, officials are considering rules to permanently ban water-wasting actions such as hosing off sidewalks and driveways, washing a vehicle with a hose that doesn’t have a shut-off valve, and irrigating ornamental turf on public street medians. The regulations, awaiting a final decision by the California State Water Resources Control Board, were in force as temporary emergency measures during part of a devastating five-year drought but were lifted in 2017 after the drought subsided.

Water restrictions, either forced or voluntary, are nothing new to states and communities where battling drought is often a part of life. In Amarillo, Texas, the city’s water department stresses conservation with the message, “every drop counts,” and urges customers to do “at least one thing a day to save water.” A similar mantra — “squeeze every drop” — is part of the water-saving culture in Oklahoma City, where officials enforce mandatory lawn-watering restrictions and impose higher rates for excessive water use.

Years of studies by government and environmental groups have warned that future demand for water is threatening to outstrip availability, particularly in the drought-plagued West and Southwest, unless policymakers take steps to reverse those trends.

“More and more cities around the world are running into limits on how much water they have available to meet their needs,” said Peter Gleick, co-founder of the Oakland-based Pacific Institute and an expert on water and climate issues.

The picture of a coastal metropolis going without water once seemed inconceivable. But as a waterless Cape Town has become a potential reality, its story has sparked new concerns over the growing scarcity of the planet’s most basic resource.

U.S. government and environmental experts generally agree that no major city is in imminent danger of the kind of scenario confronting Cape Town. But residents in some small communities have struggled, and at the same time, U.S. experts worry that protracted global warming, worsening droughts, vanishing groundwater and growing populations will erode future supplies and make Americans increasingly vulnerable throughout the 21st century.

One critical water resource threatened by shortages is the Colorado River System, which includes parts of seven states and provides water for up to 40 million people. In the absence of “timely action to ensure sustainability,” the U.S. Bureau of Reclamation said in a 2012 assessment of the river basin, “there exists a strong potential for significant imbalances between water supply and demand in coming decades.”

For the rest of this drought story, including CA, TX, AZ and other state conditions click here http://www.pewtrusts.org/en/research-and-analysis/blogs/stateline/2018/04/17/drought-returns-to-huge-swaths-of-us-fueling-fears-of-a-thirsty-future?hd&utm_campaign=2018-04-25+PNN&utm_medium=email&utm_source=Pew

July 9, 2018 by International Trade Compliance Blog On July 6, 2018, the Agricultural Marketing Service (AMS) published in the Federal Register a final rule clarification regarding the country of…