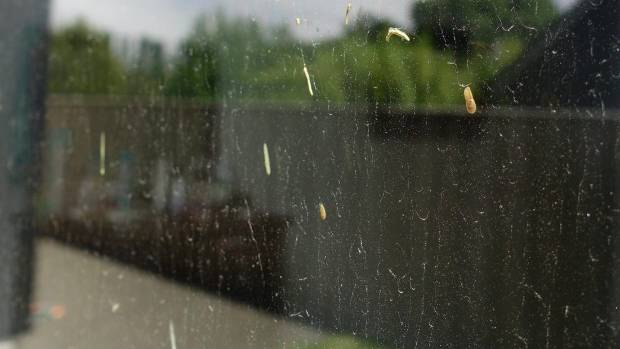 Home owners in a new Christchurch housing development are being bombed by yellow poo. Bee poo.

The Highsted development houses are getting covered in little yellow streaks thanks to thousands of bees flying overhead who prefer to do their daily business on the wing and away from the hive.
Residents say the poo streaks land on their roofs, windows, cars parked outside, and washing on the line.
Even more annoying, the waxy sticky bee poo is difficult to wash off – not that cleaning helps much because the streaks are quickly back again.
Highsted Rd home owner Michael Geare said the bees were coming from hives in paddocks just over the road about 100m away. The bees’ flight path to and from the hives takes them over the new homes.
“I’d never heard of bee poo before,” he said. “We wondered what it was.”

Geare said other home owners were also complaining about bee poo on windows, washing and cars.

He had spoken to the beekeeper, who is breeding queen bees at the site.

Geare said he asked him if something could be done.
“I even offered to put on a bee suit and help him move the hives farther away,” Geare said.
“It was amicable. There must be thousands and thousands of bees there, it’s way more than just a few hives. But there’s goodwill about it all. He was a friendly guy and hopefully we can get it sorted.” Geare’s neighbour, a teacher who didn’t want to be named, said she first heard of the problem when her new home’s builders complained about their cars being covered by a mysterious substance.

“The builders were guessing all sorts of things, including dumped jet fuel, that was the one that made me laugh the most.”

“It shows up especially on dark things, dark cars and dark houses.” Her house is black and tan and her car is black.

The teacher said the spots were hard to clean. She had a window cleaner who charged extra because of the difficulty, so now she does it herself.

“It takes a good rub on every little spot. Now I know that it is wax, I am going to use warm water in the bucket.”

But she didn’t want the bees to be forced away.

“The bees were here first and we like the rural aspect. So that’s part of rural life in some ways, even though we are 12 minutes from the city centre.”

“We are blatantly aware that the bee population has dropped and that schools are putting hives in and teaching kids about the value of having bees. So I don’t want to petition to have the bees removed. I just want to find a solution. If we can’t, then we’ll just keep cleaning. We’ll box on with it.”

In an ironic twist, Peter Nichols, who leases the land to the beekeeper, said his problem with the bees was they stayed inside the hives during the wet spring.

That meant his 180 cherry trees will only produce 10 per cent of the crop they should this summer. And it highlighted how important bees were.

He said if the bees weren’t there, he would have to go back to hiring beehives to pollinate his cherry tree and blueberry crops.

“I used to live where the next door neighbour noticed I had bees, and then next thing I was getting a lot of complaints about bee poo on their washing.

“This sort of stuff happens, but usually it is seasonal. It will die down in winter and in summer when different food sources are found. But if you have a really big hive and the only food source is a patch of clover the other side of houses, then there are probably thousands of bees an hour going over there, then you are going to get splatter.

“The more bees you have the more bee poo you will have around. That’s just the way it is.”

Apiculture New Zealand is the national beekeeping industry organisation and board member Paul Martin said occasional complaints over spots on washing, cars and windows were heard each year.

“In a non-urban situation you wouldn’t even know about it. I have bee hives near my house and I can’t say and I’ve ever seen a bee poo on anything important, but they fly out over a paddock so I wouldn’t expect to.”

He was working on a new guide for urban beekeeping to help minimise problems. More beehives were being brought into urban areas and beekeepers needed to work on ways to eliminate nuisances.

“We are also working with a number of councils to try and develop sensible bylaws, because obviously beekeepers in towns need to be sensible about number of hives they have on a small urban section.”

His advice when there were problems was to have a polite chat with the beekeeper and see what could be done remove or reduce a problem.