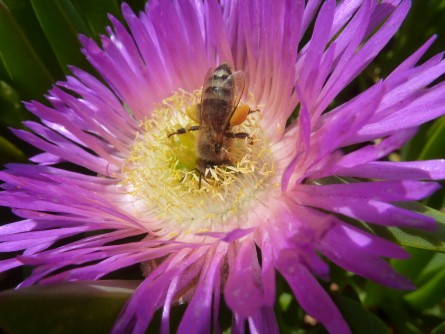 The proportion of all floral visits contributed by the western honey bee in 80 plant-pollinator interaction networks in natural habitats worldwide. Honey bees are generally considered a native species in Europe, the Middle East and Africa, and introduced elsewhere. Credit: UC San Diego

An unprecedented study integrating data from around the globe has shown that honey bees are the world’s most important single species of pollinator in natural ecosystems and a key contributor to natural ecosystem functions. The first quantitative analysis of its kind, led by biologists at the University of California San Diego, is published Jan. 10 in Proceedings of the Royal Society B.

The report weaves together information from 80 plant-pollinator interaction networks. The results clearly identify the honey bee (Apis mellifera) as the single most frequent visitor to flowers of naturally occurring (non-crop) plants worldwide. Honey bees were recorded in 89 percent of the pollination networks in the honey bee’s native range and in 61 percent in regions where honey bees have been introduced by humans.

One out of eight interactions between a non-agricultural plant and a pollinator is carried out by the honey bee, the study revealed. The honey bee’s global importance is further underscored when considering that it is but one of tens of thousands of pollinating species in the world, including wasps, flies, beetles, butterflies, moths and other bee species.

“Biologists have known for a while that honey bees are widespread and abundant—but with this study, we now see in quantitative terms that they are currently the most successful pollinators in the world,” said Keng-Lou James Hung, who led the study as a graduate student in UC San Diego’s Division of Biological Sciences. He’s now a postdoctoral researcher at the Ohio State University.

Honey bees are native to Africa, the Middle East and Southern Europe and have become naturalized in ecosystems around the world as a result of intentional transport by humans. While feral honey bee populations may be healthy in many parts of the world, the researchers note that the health of managed honey bee colonies is threatened by a host of factors including habitat loss, pesticides, pathogens, parasites and climate change.

“Although they appear to have a disproportionate impact on natural ecosystems, surprisingly we understand very little about the honey bee’s ecological effects in non-agricultural systems,” said study coauthor David Holway, a professor and chair of the Section of Ecology, Behavior and Evolution in Biological Sciences. “Looking to the future this study raises a lot of new questions.”

For instance, in San Diego, where honey bees are not native, they are responsible for 75 percent of pollinator visits to native plants, the highest honey bee dominance in the set of networks examined for any continental site in the introduced range of the honey bee. This is despite the fact that there are more than 650 species of native bees in San Diego County as well as many other native pollinating insects.

“The consequences of this phenomenon for both native plants that did not evolve with the honey bee and for populations of native insect pollinators is well worth studying,” said Joshua Kohn, the study’s senior author.

“Our study also nicely confirms something that pollination biologists have known for a long time: even in the presence of a highly abundant species that pollinates many plant species, we still need healthy populations of other pollinators for entire plant communities to receive adequate pollination services,” said Hung.

The reason for this, Hung noted, is that in habitats where honey bees are present, they nevertheless fail to visit nearly half of all animal-pollinated plant species, on average.

“Our take home message is that while it’s important for us to continue to research how we can improve the health of managed honey bee colonies for agricultural success, we need to further understand how this cosmopolitan and highly successful species impacts the ecology and evolutionary dynamics of plant and pollinator species in natural ecosystems,” said Hung.

Coauthors of the study include Jennifer Kingston of UC San Diego and Matthias Albrecht of Agroecology and Environment, Agroscope, Reckenholzstrasse, in Switzerland.

ANOTHER TAKE ON THIS SUBJECT….

Flower Visitors vs. Pollinators: no evidence that honey bees are the most important pollinator worldwide

Pollination is a complex process. It’s not as easy as an insect simply visiting a flower.This is important to remember when talking about which species are the ‘best’ or ‘most important’ pollinators. Simply observing an animal visiting a flower is not, on its own, evidence that the animal is pollinating the flower.

Many insects (and other animals) visit flowers, to feed on pollen, nectar or other flower parts. Many of these interactions result in pollination…although some visitors are better pollinators than others. Some of these visitors commit floral larceny – they are robbers or thieves (there’s a difference!) of either pollen or nectar, and they leave without pollinating. Some might even damage flower parts so much that they indirectly affect the flower’s capacity to be pollinated by other visitors.

To know for sure that an insect is pollinating a particular flower, we first need to know what kind of reproductive system that flower has. Is it male, female or bisexual (containing both male and female parts)? Can it self-pollinate, or does it need to be outcrossed to another flower or plant of the same species? Once we know this, we then need to watch the behaviour of the insect that visits that flower. Does the insect visit one flower and fly away, or many flowers in a row? Does it move between plants? Does it actually touch the reproductive parts of the flower when it visits each flower?

This study, just published this week, looks at plant-pollinator networks around the world.

Despite the media coverage, this study does not show that European honey bees are the most important pollinator worldwide.

What the study actually shows is that honey bees are the most frequent flower visitors recorded in the 80 plant-pollinator network studies that the authors analyse. This is not evidence of ‘worldwide importance as a pollinator’. Many countries are missing from the map of where these studies were conducted. Some studies are from countries where the honey bee has been introduced – and honey bees can have negative impacts on native plants and pollinators in their introduced range (there are still lots of unanswered questions about these interactions).

Visitation vs Pollination. Saying that a flower visitor is the most important pollinator of a plant is like saying that a window-shopper spends the most money in-store. This study found that Apis mellifera (the European honey bee) was the most frequent floral visitor in 17 of the 80 networks analysed. None of these networks measured pollination. Honey bees weren’t even recorded in all the networks – only 41 out of the 80 networks documented A. mellifera as a flower visitor in the system. And honey bees didn’t visit nearly half (49.38%) of the plant taxa in these networks. Describing plant-pollinator visitation networks is a standard method for sampling interactions between flowers and insects and this method is used frequently by pollination ecologists. But describing a plant-pollinator network rarely tells us anything about the pollination efficiency or effectiveness of the insects observed during sampling. The authors of this particular study looked at pollination effectiveness using a completely different set of studies to the ones they analyse for visitation rates. From this other group of studies, they found no difference in effectiveness between honey bees and non-honey bee pollinators, based on single visits to flowers. In fact, they found that A. mellifera was “generally less effective” than the most effective non-honey bee pollinator. This is not evidence that honey bees are ‘the most important’ pollinator.

Ecological ‘importance’ is contextual. We know very little about the reproductive system of most plant species in the world, let alone what pollinates them. An important pollinator for one plant species may never interact with a neighbouring plant species. Some plants are highly specialised to only be pollinated by one particular group of animals; other plants will attract many different animal species to spread their pollen far and wide. Some insect pollinators, including many bee species, also visit flowers of wind-pollinated plants to collect pollen. And here are some great studies that have found that honey bees are not always the most effective or efficient pollinator for many crop varieties: Wild pollinators enhance fruit set of crops regardless of honey bee abundance; Non-bee insects are important contributors to global crop pollination. And don’t forget the birds, mammals and even reptiles that also pollinate many plants around the world.

In a nutshell: it’s ecologically impossible for a single species of insect to be ‘the most important pollinator’ worldwide, in all climates, all ecosystems, and for all plant species.