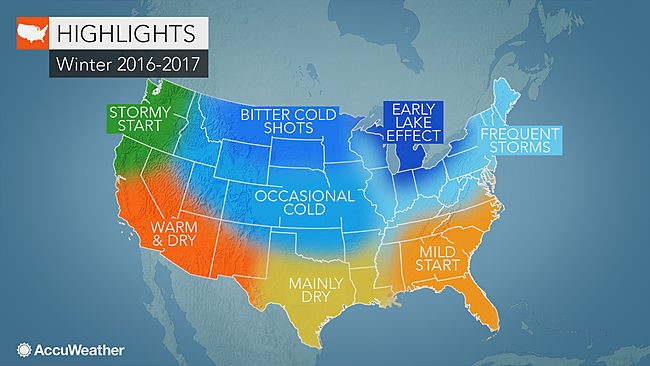 AccuWeather Global Weather Center – September 28, 2016 – AccuWeather reports it will feel like an extended winter for those living from the northern Plains to the eastern U.S., as cold and snowy conditions stretch into spring 2017.

Meanwhile, drier and milder weather will focus on the majority of the southern half of the nation. The Southeast may mark the exception as a chilly January threatens to damage the region’s citrus crop.

Frequent storms to bring above-normal snowfall to northeastern US.

Frequent storms across the northeastern U.S. this winter may lead to an above-normal season for snowfall.

“I think the Northeast is going to see more than just a few, maybe several, systems in the course of the season,” AccuWeather Long-Range Forecaster Paul Pastelok said.

Unlike last season, in which most of winter’s snowfall came from a few heavy-hitting storms, this winter will last into the early or middle part of spring and will feature frequent snow events.

According to Pastelok, accumulation may be limited in areas south of New York City, such as Philadelphia, D.C. and Baltimore. These areas will see a handful of changeover systems, where falling snow transitions to rain and sleet.

“But still, Boston, Hartford, along the coastal areas up into Connecticut and southern New England, they can still have a fair amount of snow,” he said.

Overall, it’s predicted that the region will total a below-normal number of subzero days, though the temperature will average 3-5 degrees Fahrenheit lower than last year.

Damaging freeze may threaten citrus crop in southeastern US

Winter will slowly creep into the Southeast this season, as very mild air hangs on throughout the month of December.

However, the new year will usher in a pattern change as a sudden burst of cold air penetrates the region.

“I am afraid that we have a shot at seeing a damaging freeze in central Florida in mid- to late January this year,” Pastelok said.

The chill could spell disaster for the area’s citrus farmers.

Cold air will once again retreat following January and the threat is predicted to shift to severe weather.

“Places like Atlanta, Chattanooga, even up into Roanoke, they could have some severe weather,” Pastelok said. “But if the storm track is a little farther east, then you’re looking more like Tallahassee to Savannah and, maybe, Charleston.”
Bitter cold to grip the northern Plains, Midwest

Old man winter won’t hold back in the northern Plains this season with shots of brutally cold air predicted to slice through the region.

Developing snowpack in early December may contribute to even colder weather. Temperatures will plummet as the season goes on, averaging 6 to 9 degrees lower overall than last winter.

“…There are going to be some nights, especially if there’s snowcover in the heart of winter, that could get down to 20 or 30 below, especially in parts of Minnesota like International Falls and Duluth and parts of the Dakotas,” Pastelok said.

Cold air will also remain entrenched across the Midwest after arriving in late November. Coupled with warmer waters over the Great Lakes, an early start to lake-effect season is in store.

“I do feel we’re going to kick this season off pretty quick, especially the western lakes. But I think even the eastern lakes will get involved and it will extend all the way out to January,” he said.

Winter to get late start across southern Plains, Gulf Coast

Fall-like weather will linger into the winter season across the southern Plains and Gulf Coast, but a change will loom on the horizon.

“A turnaround could come into late December and January as chillier air masses work down from the north,” Pastelok said.

Though the milder weather will retreat, dryness will stick around, becoming a major theme of the season.

“The area of the country that may miss out on big [snow] storms this year may be Dallas and Little Rock,” he said. However, a few disruptive ice events are not out of the question.
Early storms to blast Northwest, northern California

Winter will waste no time in the northwestern U.S. and northern California, as the season kicks off with rain and winter storms.

“They’re going to start out pretty wet, especially from northern California into the Northwest coast,” Pastelok said. “I think that, right off the bat in December, we start to see the snow piling up in the mountains.”

November and December will see the most action, before high pressure builds in and stormy weather eases back in late January and February.
Dry, warm season in store for Southern California, Southwest

While moisture aims for the Northwest, warm and dry conditions will span much of the season for central and Southern California and the Southwest.

“December is [looking] very warm [in the Southwest] and I think we could break some record high temperatures,” Pastelok said.

A few cold shots will hit areas like Phoenix and Flagstaff, Arizona, in January, but the warm weather will quickly rebound.

For Southern California, the pattern will exacerbate ongoing drought conditions.

“We’re in a pattern that doesn’t really show a lot of rain coming toward Southern California, so I don’t expect too much relief,” Pastelok said.

What precipitation does fall in California will aim primarily for the north, though it will fail to have the significance of last January when the region was hammered by heavy rain and snow.

“I do think in the early part of the season we’re looking good anywhere from San Francisco, Sacramento and into the mountains,” he said.

“…If we can get some snowpack built up in the north, we can fill up these reservoirs going into spring and summer.”