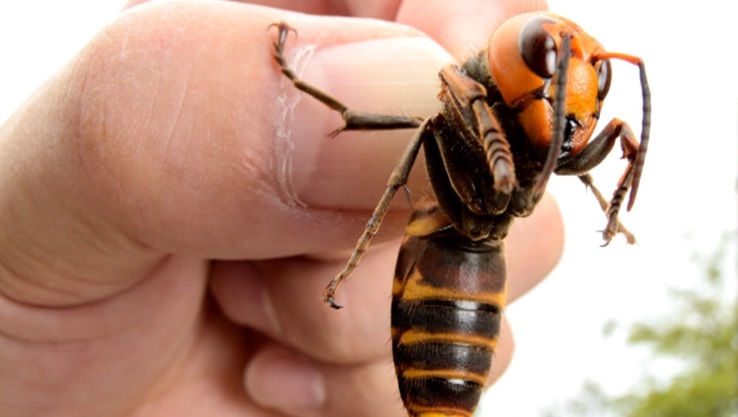 This is an Asian hornet

Rise of the Insects A UK Jersey-based drone was brutally attacked by a swarm of Asian hornets after disturbing a nest thought to contain thousands of the angry insects.

The brave drone was attacked by the hornets while being used by the Jersey Fire and Rescue service to locate the creatures’ nest. Asian hornets are an invasive species which feeds on native British bees and other insects.

Operators thought the sound of the drone’s propellers alerted the vicious hornets to its presence, prompting them to swarm over the unmanned aircraft, attempting to sting it and leaving jets of venom over the craft’s casing.

The hornets’ nest is in trees near Jersey’s La Crete Quarry, St Martin. Pest controllers are aware of its location and are making plans to destroy the nest. ITV reckons that the nest is around a metre long and may contain up to 200 queens, which can each start a new nest.

The BBC reports that the nest which the drone was being used to hunt down is “thought to contain about 6,000 hornets”. Sightings of Asian hornets have been reported in the south of England, while the Department for the Environment, Food and Rural Affairs (Defra) has even launched an app for members of the public to report suspected Asian hornet nest locations.

As the British Beekeepers’ Association says: “As a highly effective predator of insects, including honey bees and other beneficial species, it can cause significant losses to bee colonies, other native species and potentially ecosystems… do not under any circumstances disturb or provoke an active hornets’ nest.” ®