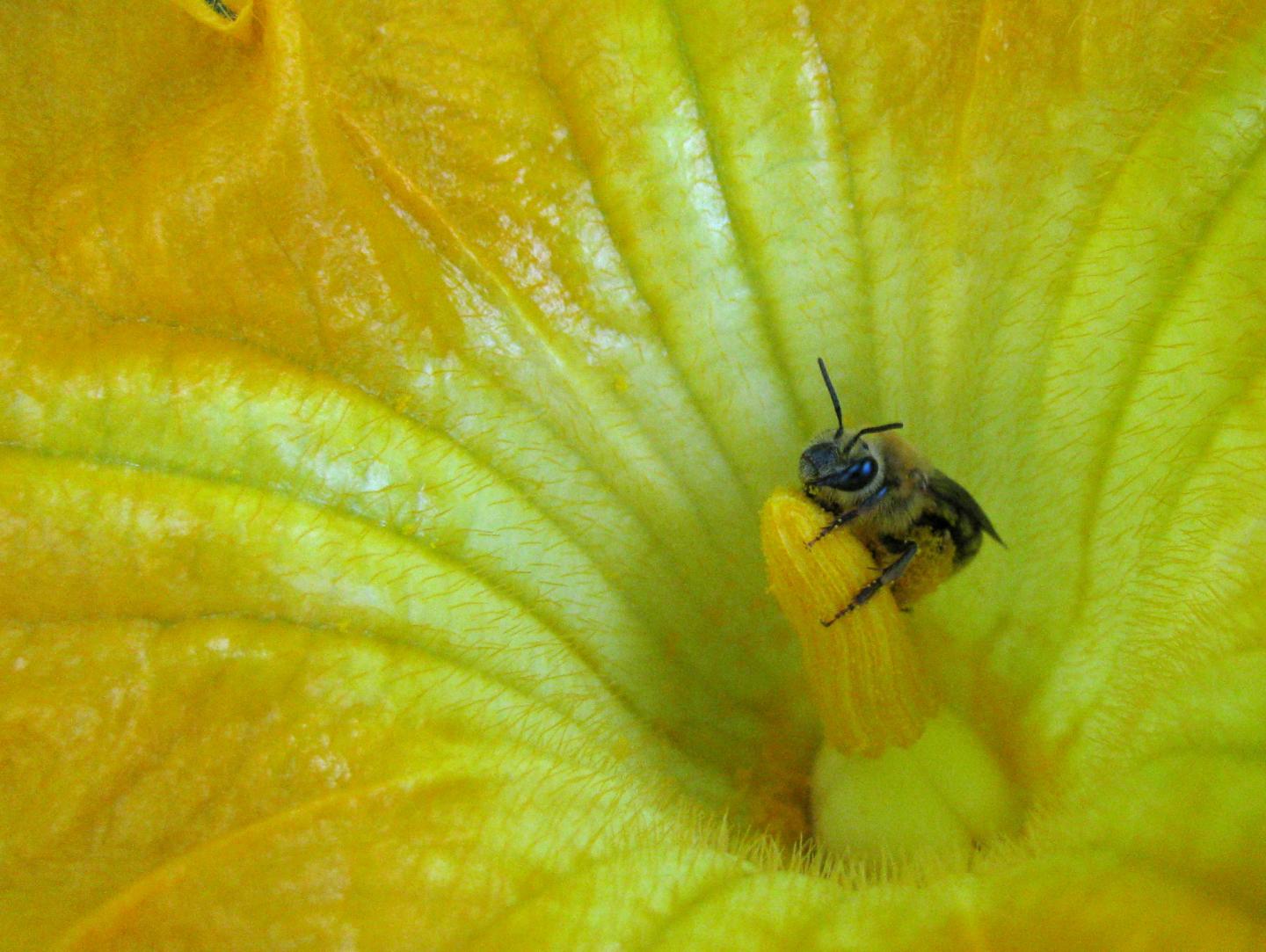 IMAGE: Using genetic markers, researchers have found that the spread of the squash bee in pre-Columbian Central and North America was tied to the spread of squash agriculture.

Using genetic markers, researchers have for the first time shown how cultivating a specific crop led to the expansion of a pollinator species. In this case, the researchers found that the spread of a bee species in pre-Columbian Central and North America was tied to the spread of squash agriculture.

“We wanted to understand what happens when the range of a bee expands,” says Margarita López-Uribe, a postdoctoral researcher at North Carolina State University and lead author of a paper describing the work. “What does that mean for its genetic variability? And if the genetic variability declines, does that harm the viability of the species?”

To explore these questions, researchers looked at the squash bee (Peponapis pruinosa), which is indigenous to what is now central Mexico and the southwestern United States. Squash bees are specialists, collecting pollen solely from the flowers of plants in the genus Cucurbita, such as squash, zucchini and pumpkins.

Before contact with Europeans, native American peoples had begun cultivating Cucurbita crops. Over time, these agricultural practices spread to the north and east.

“We wanted to know whether P. pruinosa spread along with those crops,” López-Uribe says.

To find out, researchers looked at DNA from squash bee individuals, collected from throughout the species’ range. P. pruinosa can now be found from southern Mexico to California and Idaho in the west, and from Georgia in the southeast to Quebec in the north.

By assessing genetic markers in each bee’s DNA, the researchers could identify genetic signatures associated with when and where the species expanded.

For example, the researchers found that P. pruinosa first moved from central Mexico into what is now the Midwestern United States approximately 5,000 years ago, before expanding to the East Coast some time later.

Given the declining genetic variability, researchers expected to see adverse effects in the “newer” populations of P. pruinosa.

“We were specifically expecting to see an increased rate of sterile males in populations with less genetic variability, and we didn’t find that,” López-Uribe says. “But we did find genetic ‘bottlenecks’ in all of the populations – even in Mexico.

“Because P. pruinosa makes its nests in the ground near squash plants, we think modern farming practices – such as mechanically tilling the soil – is causing the species to die out in local areas,” López-Uribe says. “And we think that is causing these more recent genetic bottlenecks.

“I’m hoping to work on this question in the near future, because it’s important to helping understand the relevant bee’s population dynamics in modern agricultural systems, as well as what it may mean for Cucurbita crops,” López-Uribe says.

The paper, “Crop domestication facilitated rapid geographical expansion of a specialist pollinator, the squash bee Peponapis pruinosa,” will be published in Proceedings of the Royal Society B at 00:01 BST on June 22. The paper was co-authored by James Cane of USDA-ARD in Logan, Utah; Robert Minckley of the University of Rochester; and Bryan N. Danforth of Cornell University. The paper was done with support from the National Science Foundation under grants DEB-0814544 and DEB-0742998.