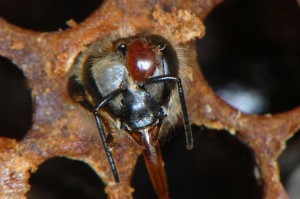 The importance of controlling varroa populations especially in areas of relatively dense bee colonies was stressed by Dr Dennis vanEngelsdorp at the BBKA Spring Convention earlier this month.

A sick colony explodes into the landscape and infiltrates surrounding apiaries, he said.

He identified the three key risk factors to bee health as varroa mites and associated viruses; pesticides in the field and in the hive; and poor nutrition.

Of these varroa is the biggest threat – and he and a research student soon expect to publish a paper showing that varroa mites feed off the fat rather than the haemolymph of honeybees – a factor that is of considerable importance for bees going into winter.

In a sample survey, he found that 56% of beekeepers had not used varroa-control products in the previous twelve months. For some hobbyists, not treating for varroa and losing, say, nine of ten colonies doesn’t matter too much. However, the impact does not stop at their own apiary.

In another study, he and his team marked bees in an apiary either yellow or blue. Yellow indicated that the colony was collapsing, blue that the colony was healthy. The collapsing colonies duly died out, but their surviving yellow-marked bees exploded like a bomb in the landscape. Those yellow bees were found in almost every apiary in a two-to-three-kilometer radius!

The implications are clear. You are treating for varroa not just to keep your own bees healthy, but also those of your neighbors in the surrounding landscape.

A specialty crop is not some kind of exotic plant, not an obscure herb or flower, specialty crops are quite simply the fruits and…